The Pacific Island region is made up of 22 island countries and the territories of Polynesia, Micronesia, and Melanesia. There is great cultural diversity in the region, with about 1,200 languages spoken and a variety of exotic cultures. Surrounded by the vast Pacific Ocean, the land mass of the countries varies considerably.
Comment 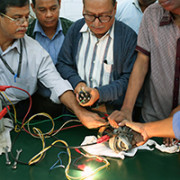 Research has demonstrated that in general, training has a positive impact on an individual’s labor market performance: wages grow faster after training, training has positive impact on employment security, and training increases the probability of re-employment after job loss. A recent adult skills survey released by the Organisation for Economic Co-operation and Development (OECD) in 2013 re-emphasized that adult learning or continuing education and training (CET) can play an important role in the development and maintenance of key information skills and the acquisition of other knowledge and skills that are necessary for keeping pace with the changing work environment.
Comment