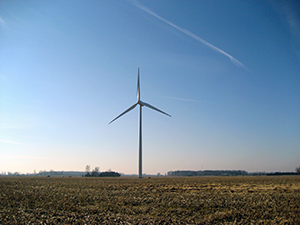 The Fukushima Daiichi nuclear disaster was an energy accident at the Fukushima No. 1 Nuclear Power Plant in Fukushima, Japan, initiated primarily by the tsunami that followed the Tohoku earthquake on 11 March 2011 and led to a nuclear shutdown in the country. Japan substituted the loss of nuclear power with fossil fuels, such as oil, gas, and coal, and became more dependent on their imports and consumption. Taghizadeh-Hesary, Yoshino, and Rasoulinezhad (2017) show that Japan’s energy security decreased because of an overdependence on fossil fuels due to a fall in the absolute value of the elasticity of oil consumption to oil prices in some economic sectors, such as the industry, non-energy, and transportation sectors. To raise energy self-dependency and energy security, Japan needs to diversify its energy supply resources. For instance, the share of renewable energy in Japan’s energy basket needs to increase. Banks are reluctant to finance renewable energy projects because they generally consider them to be risky. Instead, an innovative form of financing can be used for these projects—hometown investment trust funds (HITs). These have been introduced and applied in Japan and other parts of Asia.

In Japan, HITs were created as a new source of financing to support solar and wind power. The basic objective of HIT funds is to connect local investors with projects in their own locality in which they have personal knowledge and interest. Individual investors can choose their preferred projects and make investments through the internet (Yoshino and Kaji 2013). One of the major applications of HITs in Japan is for wind power and solar power projects, where they have been used to raise money from individuals (about $100–$5,000 per investor) interested in promoting green energy. By means of these funds, many Japanese investors have put small amounts of money toward the construction of wind power and solar power projects. The advertisement of these projects through the internet plays an important role in encouraging people to invest. Internet marketing companies can carry out marketing for these projects and guarantee that these renewable projects will be completed with minimal problems and mistakes. Local banks have started to make use of the information provided by HIT funds. If the projects are implemented properly and are well received by individual investors, banks can then start to provide loans for them. In this way, renewable wind and solar projects, which are generally considered to be risky, can be supported by HIT funds until they are able to borrow from banks. Therefore, the use of alternative financing vehicles, such as HIT funds, has assisted the growth of solar and wind projects in Japan, a country in which the finance sector is still dominated by banks (Yoshino and Kaji 2013; Yoshino and Taghizadeh-Hesary 2014).

HIT funds have spread from Japan to Cambodia, Viet Nam, Peru, and Mongolia. They are also attracting attention from the Government of Thailand and Malaysia’s central bank. Asia’s finance sectors are still dominated by banks, and venture capital markets are generally not well developed. However, internet sales are gradually expanding, and the use of alternative financing vehicles, such as HIT funds, will assist the growth of risky sectors in Asia.

Figure 1 provides an example of a financing scheme for renewable projects using HIT funds in Japan. The Hokkaido Green Fund was established in 2000 to finance wind power projects in northern Japan and was generated through donations. The fund encountered difficulty in raising money from banks. Only 20% of the total investment is financed by banks, and the other 80% comes from investments and donations by individual investors. The community wind power corporation generates wind power and sells the electricity to the power company, which supplies power to the region. In many cases, the price of the power produced by wind power is 5% higher than that of other forms of electricity. However, users are willing to pay 5% extra in user charges to help the environment. More than 19 wind power projects have been constructed using a similar method. For solar power, the local government has also contributed money to the community fund. 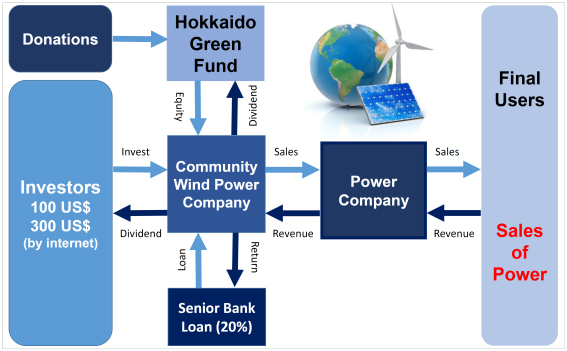 Another example is the revitalization of an old hydropower plant in Nara prefecture in Japan. The hydropower plant was constructed in 1914 but had since been decommissioned. The local community and individual investors raised money (at $300 for 1 unit of investment), and 274 individuals invested in the plant’s revitalization through HIT funds. The total cost was $500,000. The revitalized dam supplied electricity to 184 households, and the extra electricity was sold to the power supply company in the region.

Financing schemes similar to HIT funds can be applied for the development of renewable energy projects in the rest of Asia.

Photo: Fogonthedowns at the English language Wikipedia [GFDL or CC-BY-SA-3.0], via Wikimedia Commons