Importance of SMEs in the Thai economy 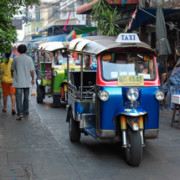 Small and medium-sized enterprises (SMEs) play a significant role in the Thai economy. In 2012 there were 2.7 million SMEs in Thailand (see Figure 1) comprising 98.5% of total enterprises. In the same year, SMEs accounted for 37.0% of gross domestic product (GDP) and 80.4% of the workforce. Thai SMEs also contributed to 28.8% of total exports and 31.9% of total imports by value in 2012.
Comment