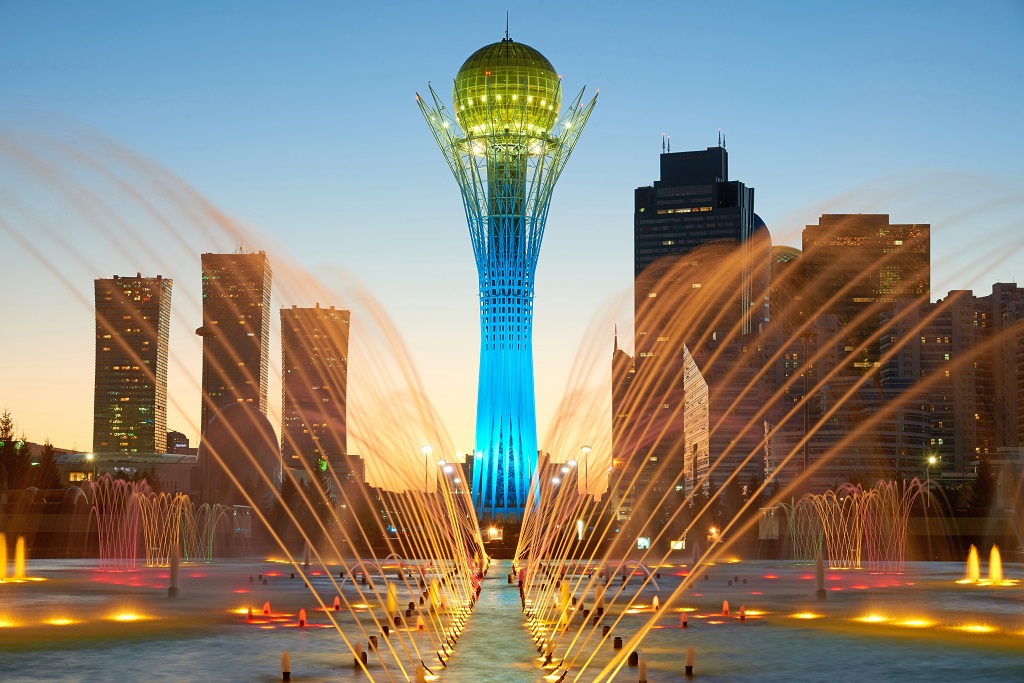 With the arrival of the new year, innovation will continue to play a vital role in the economic, social, and environmental progress of Asia and the Pacific. Over the last 60 years, the region’s rapid transformation has yielded the Asian “miracles” of Hong Kong, China; the Republic of Korea; Singapore; Taipei,China; and, more recently, the People’s Republic of China (PRC). While the determinants of such transformation have been the subject of much research and debate (Sarel 1997), innovation in some form is generally accepted to have been an important factor in the region’s success stories. Although the region’s rapid growth has been concentrated in East Asia, the next generation of Asian miracles will likely consist of innovation dynamos from Southeast Asia and South Asia. At the same time, however, many countries in the region lag behind, innovating at a fraction of the pace as countries in similar or even lower income groups. Comparing the stalled and speedy innovators may point to lessons to help drive innovation forward in Asia.

Innovation may be differently defined depending on the context. While innovation usually refers to a new product or process, the original Latin root, innovare, means to renew or alter (Oxford Languages). This is an important distinction for developing country contexts, where innovation does not necessarily refer to something new in the absolute sense but more likely an adapted product or process that is new to a given society. But an emphasis on “newness” as a prerequisite for innovation is not common to all definitions. Others suggest that innovation must add value (Skillicorn 2016), while others emphasize dissemination (World Bank 2010).

There are various indices that rank countries according to their innovation levels and use different data sets depending on the characteristics of innovation under consideration. Perhaps the most widely used is the Global Innovation Index (GII), produced by the World Intellectual Property Organization, which ranks countries based on scores derived from innovation input and output indices. The latest edition, the GII 2021, was released in September 2021. Although the GII seeks to capture a complete picture of innovation, the authors acknowledge that measuring innovation outputs is difficult, and “hence great emphasis is placed on measuring the climate and infrastructure of innovation.” This article uses and adapts the GII 2021 to focus on the state of innovation in Asia (World Intellectual Property Organization 2021).

Figure 1 provides a representation of the scores for all Asian economies in the GII (N=27). Economies without sufficient data, such as Afghanistan and Pacific economies, are not included in the index. The figure presents the economies in order of increasing gross domestic product (GDP) per capita and shows the total values of the GII’s five innovation input indicators: human capital and research, institutions, infrastructure, market sophistication, and business sophistication; and two innovation output indicators: knowledge and technology, and creative outputs. While all Asian economies have been included for completeness, this analysis is mainly concerned with lower- and middle-income economies; hence, the five high-income economies, from Japan to Singapore, will not be the focus of the analysis. The remaining 22 economies are considered as two groups: from 1–10 as the lower-income group and 11–22 as the middle-income group. 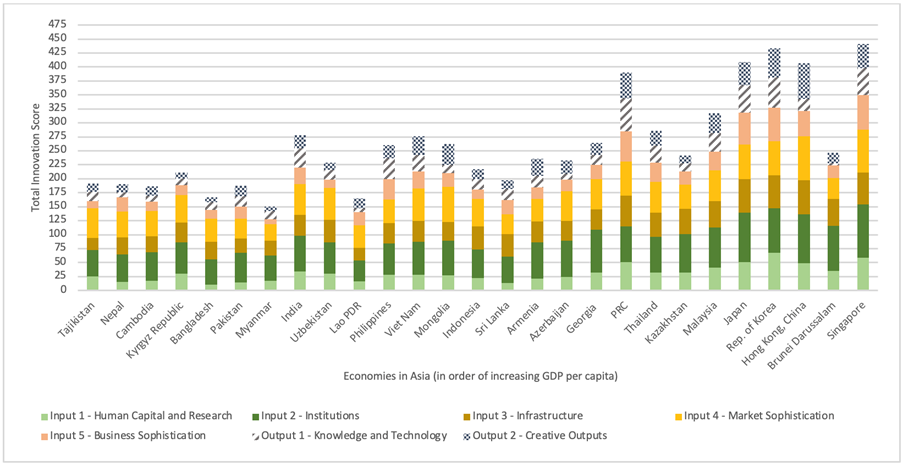 The innovation input scores are represented by colors and the output scores by patterns to clearly differentiate between the key drivers of innovation and their outcomes. When ordered by GDP per capita, the innovation overachievers and underachievers become apparent. The PRC and India are clear overachievers, and this has been well documented. This analysis will highlight the lagging innovators in an effort to draw out lessons for changing course. Specifically, the analysis looks at economies with overall low levels of inputs that are, thus, failing to achieve satisfactory innovation; and also countries with generally acceptable levels of inputs that are struggling to convert these to actual innovation. An example of each will be drawn from the previously described lower-income group of economies and also from the middle-income group.

From the lower-income group, the Lao People’s Democratic Republic (Lao PDR) stands out for having the lowest level of aggregated innovation inputs across Asia and ranks 123 out of 132 in the GII 2021. Of the five input subindices, it scores the lowest for institutions, particularly business environment. It is vital for the Lao PDR to improve the ease of doing business in the country, particularly to counter the negative effects of the coronavirus disease (COVID-19) pandemic on firms and small businesses (World Bank 2021). Relative to its geographic neighbors and income group peers, its score for human capital and research is also noticeably low. On the upside, Lao PDR has a young population, with over half of its population in the range of 10–35 years old (Valdivieso 2020). By investing in human capital and research for its youth, the Lao PDR could tap the enormous potential of its demographic dividend and substantially improve its innovation output.

The Kyrgyz Republic stands out among its lower-income peers for having a high level of innovation input. However, the resulting innovation output is quite low. While its rank for expenditure on education (% of GDP) is far above its income ranking, 16 out of 132 in the GII 2021, this outstanding input is not generating strong innovation output, partly due to a weak political environment, which discourages innovation activity. Also, the country’s inadequate research and development (R&D) expenditure (% of GDP) and lack of university–industry R&D collaboration prevents it from realizing the potential of its impressive overall expenditure on education. Strengthening these pillars of innovation could put the country on a stronger economic growth trajectory.

From the middle-income group of economies, Sri Lanka stands out for having the lowest aggregated score for innovation input. In the past, the country was viewed as a success story in human capital development, owing to the strong commitment by successive governments to the provision of universal education (Venuganan 2021). However, for the human capital and research pillar of the GII 2021, it ranks 118 out of 132 economies, with low scores across all aspects of the pillar: education, tertiary education, and R&D. Once a strength for the country, the last decade has seen a significant decline in expenditure on education. Currently, Sri Lanka faces a crisis of high youth employment, while many jobs remain vacant due to a lack of qualified graduates, particularly in the science and technology sectors. Venuganan (2021) indicates a skills mismatch in the country, with the majority of graduates coming from the arts stream while science, medicine, and technology graduates make up less than 15% of the total cohort. Persistent weaknesses in human capital and research inputs will continue to hamper Sri Lanka’s innovation outcomes, which are critical for the country’s industrial transformation.

The innovation output of Kazakhstan, also a middle-income country, falls well below that of its income peers. Its innovation inputs rank 61 out of 132 in the GII 2021, while its outputs rank only 101. The country’s reliance on natural resources for income has led to the underdevelopment of key aspects of innovation, making it an inefficient innovator. Although Kazakhstan does well on some aspects of human capital development, it needs to boost its overall expenditure on education as a share of GDP, as well as its gross expenditure on R&D. The latter could then help boost its lagging innovation linkages, such as its state of cluster development. Furthermore, there should be a focus on improving aspects of its market sophistication, particularly concerning the availability of domestic credit, which would help boost private sector participation, toward a more diversified and competitive economy.

While the GII 2021 does well to highlight success stories and shifting patterns in innovation, for Asia, it is also important to focus on lagging innovators in an effort to identify policy options that can help to correct the region’s course. This analysis has focused on two types of lagging innovators: those with very low levels of innovation inputs, and those which struggle to convert inputs to innovation outputs and outcomes. The four economies highlighted represent different income levels and development trajectories, though all four showed deficiencies in one or more aspects of human capital and research, hence indicating their importance for innovation as 2022 gets under way.

Venuganan, P. 2021. Addressing the Fault Lines in Sri Lanka’s Human Capital Base for COVID-19 and Beyond.

Linda Arthur is a senior project management specialist at the Asian Development Bank.
View all posts by Linda Arthur →
← Circularity of plastics: From managing waste to generating less waste
Building public trust for managing the pandemic’s psychological impacts in the Philippines →

One Response to Levelling up innovation in Asia