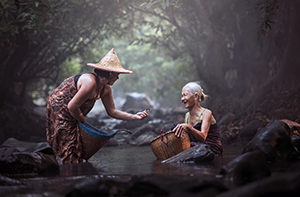 The fiscal burden of public pensions in most emerging Asian economies is relatively small, reflecting relatively young populations and limited coverage of the retired-age population in public pension programs. Nonetheless, these conditions are likely to change dramatically in the coming decades. First, many Asian economies will face rapidly aging populations, which will raise pension and other old-age-related spending substantially. Second, as economies develop, political pressures to expand the coverage of public pensions and raise the level of pension benefits relative to income will likely increase.

Despite this daunting prospect, there have been relatively few studies of forecasts of public pension spending by emerging Asian economies. The Organisation for Economic Co-operation and Development (OECD) has published extensively on the prospects for its member countries (e.g., OECD [2013]), but, aside from Japan and the Republic of Korea, which are OECD members, its analysis of Asian economies has only covered the People’s Republic of China (PRC), India, and Indonesia, i.e., the other Asian members of the G20. The International Monetary Fund (2011) only covers five emerging Asian economies: the PRC, India, Indonesia, Malaysia, Pakistan, the Philippines, and Thailand.

Our recent study (Morgan and Trinh, 2017) aims to extend this work to a much broader and less-analyzed set of Asian countries. Our study has four aims: (i) to identify the current status of public pension spending in Asia; (ii) to develop models to explain public pension spending in Asia in terms of basic economic and demographic variables; (iii) to use the models to forecast the likely developments of spending on public pensions in 23 emerging economies through 2030 as a result of demographic and income trends; and (iv) to recommend policies to expand the financial capacity of emerging Asian economies to cover such expenditure increases.

In addition to covering many more emerging Asian economies than previous studies, our study explicitly models changes in the pension coverage (eligibility) ratio and in average pension benefits. (In contrast, the forecasts by the International Monetary Fund (2011) assume a constant coverage ratio.) Also, our study utilizes the latest data from the ADB Social Protection Index database and World Bank Pensions database.

We then used these models to project the level of average pension benefits per beneficiary, the share of the retirement-age population eligible to receive pension benefits, and the share of public pension expenditure in GDP in 2030. For the latter, we used two different projection methodologies.

Figure 1: Public Pension Spending as a Share of GDP: 2030 projections, Methods 1 and 2 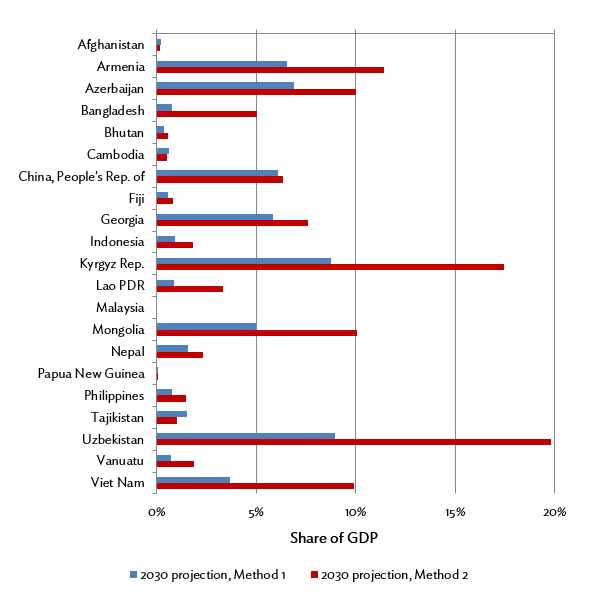 The second method (Method 2) estimates the share of pension benefits in GDP by the following identity:

ppenex/gdp = share of public pension expenditures in GDP
gdppc = GDP per capita (in 2010 US dollars)
ppenex/benif = average benefits per beneficiary (in 2010 US dollars)
retpop/pop = share of population of retirement age (normally aged 65 or over, but varies by country depending on the retirement age) in total population
coverage = ratio of pension beneficiaries to retirement-age population
and ppenex/benif and coverage are estimated by the regression equations described in the previous section. The other values are obtained exogenously as in Method 1.

To be sure, these estimates are still very crude. They do not attempt to distinguish between different kinds of public pension programs—only overall average expenditures and coverage. The accuracy of the regression estimates is limited due to the scarce number of observations. Better data availability would allow for greater refinement of the analysis.

Nevertheless, we believe that countries have the capacity to overcome these challenges and provide adequate public pension coverage for their populations. Risks to medium-term fiscal sustainability can be reduced by the timely adoption of various measures, including those directed specifically at social insurance programs and those more generally aimed at improving fiscal management. These include: enhancing the efficiency of social insurance programs; improving the balance of revenues and expenditures; implementing more explicit fiscal rules; and establishing stronger fiscal surveillance at the national and regional levels. However, it is important to start strengthening social protection systems early on to prepare for the aging of the populations in the region.
_____

Trinh Q. Long is a project consultant at the Asian Development Bank Institute.
View all posts by Trinh Q. Long →

← Distortions, growth catch-up, and the middle-income trap
Is corruption “sand in the wheels” for credit markets? Evidence from European MSMEs →