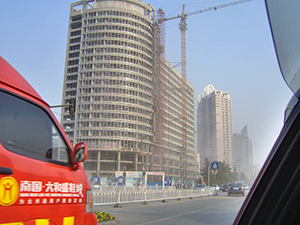 For a number of years, the central banks of the major advanced economies have pursued historically unprecedented ultra-low interest rate policies and negative interest rate policies. Facing the zero lower bound problem, they have also implemented various asset purchase programs, known as “quantitative easing,” with the aim of reducing long-term interest rates. There has been growing evidence that advanced countries’ unconventional monetary policies (UMPs) have caused significant spillovers to the financial markets of emerging market economies (EMEs). Importantly, the decline in short- and long-term government yields in advanced countries has contributed to the flow of investment funds into EME assets with higher risk-adjusted returns. Such additional flows of funds into emerging market bonds may influence domestic monetary conditions by altering long-term yields in emerging economies. Furthermore, some EMEs have experienced increases in foreign investment in conjunction with growth in both the liquidity and principal outstanding in their local currency government bond markets, potentially increasing the link between foreign and domestic interest rates via portfolio reallocations between developed and emerging bond markets.

Against this backdrop, in a recent study (Belke, Dubova, and Volz 2017), we investigate the evolution of spillovers from advanced countries’ bond markets to EMEs. To gauge the long-term interest spillover effects, we used vector autoregressive variance decompositions with daily data for eight Asian emerging economies (the People’s Republic of China; India; Indonesia; the Republic of Korea; Malaysia; the Philippines; Taipei,China; and Thailand) as well as Hong Kong, China; the United States (US), the eurozone, and Japan for the period May 2003–September 2016. In contrast with previous studies that examine monetary policy spillovers to EMEs, we use high-frequency data, the dynamics of which are less affected by macroeconomic fundamentals. This is advantageous for identifying spillovers in financial markets, where news is priced rapidly. Given the much larger number of observations compared to using data of a lower frequency, we are also able to better analyze the time variations in the spillovers and detect sudden changes in transmission magnitudes.

Our results reveal that sovereign bond yields in emerging Asia at times responded significantly to changes in US and eurozone bond yields, although the magnitudes were heterogeneous across economies (Figure 1). This may be due to the different transmission and adjustment mechanisms in emerging Asian economies, which could, in turn, explain the cross-country differences in macroeconomic performance, e.g., output and credit growth. Spillovers from Japan were also sizable for a few Southeast Asian economies but were of a lower magnitude. In all cases, the magnitude of the spillovers varied over time. The patterns of these variations can be attributed in part to the implementation of different UMP measures in advanced economies. Generally, we observe the intensification of spillover effects on emerging markets during the UMPs, supporting the notion of the “new normal” for the recent international financial system. 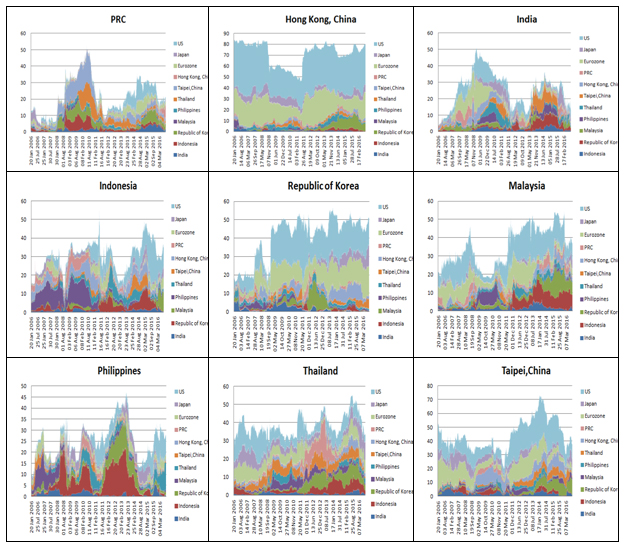 Our findings clearly suggest that the notion of a “decoupling” of emerging Asian economies and their financial markets from the US or Europe remains an illusion. Spillovers from US bond markets, in particular, were already sizable before the start of the Fed’s UMPs, and they have become larger since.

It is also notable that the spillover index for the PRC remained low throughout, suggesting that even recently, Chinese bond market developments have not had an impact on other markets in the region. That is, despite the PRC’s weight in the regional and global economy, international spillovers from its bond markets appear limited for the time being, a result of the relatively small size of the country’s sovereign bond market and also a consequence of the still comprehensive controls on portfolio investment flows. This does not, of course, imply that developments in Chinese financial markets do not matter for the rest of Asia—as illustrated by the stock market upheavals during 2015–2016, they do—but for the time being, bond markets apparently do not. Looking forward, one may expect this to change with the growing importance of yuan-denominated assets in regional financial markets and the potential further opening-up of the PRC’s capital markets.

What do the spillovers imply for macroeconomic policy in emerging Asian economies? While calls have been made by Asian policy makers for greater international monetary coordination to limit such spillovers (e.g., Rajan [2014]), the mandate for achieving domestic economic targets for both the Fed and the European Central Bank effectively limits substantial international monetary cooperation to exceptional circumstances, such as financial upheavals of a global scale. The consequence is that emerging Asian economies will have to continue learning to live with such policy spillovers. If central banks are constrained in their ability to control domestic long-term interest rates, the whole arsenal of macro-prudential policies and capital account management must be used to try to control domestic credit creation and safeguard long-term financial stability.
_____