As economies in East Asia and the Pacific (EAP) have developed, they have also become important in international financial transactions, both as sources and destinations of cross-border bank lending, foreign direct investment (FDI), and portfolio investments. But, as we document in a new paper (Didier, Llovet, and Schmukler 2017), the composition of these financial connections has been changing in recent years on at least two fronts: (i) the partners with which EAP countries interact, and (ii) the type of financial transactions conducted.

EAP countries also have strong connections among themselves. That is, EAP economies are important sources and destinations for intra-EAP cross-border financial investments. Although EAP economies are more financially integrated with global markets than with regional ones, intra-regional investments are actually larger than those with the South, and, in the case of FDI, they are as large as those with the North. Moreover, the EAP stands as the most regionally integrated region in both the intensive and extensive margins when compared to Latin America and the Caribbean, Europe and Central Asia, South Asia, Sub-Saharan Africa, and the Middle East and North Africa.

Another notable feature of the EAP’s international financial integration is the differences in how it connects with different types of countries. EAP economies are relatively more connected intra-regionally and with the South via FDI, whereas they are more connected with the North in arm’s length investments (portfolio investments and syndicated loans). These existing differences in financial integration patterns across investment types can be related to the relatively less developed financial markets in the EAP and the South vis-à-vis those in the North.

The recent trends come with benefits but also possible risks. On the one hand, the EAP can benefit from greater financial diversification, which reduces the concentration and dependence on North economies. Moreover, as far as economies in the region are more familiar with the institutions and cultures of other EAP economies, greater regionalization can foster financial inclusion by serving smaller and less informationally transparent segments. On the other hand, the EAP could also bring imported volatility from the newly connected economies. In addition, increasing regionalization can imply a higher exposure of an economy to shocks originating within the region and a faster spread of foreign shocks once they hit an economy in the region.

Furthermore, to the extent that financial institutions in the South and the EAP are less tightly regulated than those in the North, the latest developments can negatively affect the stability of the overall financial system. Therefore, a call for more intensive cross-border cooperation would be desirable for global financial stability.

Differences across financial instruments suggest that as the EAP continues to grow and become richer, its patterns of financial integration will more closely resemble those of the North, with less relative emphasis on FDI and more on portfolio and bank investments. Although this type of arm’s length financing arises naturally in more developed countries and is a conduit for more sophisticated transactions, it can have an impact on financial stability as FDI is perceived to be more resilient when negative shocks occur. 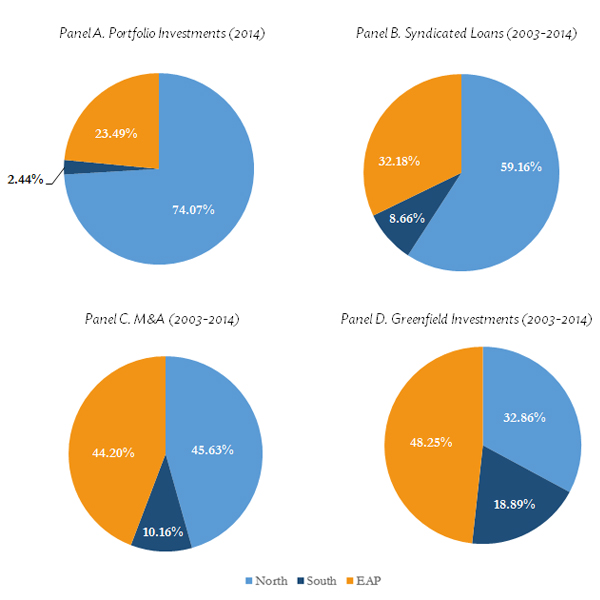 EAP = East Asia and the Pacific, M&A = mergers and acquisitions.
Note: This figure shows the share of North, South, and EAP economies in the total value of the EAP’s cross-border financial investments (considering investments with the North, the South, and with itself).
Source: Didier et al. (2017).
_____

Photo: By Jonathunder (Own work) [GFDL 1.2], via Wikimedia Commons

Tatiana Didier is a research economist in the World Bank’s Office of the Chief Economist for Latin America and the Caribbean.
View all posts by Tatiana Didier →

Ruth Llovet Montanes is a research analyst at the Macroeconomics and Growth Unit of the Development Research Group in the World Bank.
View all posts by Ruth Llovet →