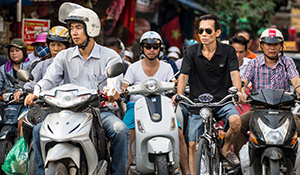 Africa and Asia are latecomers to urbanization. In these two continents, less than half live in urban centers, while elsewhere, more than 70% of people do. But Africa and Asia are now rapidly urbanizing, with Asian cities growing at an average of 1.5% per year and Africa’s at 1.1% per year.

While the world’s largest megacities of 10 million people or more are in Asia, Africa’s urban populations have been catching up (Table 1). Incoming residents are competing for new financial and social opportunities but are placing increasing demands on city resources and services.

Table 1: Ten Most Populous Cities in Africa and Asia 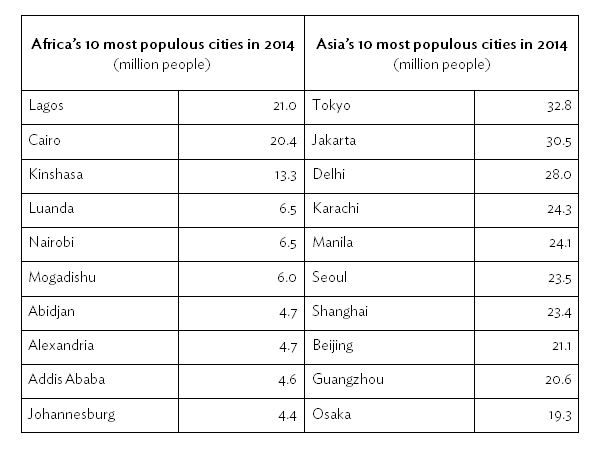 Increasingly, the importance of the transferability of Asian experiences to other regions is being recognized for more efficient development paths.

Well-planned urbanization can boost growth. Last October, the United Nations Conference on Housing and Sustainable Urbanization in Quito adopted a New Urban Agenda that considered it a key development driver (UN-Habitat, 2016). But cities must be also be designed to be safe, inclusive, accessible, and green, and this requires complex, integrated planning—often beyond the ability of bustling new cities.

Urbanization, however, does not always guarantee success. If poorly planned or managed, people can end up living in slums without basic sanitation and with high rates of crime and pollution. Once urbanization goes wrong, there is often no second chance to seize the opportunities missed.

The New Urban Agenda promotes affordable and sustainable housing, finance, and mixed-income housing to avoid segregation and stresses the need to adapt policies to local contexts. It recognizes different forms of tenure, such as co-housing and community land trusts, and encourages incremental housing and self-building schemes.

Good infrastructure is vital but poorly funded in Asia and Africa. Public–private partnerships have financed infrastructure in many Asian countries, although the returns have often had to rely on unpredictable fees and tolls. Still, some private investment is seeing profitable repayment in five or so years.

One way to boost returns is to tax positive spillovers from improved infrastructure. Asia and Latin America have found that better transport typically attracts manufacturing. This creates jobs and demand for services; attracts farmers and small businesses; and encourages better education, all of which enhance productivity and increase tax revenues. The Asian Development Bank Institute has proposed that governments might want to share such future revenues with original investors to increase their rates of return on projects. Without returning some spillovers to investors, many projects will not be as profitable and may never get off the ground.

After World War II, Japan took a three-pronged approach—establishing the public Housing Loan Corporation to facilitate construction, building rental housing for low-income groups, and boosting residential land supplies. The housing stock was restored by the 1960s. The Republic of Korea followed a similar strategy in the 1970s by expanding its land supply and increasing housing loans. In response to increased prices in the 1980s, the government launched a drive for two million homes. It was relatively successful in containing prices and avoiding real estate bubbles.

In Asia, small and medium-sized enterprises (SMEs) account for much employment and dominate the economy, especially in urban areas. With bank-dominated financial systems and underdeveloped capital markets, especially for venture capital, new and decentralized methods for SME financing in Asia are crucial.

One new form of financing is hometown investment trust funds, which have been adopted as a national strategy in Japan. These give credit ratings to SMEs, limiting the risk to the lender and allowing SMEs access to capital. By employing statistical analysis of financial variables for 1,363 SMEs, Japan found that banks could lend to group SME customers, adjust interest rates, and set loan ceilings for each group. If similar systems were set up across Asia and Africa, SMEs could raise funds from banks more easily and gain access to debt markets by securitizing their assets and claims.

Latecomers to urbanization have found a major key to success is strong investment in education, sanitation, and health. Making urbanization inclusive for everyone is critical. In many growing cities, however, income inequality keeps increasing with negative impacts on health (Picket et al., 2015).

Child mortality, for example, tends to be higher where reliance on skilled birth attendants is low or where the prevalence of infectious diseases is high due to lack of hygiene or crowded living conditions. High child mortality can also indicate a lack of access to drugs (Mayer et al., 2005).

Similar factors can influence life expectancy. Income inequality can result in poor living conditions and stress (Moore, 2006). The poor may not have the means to pay for adequate health care or be forced to forego it altogether.

Asia has found that a small increase in the income of poor households can have a greater impact on health than an equivalent increase for the rich. As seen in Figure 1, infant mortality tends to fall as income distribution becomes more equal. Child mortality is particularly high in Nigeria and South Africa, both of which have highly unequal income distributions. Egypt and several Asian countries, especially Japan and the Republic of Korea, have lower income inequality and lower child mortality. 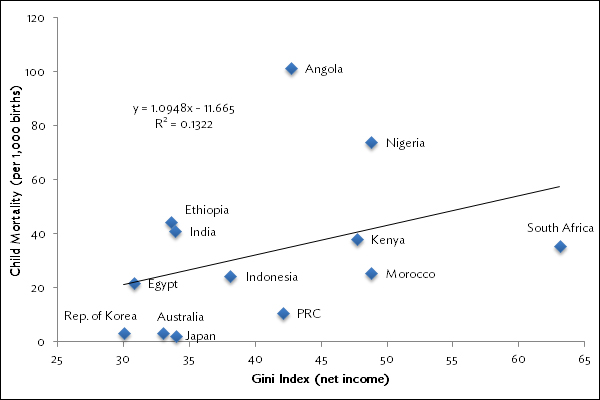 Africa and Asia face similar problems. Despite best intentions, one-size-fits-all plans, best practice solutions, and universal agendas to transplant ideas and institutions from one context to another do not always work. Promising approaches that have been tried and tested in Asia are nevertheless at hand.

Achieving sustainable urban development that promotes growth will become one of the most pressing questions policymakers face in Africa in the decades to come.

This is an abridged version of an article first published in the April edition of Africa in Fact [1], the quarterly journal of Good Governance Africa.
_____