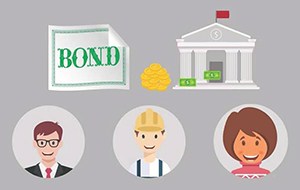 Everybody from President Trump to the Global Infrastructure Forum is trying to think of innovative ways to attract long-term private and institutional investors to pay for the huge and largely unmet demand for new highways, railways, and dams.

Promising ideas, including guarantees or gap funding, the concessional blending of finance, and bankability enhancements, have been tried but are not enough to convince overseas pension schemes or high net worth individuals to invest their idling funds in worthwhile projects, especially in emerging economies with untried issuers (Regan, 2017).

Yet, the potential higher returns over the long lifetime of infrastructure projects are an ideal match for institutional investors if only they can be convinced that well-structured developing country projects are close enough to an allowable asset class as, for instance, the benchmark United States (US) tax-free municipal bond market has been for decades.

For their part, governments of all stripes have come to accept the lesson that they should no longer incur further direct debt on their balance sheets. And most politicians are loath to impose new or higher taxes on the present users or potential customers of future infrastructure projects.

Private sector investors do have an appetite to take on a project if they trust the country’s political risk and legal environment, believe the issuer (or its parent) is reliable and creditworthy, and estimate that user charge revenue is solid enough to service their debt. But even well-planned projects in sophisticated and stable markets (recall the English Channel or the Sydney Harbour tunnels) can go awry; most often when customers do not take up the new infrastructure quickly enough, the tolls and user charges are set incorrectly or too impatiently in order to turn a profit, or both.

Although an emerging economy may have a reasonable project that looks like it has enough potential to make money over the medium to long term, the government still faces pressure to put in scarce fiscal resources to close the immediate (sometimes perceived) gap in the project’s viability or must agree in advance to fixed-availability payments to the operator and its investors. Many consider this as just another way of passing the ultimate-payer responsibility back to impoverished governments without tapping the new private-sector money, as we all want to see.

By using the difference-in-difference analysis method, a team of researchers led by Naoyuki Yoshino at the Asian Development Bank Institute has been able to compute in diverse settings, ranging from Japan, the Philippines, Uzbekistan, and India, the increases in tax revenues flowing from the spillover effects of newly implanted infrastructure.

The findings show that after an initial spike around construction, there tends to be a lag of a few years until a noticeable share of income from new business activities and increasing profits start flowing into the hands of the tax collectors (Yoshino et al., 2017). Not only are there frequently these adjacent economic spillovers in the project-affected areas but occasionally even spin-offs where unanticipated new opportunities, particularly in the fields of tourism and education, are opened up by transit infrastructure (e.g., access roads built for the Snowy Mountains hydroelectricity scheme fortuitously paved the way for a new and lucrative ski industry for Australia).

The difference-in-difference (DID) method does what its name suggests. The impact of a policy or a project on a certain outcome can be estimated by computing a double difference, i.e., one over time (before and after) and one across individuals or entities (between beneficiaries, the affected or treatment group, and the nonbeneficiaries, the non-affected or control group). Specifically, in its simplest form, when data are available for the beneficiaries and nonbeneficiaries for two time periods (before and after the operation of an infrastructure project, such as the opening of a highway), the method produces impact estimates. 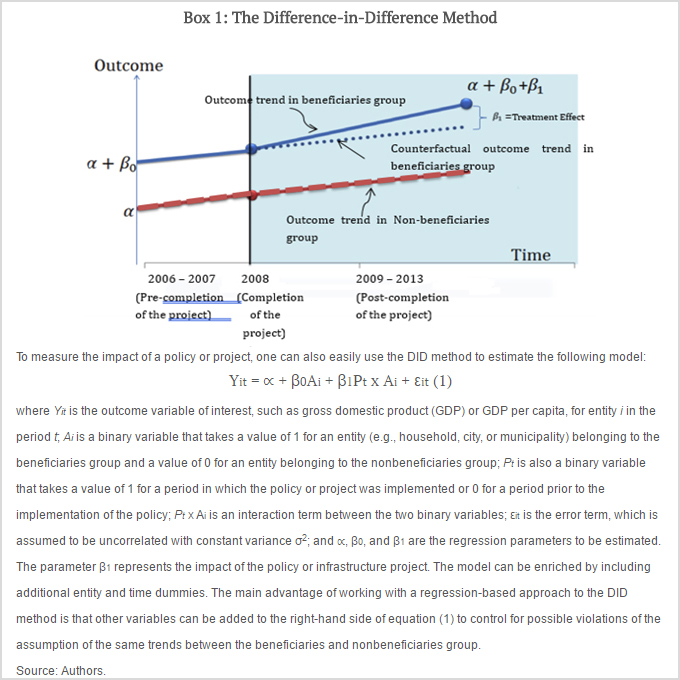 The immediate challenge lies in using the DID method to convince governments, tax authorities, bond rating agencies, and potential investors to start looking at the broader picture they are missing and begin to properly internalize all of the social and external aspects for fuller returns on investments. 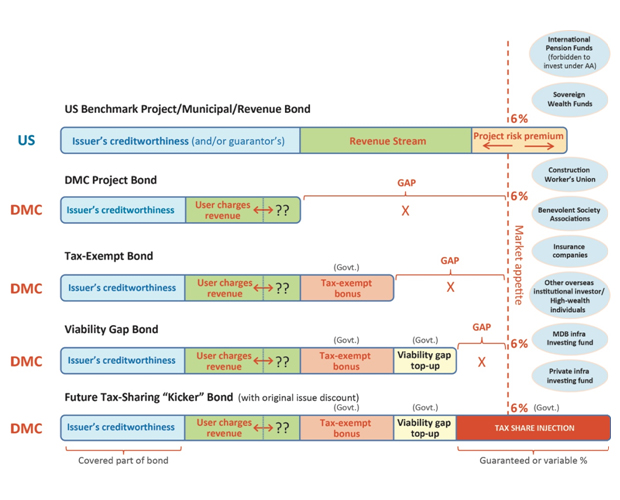 An infrastructure bond that can tap future tax revenues and share a fair proportion of the newly reaped revenue streams with the original investors could solve this problem. We have nicknamed it a “kicker” bond in honor of Oregon’s tax-rebate system in which budget surpluses are returned to state taxpayers (Oregon Department of Revenue, 2015).

Although this idea is new and untried, we have drawn upon useful elements from past experiences and prototypes to create its main features.

A forgotten factor in the successful servicing of massive debt incurred by private railway companies laying track in the US in the 19th century and Tokyo in the last century was the chance to sell or develop real estate adjacent to or as part of their rights of way (this is harder to do today where most land is already occupied and cannot be given away by the state as a sweetener for a public transport commission). In the postwar United States, the Highway Trust Fund demonstrated an effective way to ensure that a few cents on every tax dollar raised by gas sales were locked away for future use for the rehabilitation and maintenance of the interstate freeway system without the risk of raiding by the treasury for other purposes.

As part of the 2009 American Recovery and Reinvestment package for local infrastructure, two innovative types of Build America Bonds experimented with subsidies of 35% on the interest issuers owed investors, as well as refundable tax credits for bondholders. In Europe, the Gavi Vaccine Alliance proved it was possible to estimate and monetize an expected future stream of government cash-flows and bring them to the present day as capital for setting up a huge and vital social program. Backing these 5-year immunization bonds with government contributions pledged over 2 decades ensured the yield would be at least 30 basis points above similar-maturity US Treasuries; consequently, enabling new money raised from the markets to be spent immediately (Wood 2010).

Unlocking future value for present use

Just as the secret to unlocking the junk bond market was realizing there was unrecognized or underappreciated value in the securities of disfavored issuers, the kicker bond can scientifically prove that completely new sources of tax revenue coming from growing GDP around a new highway or railway—in the form of increased property tax values, new businesses tax, and even higher income tax brackets from better educated locals—are worth factoring into the calculation of the long-run benefits for proposed projects.

At this point, it might be instructive to distinguish the idea of future tax-sharing injections from current proposals on the table, such as tax credits, interest subsidies, or inducements to encourage repatriation of overseas profits. Our proposal is not a transfer payment from one taxpayer to another. And it does not take away from one budget category at the expense of an equally worthwhile spending choice.

Most importantly, future tax-sharing does not raise existing rates or impose new taxes or levies to get more money today for infrastructure spending. Instead, it relies on new sources of wealth and future tax growth revenues reasonably related and demonstrably connected to the introduction of the implanted infrastructure.

Presently all of these post-construction windfalls just get swept up by the tax collector into general revenues to be apportioned (maybe frittered away) on other priorities of a future government. If governments today accept that a small part of their future revenues should be promised up front to be fairly shared with the investors who put up most or all of the original capital, then we believe the funding gap can begin to be closed as more project bonds can show from the outset a higher rate of return that properly reflects their complete and enduring contribution to society.

Financial engineering is driven by new approaches to old problems, as the surprising success of green bonds and social or development impact bonds has shown us. Hopefully, the time of the kicker bond for infrastructure has arrived.
_____