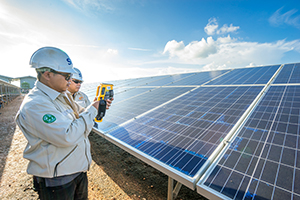 The solar photovoltaic energy market has seen huge growth in recent years. Unlike solar thermal energy, which harnesses heat from sunlight to generate electricity, solar photovoltaics or PV is a technology that converts sunlight directly into electricity. The annual worldwide solar PV electricity production increased from 4 terawatt hours (TWh) in 2005 to 247 TWh in 2015 (IEA 2017). In 2016, cumulative solar PV generated over 310 TWh, 26% higher than in 2015 and representing just over 1% of global power output. Moreover, the accumulated solar electricity plant capacity grew from 101 gigawatts in 2012 to 368 gigawatts in 2017 (Figure 1). One of the key drivers behind this growth is the reduction in solar module prices. Over the next five years, Solar PV is expected to lead renewable electricity capacity growth, expanding by almost 440 gigawatts.

Figure 1. Worldwide growth in cumulative capacity of solar photovoltaics from 1992 to 2017

Solar modules are the main component of solar photovoltaic systems. A solar module is composed of solar cells, which are small electronic devices that convert sunlight into electricity. A study by Kimura and Zissler (2016) shows that module cost makes up about 30–40% of the system cost in Japan and 50% in Germany. This suggests that the price of solar modules plays a large role in solar PV system development.

The price of solar modules has seen a huge drop worldwide in recent years. The People’s Republic of China (PRC), which dominates the solar module market today, saw a reduction from $5810 per kilowatts (kW) in 2007 to $570 per kW in 2015 and less than $350 per kW in 2017. However, a global comparison shows that there are differences in the speed of cost reduction (Figure 2). For example, Japan saw a drop from $3700 per kW in 2007 to $1140 in 2015. Here, the solar module price in Japan was initially cheaper than that in the PRC. However, in 2015, the module price in Japan was twice that of the PRC. To encourage the installation of solar electricity, analyzing the factors creating this difference is crucial. Thus, the price reduction mechanism in solar modules has become an important topic as the role of solar electricity in the overall energy supply and the market value of solar modules grow globally.

Figure 2. Prices of solar modules in five of the six top module producing countries in US dollars per watt, 1992 to 2015 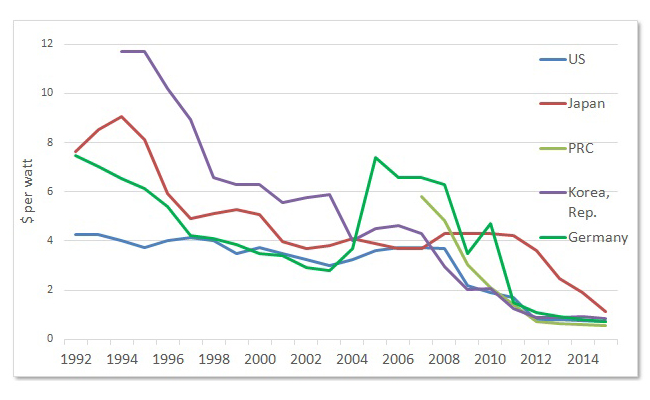 Many empirical analyses have been carried out to unveil the mechanism behind this price reduction. However, the research performed on the price reduction mechanism of solar modules over the years has focused purely on the technological aspect of manufacturing. When analyzing prices, the influence of economic factors such as interest rates and exchange rates must be taken into consideration to achieve a precise analysis.

Taghizadeh-Hesary, Yoshino, and Inagaki (2018) analyze the price reduction in solar modules by examining the impact of five economic factors on solar module prices in five countries from 1997 to 2016. The five countries are the PRC, Germany, Japan, the Republic of Korea, and the United States. The five factors are wages, real interest rates, exchange rates, research and development (R&D) expenditure, and oil prices.