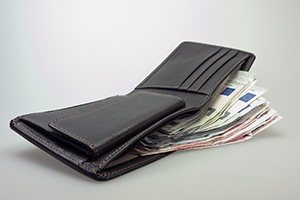 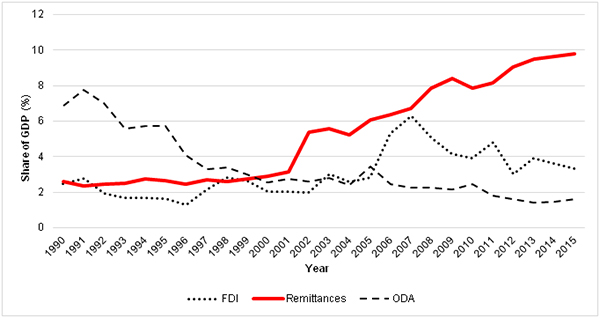 Yoshino, Taghizadeh-Hesary, and Otsuka (2017) examine the impact of international remittances on poverty reduction using panel data for 10 Asian developing countries over the period 1981–2014 to determine whether international remittances contributed to a reduction in various indicators of poverty in Asian developing countries. The countries examined were Bangladesh, India, Nepal, Pakistan, and Sri Lanka from the South Asia region, and the People’s Republic of China (PRC), Indonesia, Malaysia, the Philippines, and Thailand from the East Asia and the Pacific region.

The results show that a 1% increase in international remittances as a percentage of gross domestic product (GDP) is associated with a 22.6% decline in the poverty gap ratio and a 16.0% decline in the poverty severity ratio in the sample of the 10 Asian developing countries. However, international remittances do not have a significant impact on the poverty headcount ratio. This result could be because the poverty headcount ratio does not reflect the gap among the poor. There might be people who live on $1.90 per day, but at the same time, there might be people who live on $0.50 per day. Even if remittances are distributed to people in developing countries, those who receive the remittances might be from high-income families because of the significant costs of leaving their home countries and working abroad. This could lead to an expanding gap among the poor. Compared with the poverty headcount ratio, the poverty gap ratio and poverty severity ratio take into account the average poor household’s income or expenditure against the poverty line. Therefore, these two variables more closely reflect reductions in poverty and can be affected by international remittance inflows.

Reducing the costs of sending remittances can increase the disposable income of migrants and their families, which can accelerate the reduction of poverty in migrant-sending countries.

← Mergers and acquisitions and corporate innovation
Financial literacy and savings: Evidence from Cambodia and Viet Nam →