Rethinking the impact of the lockdown on micro, small, and medium-sized enterprises in the Philippines 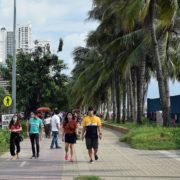 The National Capital Region (NCR) and four provinces in the Philippines have returned to enhanced community quarantine (ECQ) since 29 March 2021 due to surging cases of the coronavirus disease (COVID-19). The ECQ is the strictest measure for prohibiting the movement of people for nonessential purposes and strengthening curfews. The Philippine government moved to the ECQ, or lockdown, to contain the spread of COVID-19 quickly after the pandemic was identified in March 2020.
Comment

It is widely accepted that small and medium-sized enterprises (SMEs) represent the backbone of most economies. Not surprisingly, the story is mostly the same across the globe. For instance, Yoshino and Taghizadeh-Hesary (2014) report that SMEs account for almost 98% of all enterprises in Asia, offering jobs to around 66% of the workforce. In the European Union, the data offer a similar picture. In fact, SMEs represent 99% of all non-financial enterprises and account, on average, for 67% of total employment (European Commission 2017). Overall, such figures undoubtedly highlight how pivotal SMEs are for the functioning of the real economy.
Comment