Achieving a peaceful world: What can intellectuals do to make it happen? 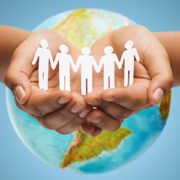 The coronavirus disease (COVID-19) has brought the world together, although in a somewhat disturbing manner. Every individual on the planet is hoping for relief from the pandemic via a cure for the afflicted and a vaccine for prevention. Notwithstanding the urgency of addressing this immediate problem, the world economy and society should use this challenge to undertake initiatives that last longer and hopefully forever.
Comment

Medical experts and institutions tell us that a critical but simple lifesaving action to reduce vulnerability to COVID-19 is literally in our own hands—regular handwashing with soap. Public awareness efforts underscore the need for greater behavioral compliance.
Comment

Since its inception in Japan in 1964, high-speed rail (HSR), and its impact on the economy, has received attention from policymakers worldwide. Early HSR development was more of a race to go faster, and the early success led policymakers around the world to believe in the power of HSR for catalyzing growth.
Comment

The Smart Cities Mission, launched by the Government of India, aims to transform the urban governance ecosystem, especially urban local bodies (ULBs). It is hoped that the mission will help attract innovation, expertise, and financial resources for the holistic development of the ever-expanding urban areas. The creation of sector-focused, region-specific “special purpose vehicles” (SPVs) is an attempt to unleash the potential of a consortium-based approach in delivering the interdisciplinary ideation and implementation of projects.
Comment