The triple burden of malnutrition in early childhood 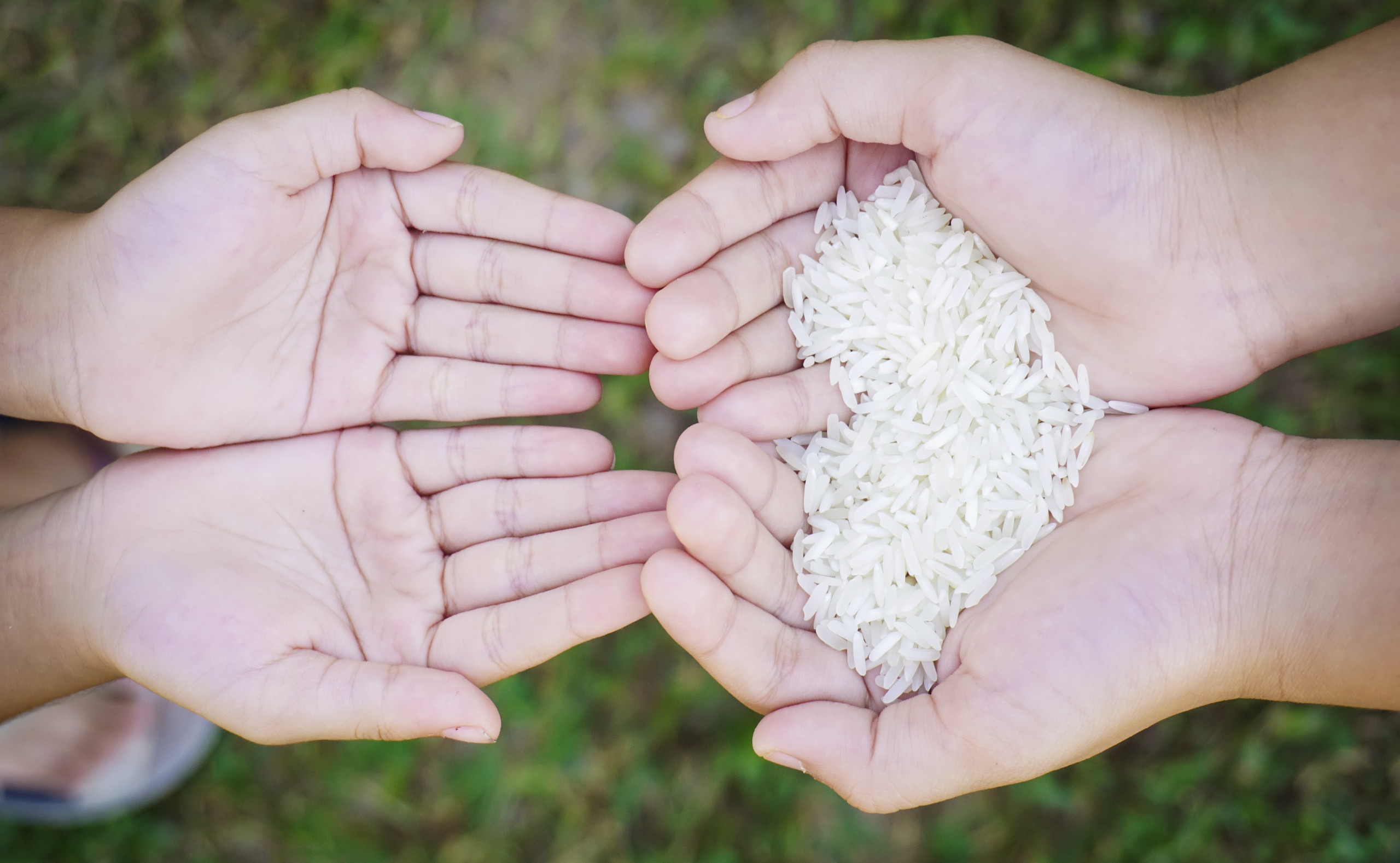 The World Health Organization (WHO) defines malnutrition as imbalances in the dietary intakes of individuals that can cause deficiencies and excesses. It covers two broad issues—undernutrition and overnutrition (overweight, obesity, and diet-related noncommunicable disorders). The severity of child undernutrition is determined by the growth-faltering parameters of stunting, wasting, underweight, and micronutrient deficiencies, while overweight/obesity is defined as having a high body mass index and is linked to metabolic disorders, including diabetes, stroke, and cancer.

Despite significant progress and investment by national governments and international agencies to alleviate undernutrition, a large number of children under 5 suffer from undernutrition (Figure 1). The problem of undernourishment is also concentrated particularly in Southeast Asia and Africa.

Figure 1: Prevalence of Malnourishment in Children under 5 by Region (%) 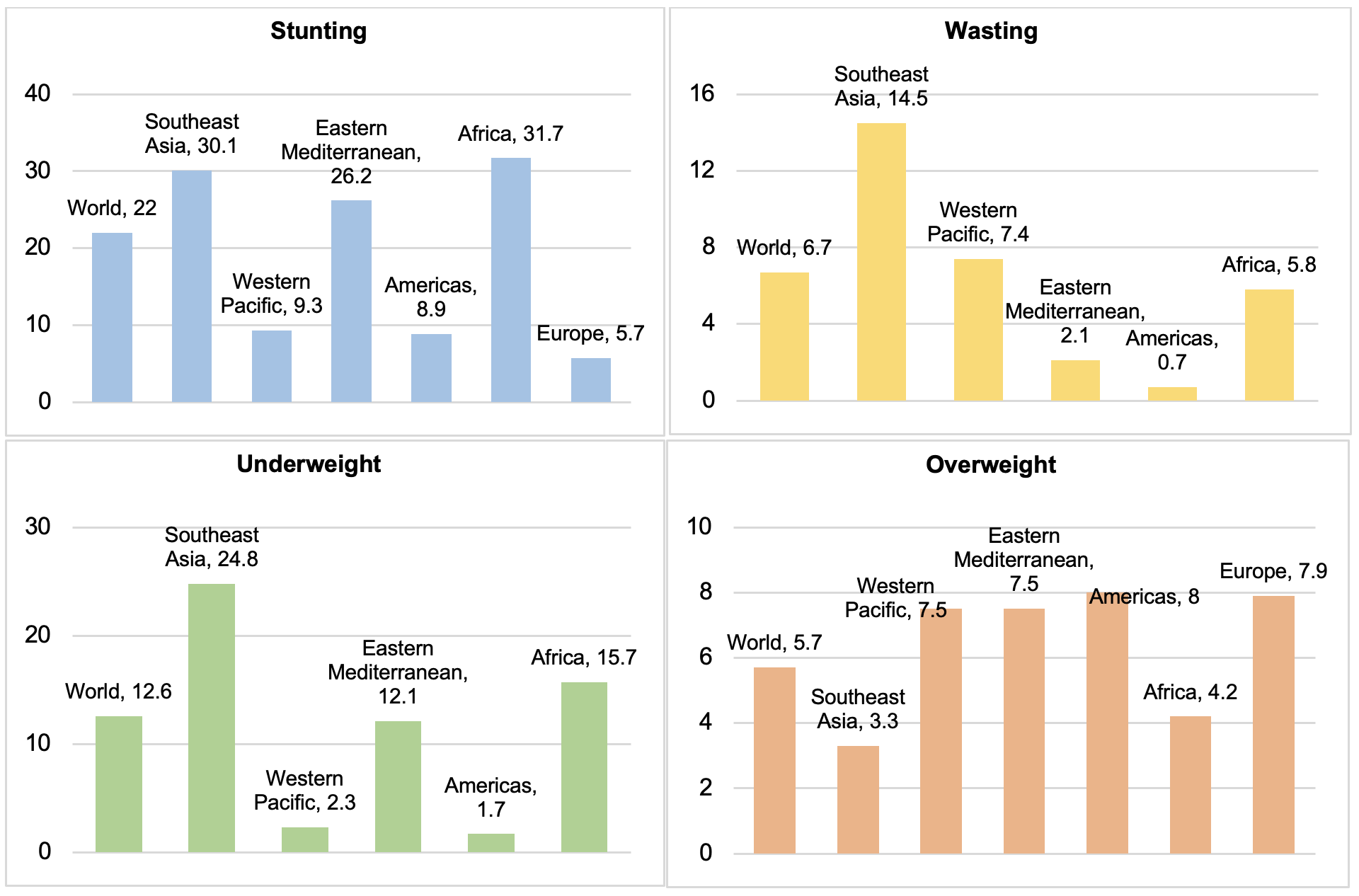 Undernourishment: A long-standing problem facing children in the developing world

Underweight refers to low weight to age and captures short-term loss. Magnitudes remain high despite improvements in most indicators over the past few decades (Figure 2). In 2020, the WHO reported 149 million stunted children under 5 and 45 million suffering from wasting worldwide.

Figure 2: Global Trend of the Triple Burden of Nutrition in Children under 5 (%) 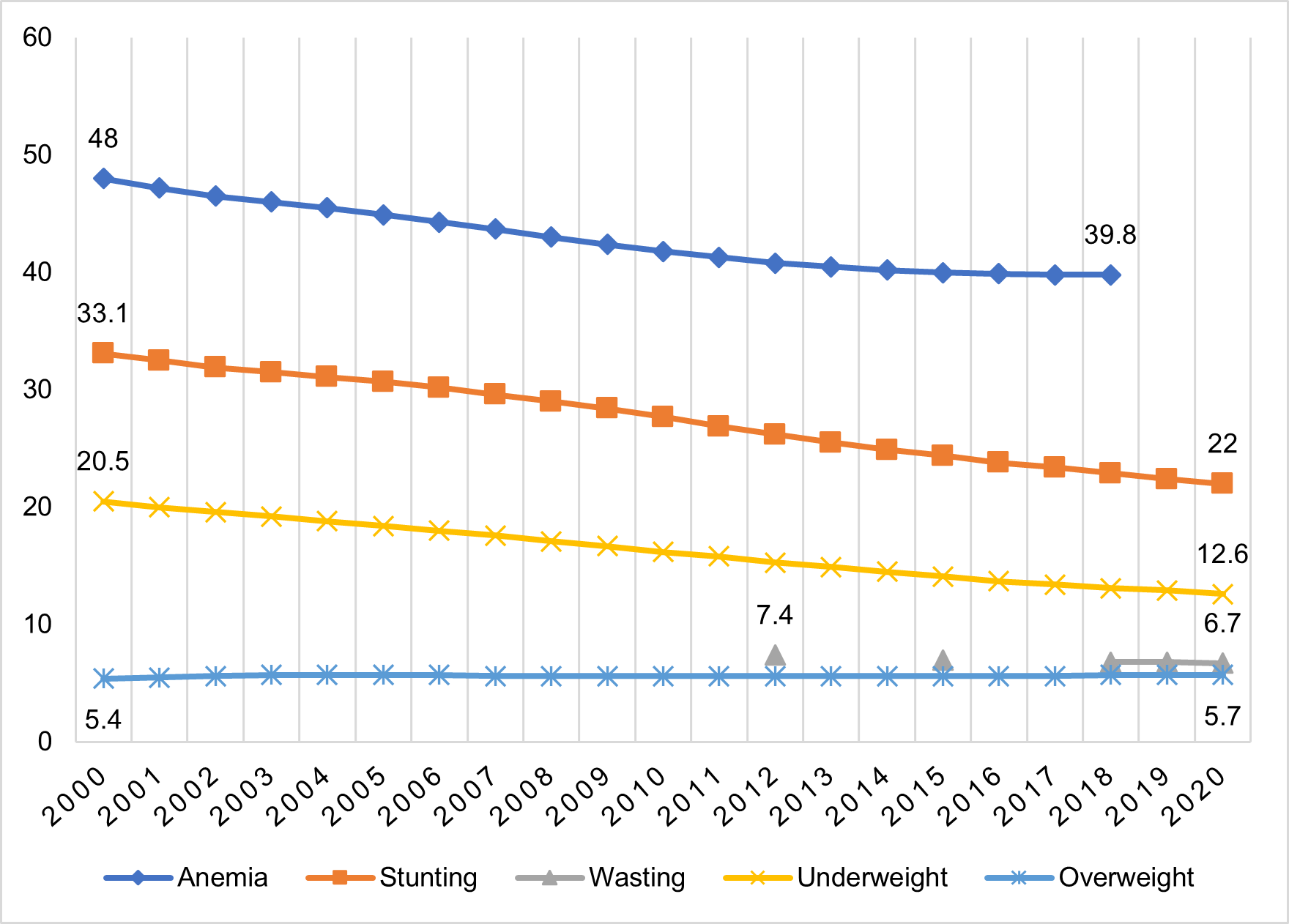 Note: Undernourishment in children is measured as inadequate growth during the first 5 years of life. Stunting is an indicator of long-term deprivation and refers to the poor linear development of a child for their age. Wasting is measured as low weight for height and represents acute undernourishment due to illnesses or a scant diet.
Data source: World Health Organization. Global Health Observatory. https://www.who.int/data/gho/data/indicators/indicator-details (accessed 29 November 2022).

Undernutrition not only impairs children’s initial growth years but also impacts their health and economic prospects for the remainder of their lives (Nugent et al. 2020). Evidence suggests that it makes them highly susceptible to obesity and metabolic disorders in adulthood and causes the inter-generational transmission of malnutrition (Sawaya et al. 2003).

Overweight and obesity: No longer only a problem for the developed world

Previously thought as a problem only in high-income countries, being overweight has become a common problem in low- and middle-income countries at the same time as undernutrition (see Figure 1). In 2020, the WHO estimated that around 39 million children under 5 years were overweight or obese, and almost half of them live in Asia.

Several studies have suggested that overnutrition is associated with urbanization and higher income levels—however, it is no longer confined to urban areas. Recent studies have shown no significant difference between overweight and obesity among adults in rural and urban areas in developed and developing regions (Trivedi et al. 2015; Kumari et al. 2022).

A deficiency of essential micronutrients like vitamin A, zinc, iron, folate, and vitamin B12 is widespread in developing regions with an increasing prevalence in developed areas. Anemia is one of the critically severe manifestations of hidden hunger among children, adolescents, and adults. In 2019, the WHO reported that approximately 40% of children under 5 suffer from anemia globally (see Figure 3). Prevalence is lowest in the higher-income regions of North America, Europe and Central Asia, and East Asia and the Pacific. However, South Asia and Sub-Saharan Africa are severely affected, with 55% and 60% of children being anemic (World Health Organization (via World Bank), n.d.). Zinc and vitamin A deficiency are other more prevalent micronutrient deficiencies among children.

Figure 3: Percentage of Children under Five with Anemia by Region (%)

Once considered a clinical problem localized to poor regions of the world, malnutrition is finally being realized as a social, political, and economic issue. The measurement criteria and definitions of estimating malnutrition may vary. Still, their coexistence in geographical regions, households, and individuals worldwide has pointed out systemic changes in food systems, dietary patterns, and increasing inequality in terms of the availability, accessibility, and affordability of nutritious food.

Food systems are intrinsically complex and unique to geographical and cultural settings. However, the global food system transition has made unhealthy food cheaper and easily accessible (Popkin et al. 2020). Through fiscal subsidies, several countries have expanded access to staples such as wheat, rice, corn, and their derivatives. As a result, unsubsidized or less-subsidized commodities like fruits, vegetables, and pulses have become relatively more expensive and discouraged from being consumed. (Chakrabarti et al. 2018; Gillespie et al. 2021).

Several other factors have contributed to the prevalence of malnutrition in developing areas. This includes improvements in life expectancy due to a shift in disease burden from infectious to noncommunicable diseases and rapid economic development leading to higher availability and affordability, particularly high-carbohydrate and processed products. Unplanned, highly dense urban areas have further added to the burden by discouraging physical activity.

Climate change, conflicts, and the coronavirus disease (COVID-19) pandemic have caused disruptions and the collapse of international food supply chains in many regions of the world. According to the Food and Agriculture Organization, in 2020, almost 3.1 billion people could not afford a nutritious diet, an increase of 112 million since 2019, reflecting the effects of the COVID-19 pandemic on consumer food prices (FAO et al. 2022).

While approaching the problem of malnutrition in all its forms, policy makers must understand the regional nuances and challenges. It is imperative that they acknowledge that malnutrition is not just a clinical issue but more of a socioeconomic, cultural, and political challenge. Hence, a one-size-fits-all approach may never work, especially in countries with high populations and cultural diversity.

Several studies have continuously pointed out that food quality, more than quantity, correlates with malnutrition (Pinstrup-Andersen 2007; White et al. 2017). Most nutrition policies, especially in developing regions, still focus on providing enough calories rather than meeting children’s nutritional requirements (Afridi 2010). Both food insecurity and energy-dense, high-sugar foods result in micronutrient deficiencies. In the presence of undernutrition or obesity, the risk is further exacerbated due to several physiological processes (Rah et al. 2021). A diverse diet, including high protein and micronutrient sources, is essential to ensure proper physical and cognitive growth, particularly in early childhood. Nutrient-dense food like fruit and vegetables, legumes, dairy, eggs, and seafood must be included in larger portions while providing supplementary meals through nutrition delivery centers and school feeding programs.

In terms of data availability, the lack of micronutrient-level data at the population level is a considerable barrier to understanding the gravity and pattern of the regional burden. In addition, inadequate knowledge is often a more significant determinant of malnutrition than the lack of food (Romanos-Nanclares et al. 2018). Therefore, disseminating knowledge and awareness about healthy diets is critical to educating parents and caregivers and reducing the risk in infants and young children. Policies should consider geographical and sociocultural factors with collaboration with agrifood systems stakeholders, including local government and civil society institutions, while establishing public-private partnerships.

Romanos-Nanclares, A., I. Zazpe, S. Santiago, L. Marín, A. Rico-Campà, and N. Martín-Calvo. 2018. Influence of Parental Healthy-Eating Attitudes and Nutritional Knowledge on Nutritional Adequacy and Diet Quality among Preschoolers: The SENDO Project. Nutrients 10(12), 1875.