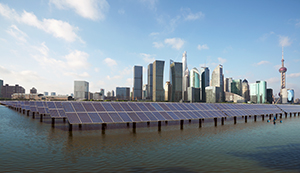 In 2015, all countries of the world agreed to adopt the 17 Sustainable Development Goals (SDGs) as a part of the 2030 Agenda for Sustainable Development. These goals came into force on 1 January 2016 and are aimed at ending poverty, protecting the planet, and attaining prosperity for all. The adoption of the goals was a unique achievement as they are applicable universally, and countries are making joint efforts to achieve them. Although the SDGs are not legally binding, countries are expected to take ownership and to voluntarily report their progress at the national level.

It was also decided to review and monitor the progress in achieving the SDGs under the aegis of a High Level Political Forum (HLPF) at the global level. The first review was undertaken in 2017, and the second meeting of the HLPF is scheduled to be held during 9–18 July 2018 on the theme of “transformation towards sustainable and resilient societies”. SDG 7, “ensure access to affordable, reliable, sustainable, and modern energy for all by 2030”, is one of the SDGs that will be reviewed along with five other goals. Forty-eight countries are expected to present national voluntary reviews where good practices, gaps, and lessons learned from the implementation of these goals will be shared. As a part of the preparatory process, the Global SDG 7 Conference was held from 21–23 February 2018 in Bangkok under the aegis of the United Nations Economic and Social Commission for Asia and the Pacific to provide inputs to the HLPF.

It is well acknowledged that clean energy is the golden thread that runs across all SDGs and is considered vital for their attainment. SDG 7 contributes to ending poverty as it aids economic activity, ensures a healthy life by reducing pollution, provides opportunities for education by provisioning lighting, enhances gender equality by freeing women from the burden of collecting firewood, contributes to the provision of clean water and sanitation, provides opportunities for productive employment, fosters industrialization, makes households and settlements safe, has a direct impact on lowering emissions and thereby prevents climate change, restores the sustainable use of terrestrial ecosystems by taking away the pressure on firewood as a source of fuel, and promotes sustainable development at all levels. SDG 7 has five targets, which aim to increase energy access and renewable energy, enhance international cooperation, expand infrastructure, and upgrade technology for providing clean energy. One of these targets is “to double the global rate of improvement in energy efficiency by 2030”.

Out of the global total primary energy supply of about 14,000 million tonnes of oil equivalent (Mtoe) in 2015, final energy consumption was only around 9,000 Mtoe. This implies that more than 35% of the total primary energy is lost in the process of energy conversion and distribution. If the actual demand of energy services and the efficiency of the appliances that convert final energy to useful energy are also taken into consideration, there is a huge potential for saving energy. On the supply side, energy-efficient conversion improves the performance of fossil fuel-fired electricity stations; on the distribution side, energy-efficiency improvements in the transmission of electricity lower losses; and on the demand side, energy-efficient equipment and appliances reduce energy demand. Energy efficiency is, therefore, rightly considered the holy grail and the cornerstone for achieving SDG 7 as it reduces energy waste across the entire energy supply chain. Less waste implies cheaper energy prices, which increase affordability for consumers and reduce supply shortages, thereby improving reliability.

The targets of SDG 7 align with the objectives of SE4ALL, proposed in 2012, and they have the common goal of “doubling the global rate of improvement in energy efficiency”, albeit now with a target date of 2030. Global Tracking Framework, which tracks the progress in achieving SDG 7, reported that global primary energy intensity was 5.49 megajoules per dollar (MJ/$) (expressed in gross domestic product [GDP] purchasing power parity [PPP] 2011 $), and showed an average improvement of 2.1% a year from 2012 to 2014. A decrease in energy intensity was observed in 15 of the top 20 energy consumers in the world, and the People’s Republic of China (PRC), Mexico, Nigeria, and the Russian Federation reported an annual reduction of 2.6% between 2012 and 2014. The global rate of decrease in energy intensity was, however, short of the 2.6% compound annual growth rate that was targeted for the period 2015–2030. To cover this shortfall, the global target has now been revised to a decrease of 2.8% a year.

Data reveal that the average primary energy intensity for Asia and the Pacific and Africa was higher than the global average, while that for Europe, North America, and Central Asia; Latin America and the Caribbean; and the Arab region was lower. The industrial sector had the highest global average energy intensity at 4.77 MJ/$, followed by the agriculture sector at 1.25 MJ/$ and the services sector at 0.62 MJ/$ (all GDP expressed in PPP 2011 $). Among the large energy consumers in Asia, Japan was the most energy efficient, with a primary energy intensity of 4.09 MJ/$, followed by India, the Republic of Korea, and the PRC, with primary energy intensities of 4.94 MJ/$, 6.63 MJ/$, and 7.43 MJ/$, respectively. While the largest improvement in energy intensity was in the passenger transport sector (-2.8%), the industrial sector (-2.2%) and the agriculture sector (-1%) also showed improvements. In most of Asia, the decrease in the annual energy intensity was lower than 2%, slightly lower than the world average. However, there is large scope for improvement in energy efficiency, especially in the transmission of electricity in the residential sector and the freight transport sector.

Energy efficiency makes a strong business case as it lowers the cost of energy for the consumer apart from lowering emissions and avoiding additional investment in energy infrastructure. But there are various market barriers, such as the high capital costs for energy-efficient equipment, fuel subsidies that hinder investment in energy efficiency, split incentives, and uncertainty in government policies. Behavioral issues include informational barriers, perceived risks, and consumer attitudes. Government policies, regulatory instruments, markets for energy efficiency certificates, fast-paced technical developments, mass production, and incentives can go a long way in promoting energy efficiency.

It is hoped that the role of energy efficiency is highlighted in the forthcoming HLPF and countries combine their efforts to overcome these barriers while learning from each other’s experiences in implementing energy efficiency measures. These efforts would go a long way to achieving SDG 7 in a timely and homogeneous manner.

Kapil Narula is a former officer of the Indian Navy and is currently a postdoctoral fellow working on energy efficiency at the University of Geneva.
View all posts by Kapil Narula →

← Piecemeal Policy Approaches to Aging Societies: Can They Be Avoided with Proper Data on Well-Being?
Next generation of quality development and investment in the new Pacific trade pact →

One Response to Energy Efficiency: The Cornerstone for Achieving SDG 7