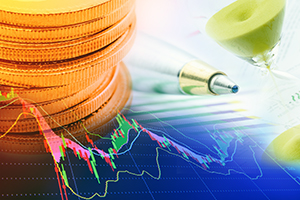 Earlier this month, the Pacific trade pact was reborn in Santiago as the 11-nation Comprehensive and Progressive Agreement for Trans-Pacific Partnership. While the headlines have been dominated by the absence of the United States and the level of trade gains each nation hopes to enjoy, let’s focus here on three less-remarked-upon sections of this revised treaty among Australia, Brunei Darussalam, Canada, Chile, Japan, Malaysia, Mexico, New Zealand, Peru, Singapore, and Viet Nam (the TPP11).

Ever since the talks for a draft multilateral agreement on investment were abandoned in the late 1990s, trade negotiators have been seeking to incorporate serious protection measures for transnational capital and foreign direct investment (FDI) into larger plurilateral arrangements. With TPP11, that has convincingly been achieved by finding common ground among developed and developing countries across three continents on shared interpretations of many vexed issues, including what constitutes expropriation or nationalization, fair and equitable treatment and effective compensation, and a general submission of investor-state claims to arbitration (except for certain types of suspended investment agreements and authorizations).

Development by investing in ESG infrastructure

Specific and detailed provisions in the chapter on development recognize the need to enhance opportunities for women and the benefits of broad-based economic growth through research and innovation, and, most importantly, maximizing the inclusion of the private sector.

The TPP11 countries accept a sustained and high-level commitment to investing in infrastructure and finding new opportunities for taking advantage of the roles of small and medium-sized enterprises (SMEs) and private companies in market-based solutions for development. Significantly, the parties have resolved to pursue environmental, socially-responsible and well-governed (ESG) investment and trade.

Size of sovereign wealth funds in the TPP11

Table 1 presents a sampling of just some of the major national pension reserve funds and sovereign wealth or heritage funds (SWFs) operating out of the developed members of TPP11 (excluding Japan). (Many big funds also voluntarily subscribe to the Santiago Generally Accepted Principles and Practices for prudent and responsible SWFs that invest mainly outside their home country). 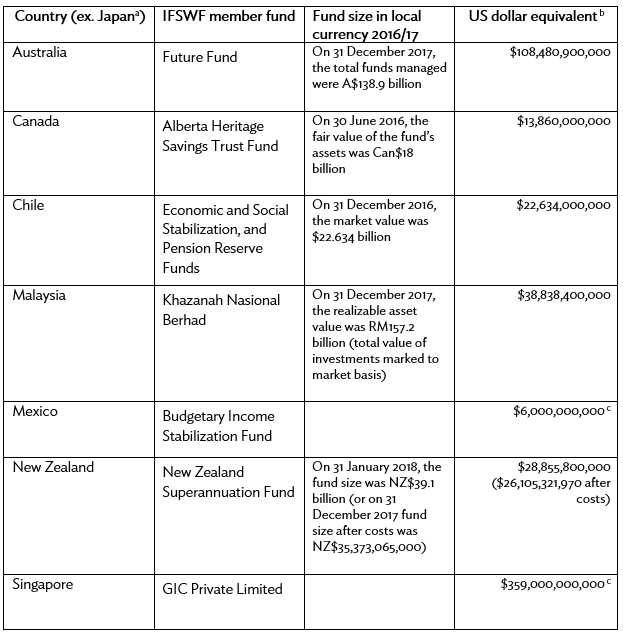 IFSWF = International Forum of Sovereign Wealth Funds.
a Japan Post Bank, Government Pension Investment Fund of Japan and similar massive national social security schemes have not been treated as SWFs by convention and practice. Norway’s Government Pension Fund-Global used to be in the IFSWF but has formally withdrawn, although it is still viewed as a member fund for some purposes and comparisons.
b Estimated using XE historical currency conversion rates (http://www.xe.com/currencytables/) accessed 19 March 2018.
c Estimated by Sovereign Wealth Fund Institute, Fund Rankings: Largest Sovereign Wealth Funds by Assets Under Management (https://www.swfinstitute.org/sovereign-wealth-fund-rankings), accessed 13 March 2018.
Sources: Latest disclosure available from each SWF’s official website and their self-assessment compliance reports on the IFSWF website, visited on 13 March 2018. Compiled by author.

Half trillion in US dollars under management by TPP11 investment funds

Together, these government-connected, special purpose investment funds account for about $580 billion under management; a sizable portion of which could potentially start to be made available for channeling into suitable ESG-friendly projects within the region, either independently or through syndication as a participant in a secured loan or a consortium of bondholders, or via a collective super-fund.

Japan’s pension fund, which is the largest in the world, also announced at the start of this year a strategy to operate a global infrastructure fund of funds. More government pension funds from Canadian provinces and Australian states are increasing their share of foreign assets held, too. And even Middle Eastern sovereign wealth funds are starting to get interested in diversifying their oil-dependent portfolios by targeted infrastructure investments to boost feasible projects in the transport and utilities sectors, with some having operations that extend to developing countries in Asia.

Cooperation to harmonize rule-making and policies

Trade agreements, be they global or regional, are notorious for the technical details that often lie hidden in letters of understanding, side instruments, or country-specific appendices that frequently water-down what appear to be generous concessions agreed in the main part of the negotiated text. TPP11 is no different in that respect, but it does hold out the prospect of greater cooperation among the parties to achieve coherence and harmonization of their policies, rules, and regulations to lessen the need for these kinds of deviations and nonconforming exceptions.

So far, no specific sectors have been earmarked for harmonization, and no definite regulations have been identified for mutual recognition. But, in the future, regulation-writing agencies will be required to conduct impact assessments, particularly on the potential effects of new rules on SMEs; adhere to core good regulatory practices, including transparency, advance notification, public engagement, and clear language; and consider compatibility with measures that other parties are taking or are planning to take.

Future parties in the Comprehensive and Progressive Agreement for Trans-Pacific Partnership?

Of course, we have some way to go until the necessary ratifications of signatories and the entry into force of the TPP11 agreement, but it is nevertheless tantalizing to consider what future possibilities could be beckoning in the sectors of high-quality development and ethical investment. And who can tell what other countries (such as, possibly, the United Kingdom) or customs territories might want to accede before then?