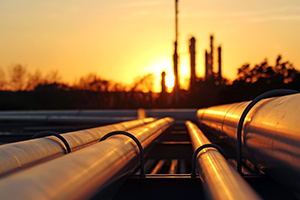 The importance of the Caspian Basin as a source of energy is increasing due to current geopolitical developments. Crude oil and natural gas are being transported from Azerbaijan, Kazakhstan, and Turkmenistan via countries with high, volatile political risk. Considering the energy transport route from the Caspian Basin to the European Union through the Russian Federation, Ukraine, Georgia, and Turkey, it can be argued that the energy security of demand is highly contingent on energy transportation. Unstable and changeable political situations in these regions as well as conflicts there can pose risks for energy exports from the Caspian region to the European Union.

In a recent study (Aydin and Azhgaliyeva 2019), we capture these risks by developing an aggregate index for measuring the security of demand. The index is a product of individual indicators, including political risks in energy-transporting countries. Energy security indicators are tools for communicating energy issues to policy makers and the public, and there is a need for measures that can capture the geopolitical situation and inform policy makers about the impact of the challenges of energy security on energy transportation in the Caspian region.

The results show that the REED index for Azerbaijan and Kazakhstan increased significantly from 2014 due to a reliance on crude oil transportation through Ukraine and Turkey. This occurred due to a sharp decrease in the World Bank’s Political Stability and Absence of Violence index for Ukraine from 2014 and in Turkey from 2015 (World Bank 2018).

The REED index for Turkmenistan is higher than for Azerbaijan and Kazakhstan due to its high dependency on imports of natural gas by one country, i.e., the PRC from 2010 and Ukraine before 2010. The greater diversity of importers of crude oil from Azerbaijan and Kazakhstan than for natural gas in Turkmenistan explains the lower risk for external demand for crude oil in Azerbaijan and Kazakhstan than for natural gas in Turkmenistan.
The results demonstrate the importance of considering the political risk in energy-transporting countries when the energy security of demand is measured for energy-exporting countries without direct access to importers, e.g., Azerbaijan, Turkmenistan, and Kazakhstan. The study developed a simple methodology and uses open access data that allows the REED index to be produced for other periods, countries and exporting fuels. This methodology can be implemented to generate indicators that can measure the security of demand for countries that do not have direct access to energy importers and depend on energy-transporting countries.

Ulviyye Aydin is an associate professor in the Department of Political Science and International Relations at Manisa Celal Bayar University, Turkey.
View all posts by Ulviyye Aydin →

← Land readjustment in Japan: Beyond the myth of Japanese consensus and harmony
E-learning to enhance capacities in Asia and the Pacific →