The necessity of developing SME databases in Asian economies

By Naoyuki Yoshino and Farhad Taghizadeh-Hesary. Posted May 12, 2015 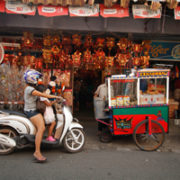 Considering the importance of small and medium-sized enterprises (SMEs) for employment and GDP and the number of such firms in Asian countries, further efforts need to be made to offer SMEs access to finance. Asian economies are often characterized as having bank-dominated financial systems and underdeveloped capital markets, and as a result, banks are the main source of financing for SMEs.
Comment