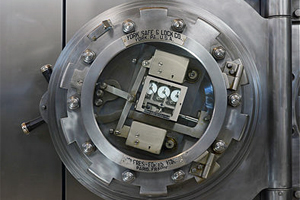 Cash is an extremely useful social contrivance. Two possible drawbacks of high-denomination cash have recently been discussed by Kenneth Rogoff (2016) in his book, The Curse of Cash, and echoed by other economists. They are the extensive use of high-denomination cash by criminals and others engaged in illicit and corrupt activities, and the role that cash plays in avoiding deeply negative nominal interest rates imposed on bank accounts. Rogoff and others call for a phasing-out of high denomination cash over a long period.

Rogoff sees benefits to restricting the supply of cash, especially high-denomination currency. Those benefits would be a reduction in crime and a looser bound on nominal policy rates falling well below zero. Is there enough evidence to endorse the proposal to restrict the provision of high-denomination cash or even eliminate it altogether?

In my companion paper, “The Case for Cash” (McAndrews 2017), I elaborate on these issues and discuss the issue of cash and negative nominal policy rates. I find that restricting the supply of high-denomination cash is not warranted. I disagree with Rogoff’s policy recommendation and believe that the $100 and $50 notes should be maintained in circulation.

First, I consider two analogies to restricting the provision of high-denomination cash and then discuss the application to cash directly. Support for the statements below can be found in my paper.

The conclusion I come to is twofold. First, society is not necessarily better off with the elimination of free needles and condoms, as HIV rates rise. Second, the distribution of those items confers benefits on people who do not use the items themselves, via the reduced risk of infection of HIV, hepatitis, and other illnesses.

In applying the analogous situations to cash, I look for what would displace the use of cash for criminals in the event that high-denomination cash were to be withdrawn from circulation. While foreign currencies; digital currencies, such as bitcoin and others; and commodities, such as jewels and precious metals, would be used in some circumstances, it is likely that a private form of debt would also be used to facilitate criminal activities. This is likely because of the historical record of how money developed. There are no anthropological records showing that cash displaced barter, overcoming a “problem” of a lack of double coincidence of wants. Instead, the overwhelming record is that cash displaced gift giving and debt obligations. If cash is removed from circulation, criminals are likely to resort to the prior method of exchange, using debt instruments to facilitate their activities.

Were cash to be eliminated in the underground economy, criminals would face the following conditions: (i) people would wish to hide their identities from the authorities, (ii) police protection would not be available, and (iii) courts could not be used to enforce contracts. Private debt claims, secret from the authorities, can substitute for cash so long as they can be enforced. Reliance on debt claims to facilitate crime would change the nature of the underground economy. What would be crucial is an organization with a comparative advantage in the enforcement of debt contracts by nonofficial means.

The mafias of the world are exactly such organizations. So the nature of crime without high-denomination cash would change to one that is much more governed by organized crime.

Were society to restrict the provision of high-denomination currency, as Rogoff recommends, we can expect that not only the amount of crime might fall, but that its nature and type would change, and for the worse. More demands would be placed on organized crime to enforce debt contracts that would be used to facilitate crime, increasing the use of threats of violence and ensnaring many innocent businesses and individuals in their nets of violence.
_____

Photo: By Alvesgaspar (Own work) [CC BY-SA 4.0], via Wikimedia Commons

← One year after the Fed liftoff: Consequences for emerging markets
Ultra-low interest rates and wandering overinvestment cycles in East Asia →