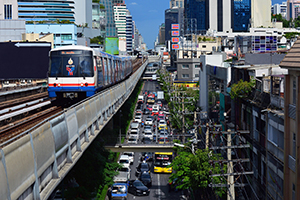 As cross-border capital flows rise relative to world gross domestic product (GDP), developing countries do not wish to miss the associated benefits. But at the same time, they are also anxious about avoiding the associated economic instability and distortions. What is the right strategy with regards to international capital flows? We can draw lessons based on the recent literature.

In neo-classical models of open economies, reducing or removing the frictions on cross-border capital flows can reduce the cost of capital for developing countries. Is there evidence supporting this channel? Using firm-level data from Chile, Forbes (2007) finds that the cost of capital became higher for smaller traded firms during the capital control period of 1991–1998.

The efficiency loss associated with capital controls goes beyond raising the cost of capital for some firms. Wei and Zhang (2007) point out that once capital controls are in place, authorities have to worry about firms mis-invoicing exports or imports to evade the controls. This will likely result in greater monitoring of cross-border transactions and increased documentation requirements for exporters and importers at customs. Wei and Zhang (2007) estimate that an increase in the restrictions on foreign exchange transactions by one standard deviation in the sample has the same negative effect on trade as an increase in tariff by 11 percentage points.

Reducing the frictions to international capital mobility can in principle help households better manage income risks. That is, if part of the household wealth takes more cross-holding of assets across national borders, domestic consumption should become less sensitive to fluctuations in domestic output. Greater risk sharing by households per se raises economic welfare. Because domestic GDP growth is more volatile in developing countries than in rich countries, the benefits of risk sharing are in principle more important for developing countries.

Unfortunately, the evidence on improved risk sharing is elusive, especially for developing countries (Bai and Zhang, 2009). That is, the sensitivity of consumption to output fluctuations does not appear to decline much even though the ratio of cross-border capital flows to GDP—a common measure of de facto exposure to financial globalization—increases.

A third potential benefit of financial globalization comes from the political economy channel. With freer capital mobility, a government’s ability to make bad choices may be more constrained. As a consequence, the economic outcomes are better than they would otherwise be. In principle, the policy discipline effect applies to developed as well as developing countries. To the extent that macroeconomic policies are unconditionally more likely to deviate from the optimum, this policy discipline effect should be more important for developing countries as well. The empirical evidence on the existence and strength of the policy discipline effect is mixed. For example, Tytell and Wei (2004) find supportive evidence that greater exposure to financial globalization helps countries to stay away from bad monetary policies (e.g., high inflation) but no comparable evidence on fiscal policies.

Factors that may reduce or reverse the benefits of financial globalization

Distortions in the domestic financial market

Distortions in the international capital market

A typical developing country often faces an aggregate borrowing constraint from the international capital market. The borrowing constraint might take the form of a fraction of the nominal value of a country’s GDP or wealth. Moreover, international capital flows can exhibit “sudden stops,” that is, a period of abundant capital from rich countries can be followed, often suddenly, by a period of capital flow reversal. A rise in the United States interest rate, for example, could trigger such a reversal.

When an individual private sector agent (firm or household) borrows from abroad, its action tightens the borrowing constraints of the other agents in the economy, especially during a time of “global capital reversal.” If the effect of one agent’s borrowing on other agents is not taken into account by the borrowing agent, there is externality in the borrowing behavior. If the aggregate borrowing constraint is more of a problem in the international capital market than in the domestic capital market, then the externality is unique or at least more severe for international borrowing by developing countries.

In this sense, the private sector may borrow too much in “good times” relative to what a benevolent social planner would. This over-borrowing becomes a problem when the value of the country’s collateral depends on prices: in the event of a global capital flow reversal or sudden stops in international capital flows, it can cause falling asset prices (a tighter borrowing constraint) and shrinking ability to obtain financing feed on each other, producing a larger loss in output than would otherwise be the case.

Since the over-borrowing problem arises because the social cost of borrowing is higher than the private cost faced by individual borrowers, a possible correction is to place restrictions on the ability of domestic firms (or households) to take on foreign debt.

Distortions in the domestic labor market

Du, Nie, and Wei (2017) propose a possible third channel for the failure of developing countries to benefit from capital account liberalization, namely labor market rigidity. Labor market rigidity could come from tense labor-capital relations or over-regulation of the local labor market and tends to make it expensive for firms to hire or fire workers.

Returns to capital in financial autarky are a function of both economy-wide productivity and labor market rigidities. When economy-wide productivity is low (which is characteristic of developing countries) and the domestic labor market is rigid, such returns are low. This means that once such a developing country switches to an open capital account, domestic savings tend to leave the country (as foreign returns to capital are higher). This capital flight reduces firm entry and reduces employment.

The discussion so far emphasizes over-borrowing and sudden reversals of capital flows as features exogenous to developing countries. One is tempted to conclude that capital flow management policies should be deployed to nudge the composition of external liabilities away from debt financing and toward attracting more inward FDI. However, the distortions in the domestic financial market or the international capital market can find their roots in the weakness of domestic public governance.

For example, to see why the composition of external liabilities varies by country, Wei (2000a, 2000b) documents that countries with more severe corruption systematically attract less FDI. Gaston and Wei (2005) show that countries with weaker public governance in the form of more opacity tend to attract less equity investment from international institutional investors (mutual funds, pension funds, and hedge funds) as well. Because corruption reduces FDI more than debt financing, Wei (2001) shows that bad public governance often results in a structure of external liabilities that is relatively heavy in external debt and relatively light in FDI, which is precisely the liability structure that Tong and Wei (2010) show was associated with a worse liquidity crunch during the global financial crisis. Using both firm-level and cross-country data, Wei and Zhou (2017) show that weaker public governance tends to simultaneously reduce the share of external equity financing in total investment and the share of long-term debt in total debt financing. This set of papers suggests that while capital controls might nudge the structure of developing countries’ external liabilities to be less heavy in debt, especially in short-term debt, and more in FDI and other forms of equity financing, more fundamental reforms to strengthen the rule of law and protect investors would do the same. More importantly, as Wei and Zhou (2017) imply, these fundamental institutional reforms would improve the capital structure of domestic firms inside these countries as well as the external liabilities, and capital controls can at most alter the external capital compositions.

Similarly, Engel and Park (2017) trace the problem of “original sin”—the inability of most developing countries to borrow in the international capital market in their own currencies—to a particular institutional problem: the inability of the governments of the borrowing countries to commit to not expropriating foreign debt holders by devaluing local currency debt. In that case, institutional reforms that improve a government’s commitment to not expropriate foreign debt holders might address the root problem more effectively.

If the sources of over-borrowing, excessive reliance on debt relative to equity financing, and excessive reliance on foreign currency borrowing are partly caused by corruption, the inability to commit, and other governance problems, then the countries that are most in need of capital controls are also the most vulnerable to seeing rent-seeking activities attached to the capital controls. This further raises the social cost of maintaining such controls. In the end, understanding the source of “undesirable” capital structure also has bearing on the desirability of capital controls. In particular, reforms that strengthen the quality of domestic public governance and rule of law would also lead to a reduction in resource misallocation in the domestic financial market. This will improve the chance for a developing country to benefit from financial globalization.

Distortions in the domestic financial system, international capital market, or domestic labor market can reduce the returns to financial globalization for developing countries. In these cases, removing or reducing restrictions on capital account transactions can be counter-productive. One could regard reforms in the domestic financial system or labor market regulations as complementary reforms that could enhance developing countries’ gains from financial globalization.