There is much discussion about the rapid expansion of capital market issuances by emerging market firms in international markets. This expansion has been driven by deepening financial globalization, which started in the 1990s, and, more recently, by low interest rates in advanced economies after the 2008–2009 global financial crisis.

In contrast to the importance ascribed to international capital markets, the role of domestic markets has been largely overlooked. In a new paper (Abraham, Cortina, and Schmukler 2019), we examine the case of East Asia and document how the use of domestic capital markets by firms in this region has grown significantly faster than that of international markets since the 1990s. As a result, domestic markets are now the main place where issuance activity takes place (Figure 1). 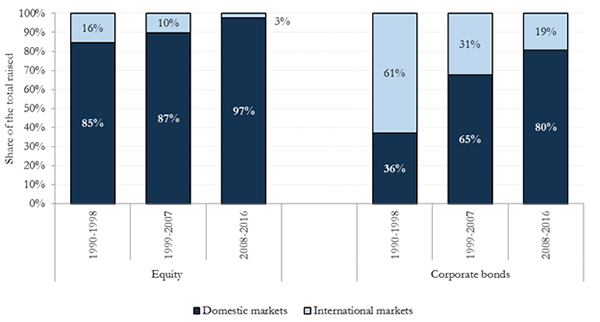 As domestic markets have developed, more firms have gained access to equity and corporate bond financing. Driven by a higher participation of firms in domestic markets, the average number of issuing firms per year in the median East Asian economy more than tripled between 1990–1998 and 2008–2016. Because domestic markets attract relatively small firms compared to international markets, the size of issuers has declined as the extensive margin has expanded. Despite being smaller, issuing firms are still relatively large corporations.

Figure 2. Issuance Activity in East Asia during Crises
(% change in the number of issuances)

Note: International issuers are those that issued international debt at least once before 2008.
Source: Abraham, Cortina, and Schmukler (2019).

Our analysis raises some relevant questions about domestic capital markets in East Asia. First, why have domestic capital markets developed so much? In part, this growth could be a result of the capital reforms implemented in response to the Asian financial crisis. However, identifying which specific policies helped jumpstart the process is not easy because East Asian economies implemented diverse reforms over an extended period (Figure 3). 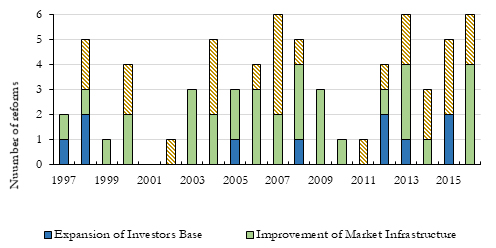 Note: The figure includes 68 reforms compiled for Indonesia, the Republic of Korea, Malaysia, the Philippines, and Viet Nam.
Source: Abraham, Cortina, and Schmukler (2019).

Second, why do these markets fail to attract many small firms? Do the reasons lie in the supply or the demand side of funds? Even when specific capital markets aimed at small and medium-sized enterprises have been established, the main users of these markets have been large firms.

Juan Jose Cortina is a Research Analyst in the Macroeconomics and Growth Team of the Development Research Group, World Bank.
View all posts by Juan J. Cortina →

← Do the socioeconomic spillovers from sewage treatment plants in developing countries justify heavy investment in them?
Cryptocurrency in emerging Asia →