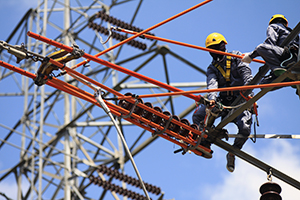 Currently, ASEAN as a whole is a net exporter of energy, with six of its 10 member states being net energy exporters. However, with depleting resources and growing energy demand, ASEAN is likely to change from being a net exporter of energy to becoming an importer. Renewable energy in ASEAN is produced mostly from solid biomass, such as firewood and wood chips used for cooking, while renewable energy generation using advanced technologies is low. For example, geothermal energy comprises 6% of generation while hydro power comprises 3% of generation in ASEAN (Liu, Sheng, and Azhgaliyeva 2019a, 2019b). Thus, international energy trade is crucial for energy security in the region.

Classical trade theory suggests that trade between two countries is closely correlated with the distance between them. Although ASEAN member countries have lower energy transportation costs due to the smaller distances between them, their trade in energy is mostly with non-ASEAN countries. The top importers of energy from ASEAN are Japan; the People’s Republic of China (PRC); Australia; the Republic of Korea; Hong Kong, China; India; Taipei,China; the United States; and Bangladesh. Meanwhile, the top exporters of energy to ASEAN are the United Arab Emirates; Saudi Arabia; the Republic of Korea; Qatar; Taipei,China; Kuwait; the PRC; India; Australia; and Oman (Liu, Sheng, and Azhgaliyeva 2019a, 2019b). Thus, distance may not explain the energy trade activities of ASEAN countries since energy trade is conducted mainly with countries from outside rather than within ASEAN.

To study the determinants of energy trade, Liu, Sheng, and Azhgaliyeva (2019a, 2019b) use the gravity model (Tinbergen 1962), a model commonly used for studying trade flows. The use of “gravity” in the model’s name is an analogy for the gravity equation in the study of physics. The model provides empirical evidence that international trade is proportional to the product of gross domestic product (GDP), geographical distance, and the presence of common borders or cultural similarities. Instead of studying the determinants of total trade in all goods, Liu, Sheng, and Azhgaliyeva (2019a, 2019b) study the determinants of energy trade. Apart from the determinants predicted by the gravity model, energy trade is shown to also be affected by the energy efficiency, renewable energy generation, and fossil fuel reserves of the trading countries.

Liu, Sheng, and Azhgaliyeva (2019a, 2019b) use annual data on bilateral trade between 440 countries over a 22-year period from 1995 to 2016 for three commonly traded energy sources—coal, natural gas, and crude oil. Overall, the sample consists of 162,943 observations. The data were collected from the United Nations Conference on Trade and Development, World Bank, International Energy Agency, and Energy International Association.

The study’s empirical estimation provides results that are mostly consistent with the existing literature (see Figure 1). Greater geographical distance between countries reduces international bilateral energy trade. This can be explained by transportation costs. In addition, energy trade is proportional to the size of the economies, measured by GDP. This means that larger economies, i.e., those with a larger GDP, have greater energy trade. The empirical results show that countries with greater energy efficiency export more energy and import less energy. Thus, energy efficiency improves the ability of countries to export energy and reduces the need to import energy.

The impact of energy efficiency on energy trade is very similar to the impact of fossil fuel reserves. For example, countries with more fossil fuel reserves export more energy and import less energy. Energy intensity across ASEAN members is shown in Figure 2. Regional integration can lead to more bilateral trade in energy products. Countries that are regionally integrated tend to trade more energy products than countries outside of a grouping. 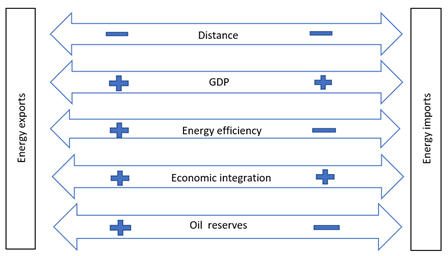 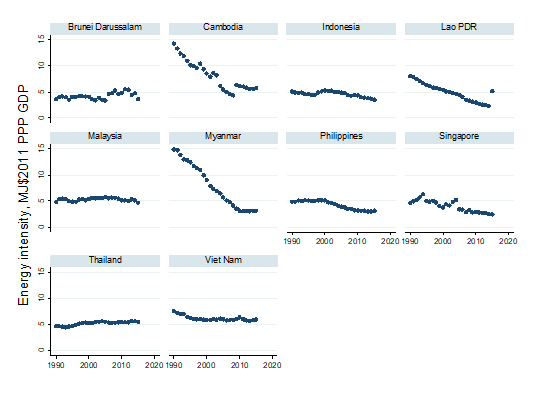 The crucial contribution of this study is that it provides empirical evidence, based on a solid methodology and a substantial sample size, that improvements in energy efficiency reduce the need to import energy and improve the ability to export energy, thus improving energy security. Also, the energy trade of ASEAN member countries benefits from regional economic integration across ASEAN.