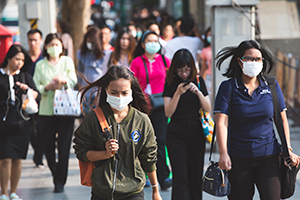 Developed countries can use advanced social security systems to protect households from the economic effects of the COVID-19 pandemic, but developing countries face a bigger challenge. They typically have a large informal sector and limited social security coverage, which hinder the delivery of assistance at short notice. Yet, developing Asia is better equipped to cushion the economic impact of the current crisis compared to the global financial crisis of 2008. Over the past decade, governments in Asia have expanded social protection, although the established social security systems for the poor remain limited. Networks and technologies are in place to identify the vulnerable and deliver assistance to them. These include citizen registration, cash transfers to bank accounts, e-benefit cards, microcredit, and others. Governments can use these mechanisms to identify and deliver assistance to the economically vulnerable during this crisis. We highlight several mechanisms.

Since the last crisis, several countries, including Bangladesh, Cambodia, Indonesia, and the Philippines, have successfully introduced conditional cash transfer programs. These are already targeting and reaching the poor and can be used during the COVID-19 crisis. For example, the program in the Philippines reaches more than 20 million people, the majority of the country’s poor. Leveraging these existing programs is an efficient way of directing additional aid to the poor in the current crisis. In many of these programs, the transfers are conditional on school attendance. Since most schools are closed, the conditionality could be temporarily lifted—and is already being lifted in some cases.

Several countries have registered their citizens electronically using a unique identification (ID) number and card. This has been made possible through advances in chip technology and bio-recognition. The best-known example is India’s Aadhaar ID number, which has resulted in the issuing of 1.2 billion cards. The ID numbers can be linked to a bank account and have allowed India to develop a “direct benefit transfer” system to provide welfare and other benefits to low-income households. At the same time, the Indian government launched a program in 2014 to encourage new bank accounts for the unbanked, which resulted in the opening of 350 million new accounts. As a result, 80% of adults in India today have a bank account, up from little more than half as recently as 2014. Business groups are advocating the use of this system to distribute benefits to cushion the impact of the current crisis on households.

E-benefit cards have been developed to provide social assistance in several countries. In 2017, Thailand introduced a Welfare Card that now provides monthly benefits to 14 million low-income people. The benefits are loaded on the card and are not linked to a bank account. Indonesia has three cards: a Smart Card for subsidies to school children, a Health Card for medical expenses, and Wealthy Family Card for social benefits for families. The latter is being used in the current crisis to expand food subsidies under the Affordable Food Program. Mongolia has a food stamp program uses e-cards in urban areas and actively communicates with beneficiaries using SMS. Meanwhile, Pakistan’s Benazir Income Support Program is a cash transfer program that is delivers assistance through debit cards.

Microcredit is another networked mechanism that assists poor households. Pumping more credit into these networks might not be a useful approach, as this would increase the level of debt and undermine the responsible borrowing and repayment practices built up over the years. Instead, it can be used to deliver support to the poor with a clear indication that these are one-off grants specifically for the period of the COVID-19 crisis.

Assistance can also be provided through mobile and branchless banking systems, which have expanded to provide banking services to previously unbanked, poorer households. E-wallets and e-payment systems may also be leveraged in this way. Thanks to advances in fintech, many countries have such mechanisms in place, and these are also being used by low-income groups. For example, the Thai government has decided to provide B5,000 per month for 3 months to support informal and independent workers who are affected by the pandemic but who are not covered by the country’s Social Security System. Funds will be disbursed through PromptPay, an e-payment system, as well as through direct bank transfers.

To reduce the spread of the virus, measures to quarantine, self-isolate, and maintain distance are being enforced, and these can have implications on how people apply for benefits. In Thailand, an initial instruction to apply for benefits either at banks or through a designated website was later modified to encourage people to use the latter option to avoid crowds.

Social distancing measures also impact how physical benefits, such as food or medicine, can be distributed, as large gatherings are no longer possible. In developing Asia in recent years, we have witnessed a rapid increase in platforms that offer transport and delivery services, such as Gojek or Grab. These technologies can be used now be used for the distribution of aid.

If aid distribution at a central site is still necessary, it will be important to avoid crowds. There may be an opportunity to control gatherings by using mobile phones, social media sites, and GPS systems. In addition, residents could be informed by phone about the distribution timing, or their ID card numbers could be used to organize pick-ups in an organized fashion.

The economic slowdown caused by the COVID-19 crisis is affecting the livelihoods of millions of people in Asia, including the poor and vulnerable. Some now face the double risk of hunger and infection. Countries have developed a powerful array of programs, networks, and technologies to provide assistance, and governments and development partners should act quickly to harness them.