Harnessing digitalization on the path to sustainable economic development in Asia 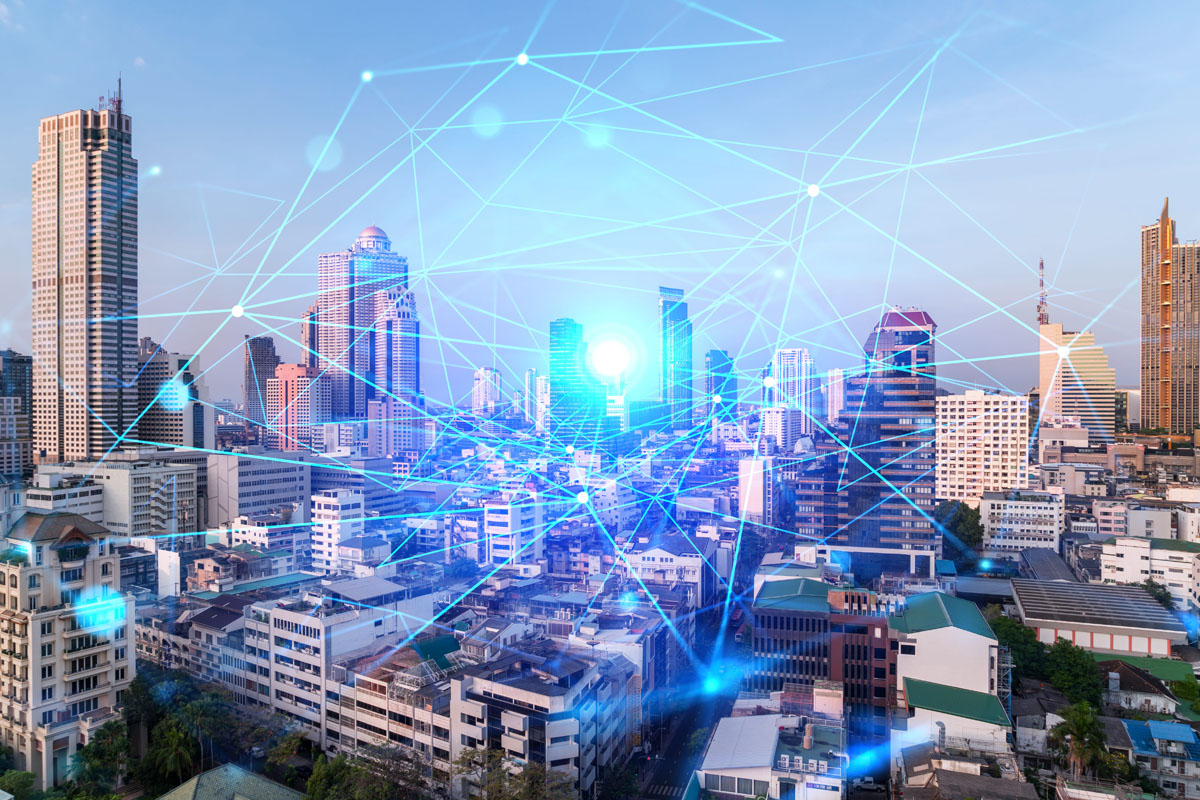 Digitalization is helping to transform economies by enhancing economy-wide competitiveness and productivity, with trade being an important channel. The use of big data and the emergence of online platforms have further bolstered the progression of the digital economy, particularly in Asia. A new coedited ADBI Press book (Beirne and Fernandez 2022), Harnessing Digitalization for Sustainable Economic Development: Insights for Asia, delves further into the main transmission channels through which digital transformation enhances the productive capacities of economies in Asia. The book also sheds light on how enhancements in digital infrastructure, digital literacy, and financial regulation can help to maximize digitalization’s benefits for the region’s economies. While spotlighting the role of digitalization on trade integration and wider macroeconomic and firm performance, insights are also provided on labor market frictions, internet accessibility issues, and cybersecurity concerns that need to be addressed to boost digitalization’s multiplier effect on the economy. The main features of the book are discussed below within the context of some recent literature on this topic.

The positive nonlinear relationship between digitalization and economic development is well-understood (International Monetary Fund 2018). Figure 1 shows that for Asian economies, while there is wide dispersion within the region, higher gross domestic product (GDP) per capita is associated with higher rates of digitalization, with marginal diminishing returns for higher levels of economic development. The ADBI book stresses that reaping the economic development gains from digitalization is dependent on a number of factors, however, with infrastructure and human capital investment comprising important fundamentals (see also Qu et al. [2017]; Czernich et al. [2011]) 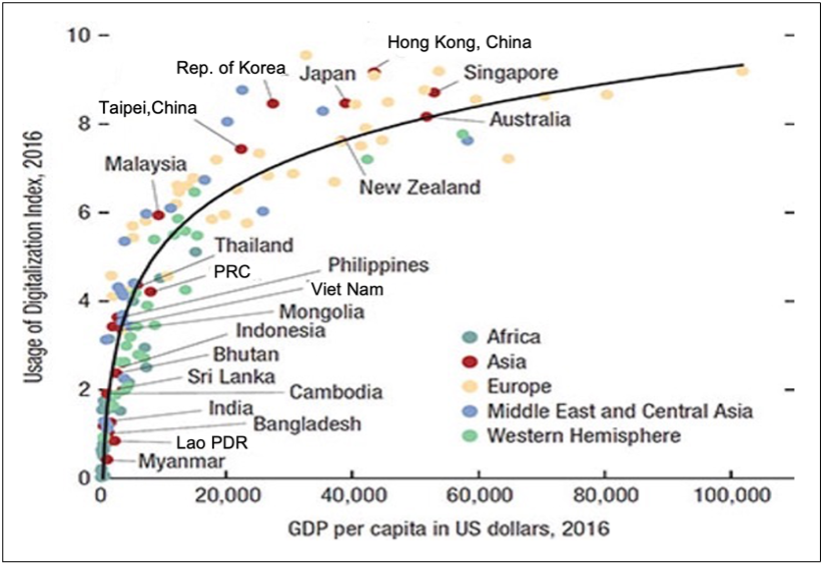 Note: The Usage of Digitalization Index ranks digitalization usage on a scale of 0–10, where 10 denotes the highest rate of digital adoption.
Source: Adapted from International Monetary Fund (2018)

The process of digital transformation in Asian economies has been ongoing for over a decade. The recent coronavirus disease (COVID-19) pandemic has led to an acceleration in the rate of digitalization and the diffusion of digital solutions into business models and practices and has become an important factor underpinning firm survival (e.g., Sonobe et al. [2021]). While recognizing that measuring the size of the digital economy is fraught with difficulty, recent work by the Asian Development Bank (ADB) estimates that the core digital economy represents somewhere in the range of 2% to 9% of GDP, while the broader digitally dependent economy’s share of GDP is estimated to range between 17% and 35% (ADB 2021a).

The adoption of digital solutions has been a key factor underpinning the post-pandemic economic recovery, and the trend for rising digital inputs in manufacturing and services is expected to continue in the years ahead. Simulation analysis carried out by ADB on the expansion of the digital sector over the period 2021–2025 indicates significant projected economic gains in Asia across key indicators due to the increasing use of digital inputs in production processes (ADB 2021b; see Figure 2). 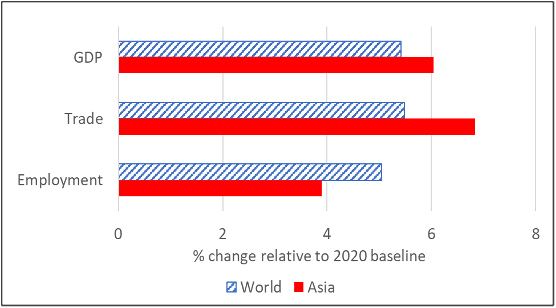 Note: The simulations are based on an assumed 20% expansion of the digital sector by 2025 globally relative to the 2020 baseline, with total factor productivity increasing by 1% per year.
Source: ADB (2021b).

Figure 2 plots the projected impact on GDP, trade, and employment globally and in Asia due to a simulated 20% expansion of the digital sector by 2025 relative to the 2020 baseline. A rise in GDP in Asia of around 6% per annum is projected as a result over the period 2021–2025, or by around $8.6 trillion on aggregate over the 5 years. About one-third of the estimated GDP gains is due to productivity enhancement and the remainder from a rise in the size of the digital sector (which subsequently increases the productivity and output of sectors that use digital inputs in their production processes). Gains are also projected for trade (around 7% per annum in Asia over the projection period, or around $5 trillion in total) and employment (around 4% per annum in Asia over the projection periods, or around 328 million jobs overall). Conditional on these projections is an investment requirement for Asia of around $910 billion over the 5-year period from 2021 to 2025. This investment would be primarily aimed at infrastructure to improve broadband access and internet coverage in the region.

The new ADBI book provides insights for Asia on the enhanced potential efficiency gains offered by digitalization and its scope for contributing to inclusive economic development while also ensuring a continued shift toward a more digital economy. In particular, the book highlights the role of digitalization in reducing the barriers to market entry for firms, enhancing financial inclusion, and providing important mechanisms for improving long-run economic growth. In addition, the book provides further empirical evidence on the impact of digitalization on regional and global economic integration, including via international capital flows and trade dynamics, by building on other recent work in this field (e.g., ESCAP [2020]). All of these are important contributory factors in helping economies make progress toward achieving the United Nations Sustainable Development Goals.

An overview of the challenges faced by policy makers in harnessing the maximum benefits of digitalization for the competitiveness of their economies is a key feature of the ADBI book. These relate to improving digital and financial education, labor market reforms, and digital infrastructure investment requirements for wider and more effective internet connectivity in Asia. While digitalization has had substantial positive effects on overall macroeconomic performance, there can be negative labor market implications and other frictions in the labor market as automation and artificial intelligence replace workers, at least in the short-to-medium term (see also Autor and Salomons [2018]). Addressing these issues would aid progression to a more inclusive digital infrastructure landscape at the regional level, narrowing the digital divide. This would also contribute to a more balanced shift to digitalization across the region. Improved digital infrastructure and connectivity for low-income households as well as greater participation in the digital economy by females are important priorities in this respect.

In addition, while Asia and the Pacific is at the forefront of e-commerce and fintech adoption, the ADBI book highlights that regulators need to ensure sufficient levels of protection for both consumers and firms, alleviating concerns about data privacy and trust in certain digital segments, notably digital payment systems.

On fintech, in particular, there are also well-documented policy challenges in addressing the risks to financial stability (e.g., Financial Stability Board [2019]; Ehrentraud et al. [2020]). A sustainable role for fintech for wider economic growth and development requires effective financial regulation and supervision to mitigate these risks, as well as the safeguarding of consumer trust concerns related to cybersecurity. Moreover, greater harmonization of regulation across the region on these issues can also stimulate enhanced levels of trade integration and overall economic activity. Central to the design of effective regulatory and supervisory measures on digitalization is a thorough understanding of its transmission channels to the real economy. Finally, international regulatory cooperation is key given the substantial cross-border implications of digital finance.

Asian Development Bank (ADB). 2021a. Capturing the Digital Economy – A Proposed Measurement Framework and its Applications. A Special Supplement to Key Indicators for Asia and the Pacific. Manila: ADB.