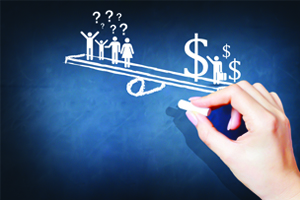 Inequality persists and so does the global concern over it. Kuznets’ views about the inverted-U relationship between inequality and development and the subsequent transformation process have been under the lenses of researchers for a long time. Kuznets’ theory proposed the inverted-U relationship through (i) a declining share of agriculture in total output and (ii) migration from the low-income agricultural sector to the high-income industrial sector (Kuznets 1955). The second-half of the 20th century marked a global slowdown in the pace of industrialization, and services became the primary destination for labor and capital flows. The role of premature deindustrialization cannot be ignored as service economies peaked even before completing the due process of industrialization. This has proven to be tumultuous for Kuznets’ theory as it challenged the typical inverted U-shaped path followed by a country as it develops, with globalization and premature industrialization making the turning point for developing countries arrive sooner compared to developed countries.

At the same time, the process of structural transformation in Asia has been unprecedented in terms of both its scale and speed. Over the last 20 years, structural transformation with a shrinking agricultural sector has created enormous potential for growth in Asia (McMillan, Rodrik and Verduzco-Gallo 2014). As shown in Figure 1, the contribution of structural change to labor productivity has been positive (about 15%) only in Asia. Asia’s labor productivity growth in 1990–2005 exceeded that of Africa by 3 percentage points per annum and that of Latin America by 2.5 percentage points per annum. The contribution of structural transformation accounted for almost 61% and 58% of these differences between Asia and Africa, and Asia and Latin America, respectively.

Figure 1: Decomposition of labor productivity growth into “within sector” and “structural change”

For regional convergence in labor productivity growth, the development of infrastructure remains the key, whereas the development of better urban management facilities remains a crucial policy task for emerging Asia as fast growth of services exacerbates income distribution through the rapid growth of services. At the same time, the heterogeneous role of structural transformation in productivity growth across Asian countries remains a concern. Likewise, the evidence is mixed on the role of globalization behind industrialization and highlights two potential areas for further research. The specific tasks of import substitution and technological progress in the process of structural transformation and new insights into the growth of domestic demand could provide useful policy frameworks for addressing the concerns over growing inequality in Asia.
_____