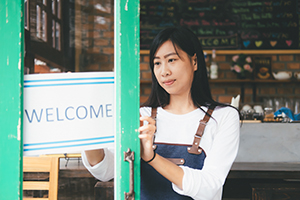 The recent global economic crisis, with its peak in 2008, resulted in a decline in global gross domestic product. It led to unstable financial markets and a lag in private sector demand (World Bank 2010). Its consequences, especially for the labor market, have been most unfortunate. In many countries, workers lost their jobs, wage earnings declined, and work hours shortened (World Bank 2011).

Women are often the hardest-hit by an economic shock (Pines, Lerner, and Schwartz 2010). In a recent study, we examine if women have responded to the recent global economic crisis by starting a business as a household-coping strategy, or “necessity” entrepreneurship. The term refers to the starting up of a business as a measure of last resort due to the lack of formal employment; it is a form of forced entrepreneurship (Allen et al. 2007). Using individual-level data from the second round of the Life in Transition Survey (2010), we evaluate the impact of the economic crisis on female entrepreneurship across 30 transition countries of Eastern Europe, Central Asia, and Turkey. Our study is motivated by the Schumpetarian (1939) process of creative destruction, which is also supported by the necessity entrepreneurship theory that inadequate labor market conditions may force individuals to become necessity entrepreneurs.

Figure 1: Effect of financial crisis on households and response to self-employment question, 2010

Source: Authors’ calculations based on of the Life in Transition Survey (2010)

Figure 1 presents the proportion of female respondents who said they wanted to become self-employed, for each of the surveyed countries, against the proportion of households that were affected by the financial crisis in each of those respective countries. The graph depicts an inverse relationship between the affected households and women who responded that they wanted to be self-employed, implying that being affected by the financial crisis subdued the desire to be self-employed. This is most likely because of the economic climate in the worst-affected countries such as Serbia, Hungary, and Bulgaria. On the other hand, we see a higher number of women with the desire for self-employment in countries such as Belarus, the Kyrgyz Republic, and Uzbekistan where the effect of the crisis was perceived to be lower.

Comparing the level of self-employment prevalent in countries in 2006 to the levels in the same countries in 2010 (as depicted in Figure 2) makes evident, to a certain degree, that the impact of the financial crisis in fact increased self-employment in the worst-affected countries. However, while this did not apply universally across the subsample of 30 countries, it is more apparent in certain countries. For example, Albania recorded the largest increase in the proportion of self-employed from 9% in 2006 to 15% in 2010, at a time when 58% of households reported being affected by the financial crisis. In contrast, Uzbekistan, which reported the lowest number of crisis-affected households (17%), also saw the largest drop in the proportion of self-employed workers across the same 4-year period, from 27% to 10%.

Figure 2: Effect of financial crisis on households and prevalence of self-employment, 2006 vs 2010

In our study, we employ a regression analysis with the individual-level data from the Life in Transition Survey (2010) (details of the model and the estimating strategy are available in our study). We examined the marginal effects of each of the explanatory variables related to the willingness of women to be self-employed and their attempts at self-employment since 2007. The results of our probit analysis indicate that women from crisis-affected households were not significantly different in their willingness to be self-employed in comparison to those women from households who were not affected by the crisis. However, our results show that women’s reluctance to be self-employed increased if a household member experienced delayed or suspended wages. Thus, women who were affected by the crisis in general had a lower preference to be self-employed.

Our analysis further captured the association between being a victim of the financial crisis, and whether the individuals have been actively trying to set up a business since 2007. Women were about 1%–2% more likely to have attempted to be self-employed if they were affected by the financial crisis—or specifically if the head of the household had lost his or her job due to the financial crisis. Given that the average rate of female entrepreneurship across the 30 countries studied was only 6%, a 1% or 2% increase in the probability of setting up an enterprise can translate to significant rates of change in the national female entrepreneurship rate.

The results indicate the presence of necessity entrepreneurship among the respondents across the transition economies. Our results indicate a positive correlation between the growth of female entrepreneurs and direct exposure to crisis. Satisfactory outcomes of robustness checks (also reported in our study) suggest a causal relationship and support the conclusion that women are generally necessity entrepreneurs. Our findings are in line with other studies (Allen et al. 2007; Nikolova, Ricka, and Simroth 2012) that point out that even though female entrepreneurs are less likely to start their own enterprise, once they do, they are no less likely to succeed than their male counterparts. This calls for affirmative actions by governments, especially in transition economies, to initiate policy directives that encourage female entrepreneurship.
_____

← “Theory of change” as a solution to the global sanitation crisis
Kuznets beyond Kuznets: Structural transformation and income distribution in the era of globalization in Asia →

One Response to Is female entrepreneurship a coping strategy during crises?