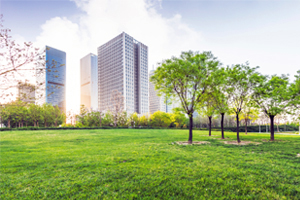 The People’s Republic of China (PRC) has reformed and opened up its economy for 4 decades. However, accompanying the country’s fast-growing gross domestic product (GDP) and trade sector, environmental degradation, such as deteriorating water quality, land deforestation, pollution, and frequent haze plagues, has attracted a great deal of attention. In 1995, Grossman and Krueger proposed the environmental Kuznets curve (EKC) hypothesis, which refers to an inverted U-shaped relationship between environmental degradation and per capita income—i.e., that environmental quality initially deteriorates but then improves as income rises. However, most empirical studies on the EKC hypothesis have presented mixed results. The theme of this article is to incorporate openness into the EKC analysis across Chinese cities over the period 2004–2013.

Trade openness can affect pollution via different channels. On the one hand, cities experiencing increased exports may become dirtier as the scale of industrial production (the scale effect) increases and the composition of industries (the composition effect) tilts towards dirtier manufacturing. On the other hand, trade openness may improve the environment if openness helps to modernize the capital stock, enabling the technology effect to outweigh the scale effect. In addition, higher income resulting from trade openness will trigger increased demand for a cleaner environment, better living conditions, and tightened environmental regulations.

In this research, we implement a state-of-the-art, continuously updated, fully modified analysis that allows for cross-sectional dependence and endogeneity. We find that the EKC holds for the whole of the PRC. Wastewater pollution increases with economic development until per capita GDP reaches a turning point of CNY31,849–CNY49,446 (in constant 2002 prices), which varies depending on the specific measure of trade openness. The turning point for sulfur dioxide occurs at a much lower per capita GDP of around CNY9,274–CNY10,103. Furthermore, the results indicate that cities featuring greater openness tend to have lower industrial wastewater emissions but higher sulfur dioxide emissions.

Given the differentiated impacts of economic growth and trade on the environment, as well as the variation in comparative advantage and the stringency of environmental regulations across Chinese cities, the aggregate measures mask regional and sectoral variation. We therefore further investigate the EKC relationships in the eastern, middle, and western regions. The results show that the EKC relationship also holds in different regions, and trade has a heterogeneous effect on the environment by region. We also calculate the city openness index by averaging the trade shares for the period 2004–2013 for each individual city and separate the cities into high and low openness. Interestingly, we find that the EKC hypothesis only holds for cities with high openness, but it is invalid for cities with low openness.

Our research findings offer important policy implications. The identification of the factors of trade that dominate the downturn in emissions will enlighten the pollution-income paths of less developed cities. Meanwhile, the promotion of openness in addition to upgrading economic structures and implementing strict environmental regulations can achieve sustainable and green growth. The heterogeneous effects of exporting and importing on the environment also suggest that trade policies should be carefully designed to take into consideration local economic and environmental conditions as well as industrial structures.
_____

Zheng Fang is a lecturer of the Business Programme, School of Business, Singapore University of Social Sciences.
View all posts by Zheng Fang →

Bihong Huang is a research fellow at the Asian Development Bank Institute, Tokyo.
View all posts by Bihong Huang →