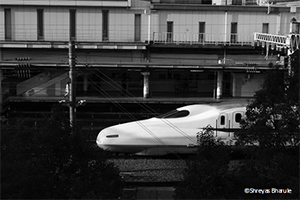 On a typical ride on the Tokaido Shinkansen traveling from Shin-Osaka to Tokyo, it does not take a childlike imagination to notice the view from the bullet train of scattered cars, small houses, and baseball fields, gradually changing as the train approaches its destination to packed apartment buildings and tall office towers. This is an important phenomenon of high-speed rail (HSR) implementation, which can be described by the terms “spillover effect” and “straw effect.”

In his presentation at the Asian Development Bank Institute on 1 June 2018, Professor Shigeru Morichi, Director of the Policy Research Center at the National Graduate Institute for Policy Studies (GRIPS), gave very meticulous insight on the components of HSR in Japan and urban development around the HSR stations. When talking about reducing the regional disparity between metropolitan areas and the peripheral hinterland, there are two common effects observed the world over. 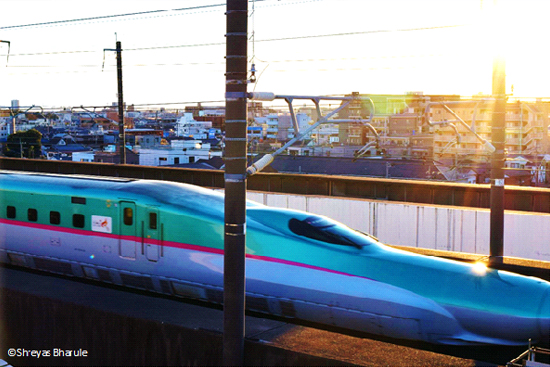 The Tohoku Shinkansen passing over the Omiya urban area.

On the one hand, HSR introduction has caused a spillover effect, wherein the peripheral hinterland has started receiving the services originally located only in the metropolitan areas to which the railway now connects seamlessly. On the contrary, a straw effect occurs when prominent services located in the peripheral hinterland relocate to the metropolitan area after becoming connected by an HSR service. Although both effects involve multiple dimensions and span multiple time periods, they work in changing the dynamics of the HSR region.

In the years immediately after the inauguration of the Tokaido Shinkansen in 1964, Tokyo—the capital and economic center of the country—caused a straw effect, with most major firms relocating their branch offices there. In 1997, upon introduction of the Hokuriku Shinkansen connecting Nagano and Tokyo, Sakudaira Station became a good example of the spillover effects caused by the proximity of an HSR station. As an intermediate stop on the route, the small town of Saku, by the following decade, had absorbed a lot of urban development around the station area. These examples highlight the two opportunities that HSR implementation offers to towns and cities: (1) improvement of transportation services, and (2) economic and urban development.

It should be emphasized that HSR generates significant impacts on the region it serves. For instance, the increased accessibility promotes investment in the region, adds to the growth of tourism, helps in expansion of the market for industries, and increases in-migration of firms and people. All these impacts add to the growth of the region and boost the local economy. Introduction of an HSR service also changes people’s travel patterns and promotes intercity competition, which are important factors in enhancing the economic development of each HSR-connected city.

In India, communities in cities along the proposed Mumbai–Ahmedabad HSR have accepted and already started making the HSR service an integral part of their routine conversation—even before it has been implemented. The proposed HSR corridor will link Mumbai, the financial hub of India, to Ahmedabad, India’s first UNESCO World Heritage City, and have 12 stations between the two terminals. Of the intermediate stations, Surat and Vadodara, both important industrial hubs for the state of Gujarat, will have one station each.

Working with the HSR implementation agency, the city officials have been trying to incorporate innovative methods to maximize the anticipated benefits from the proposed HSR service and minimize intercity competition. 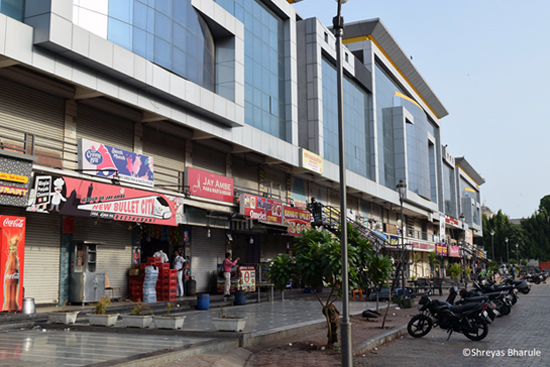 In summary, the HSR project will visibly affect its surrounding areas. The quantitative impacts cover effects related to the economy such as a change in industrial productivity, urban development, growth in tourism, and so on. At the same time, qualitative impacts have been observed such as changes in people’s lifestyles in terms of employment, education, shopping pattern, and tourism, among others. Cities and city regions becoming connected by an HSR require accurate information about these expected impacts to incorporate them into their land-use policies and urban development plans for the future. Working together, the stakeholders can shape win–win outcomes for the HSR project and the connected cities and city regions.

Note: Observations about the communities along the Mumbai–Ahmedabad HSR corridor are based on a recent visit to India.

← Malaysia’s affirmative action should be based on need
How does trade openness affect the environmental Kuznets curve? →