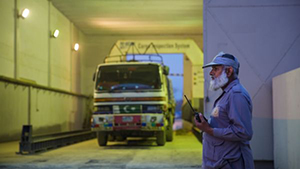 Electronic documentation in trade has made impressive recent gains in Asia and the Pacific. Up to 38% of banks in the region report progress in digitizing their operations in 2015, and more than a third of countries had partially or fully implemented electronic customs systems by the end of last year.

There’s no turning back, given the progress. But there’s a key qualifier – the progress is happening in silos. To fulfill the potential of trade digitization to address market gaps and inclusion, we need targeted investment.

The transition toward digital processing helps to overcome the three main inefficiencies of conventional trade: it is slow, costly and opaque. This is because trading involves multiple actors, all of whom are generating various documents at different stages of the process.

The costs of inefficiency are high. Trade mis-invoicing, for example, accounts for 83% of all illicit financial flows from developing countries. Globally, small and medium-sized enterprises (SMEs) only export 10% of their total sales. The figure is even lower in landlocked countries and in small island states, where trade costs are highest.

The private sector, public sector, and banks have all focused on digitizing their trade processes to address these inefficiencies.

But even as every airline, government, bank and port is digitizing, they often fail to coordinate with other nodes in the trade process. This means systems are not interoperable, and documents have to be manually keyed in or printed when they move from one step to the next.

As of 2017, air cargo is increasingly likely to use electronic documentation. 41% of all airway bills (AWBs) used by major airlines are electronic. However, when a flight lands in an unsupported airport, someone still needs to hit “print,” and from there the process reverts to traditional paper.

Figure 1: Use of electronic AWBs in Air Shipping 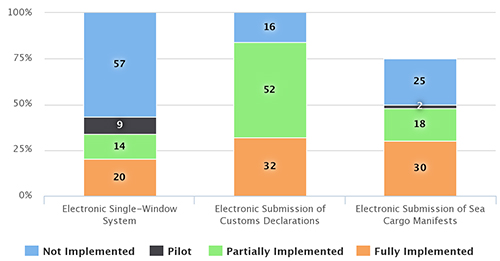 Even within governments, coordination problems are evident. The figure below illustrates 3 types of government-driven e-processes. Those that involve multiple agencies—like single-window—have made the least progress. Customs, on the other hand, is only one agency and has made rapid progress. 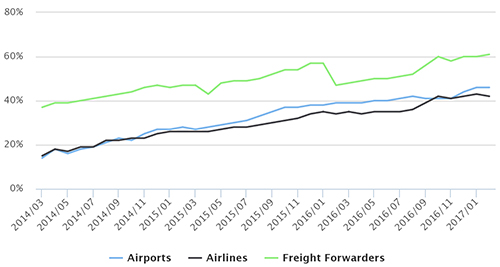 Opportunities for investment in trade digitization

The current environment of rapid progress, combined with a lack of coordination between jurisdictions and partners, on trade digitization, points to three opportunities for investment.

First, there is scope for continued support for electronic trade processing. ADB’s trade facilitation efforts have supported the digitization of government documentation. These industry-agnostic investments yield tangible improvements in processing times for all involved parties.

There is a good example in Pakistan. In 2005, the country’s customs agency implemented an automated clearance system, which resulted in a reduction of cargo processing time through the Port of Karachi from an average of just 4% being processed in under 24 hours to 96% going through in that time. The system was relaunched and expanded in 2012 to all dry ports and international airports.

Second, it’s time to invest in those areas where the private sector is moving faster than governments. Financial technology (fintech) and distributed ledger technology (like blockchain) are two areas that are progressing without a proper regulatory environment. In part, this is due to the inability of regulators to understand the technology behind the products.

Third, even as digital technology is resolving traditional trade bottlenecks, its potential to improve inclusion will not be realized without investment in deeper analytics.

Risk assessment is a fundamental need in trade – banks need to ensure against money laundering for example. So even as fintech introduces new sources of capital for SMEs, it hasn’t solved the problem of how to more effectively assess credit risk. For this, data collection and analysis is needed.

Today, the progress of digitization in trade is being driven by the objective of cost reduction, not inclusion. It is reasonable to assume that cost savings will translate to a more inclusive trade process. But for this potential to be realized in the near term, leadership and investment are needed.