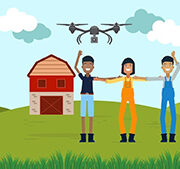 The promise of high-tech is already widely appreciated in the fields of finance and E-commerce. However, there is also a quiet revolution going on in rural and developing areas where new technologies and practices are being applied to old problems of increasing farm productivity.
Comment