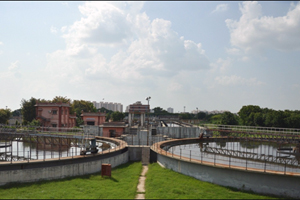 View of the STP Delawas (photo by Kislay Raja).

Decent sanitation for all is crucial for rapidly urbanizing developing countries, such as India. As large volumes of wastewater in developing countries remain untreated, the investments in treatment facilities have not kept pace with the steady increases in population and urbanization and the resulting increases in wastewater volumes. To better manage and mitigate the negative effects of this trend, developing countries need to analyze the economic, social, societal, health, and environmental benefits of investing in wastewater treatment. In order to address this situation, exemplary success stories in this domain have to be portrayed to policy makers so that they can make positive decisions to overcome this menace. The present study by Manipal University Jaipur in association with the Asian Development Bank Institute is an effort in this direction and aims to analyze the socioeconomic benefits resulting from the functioning of sewage treatment plants (STPs) in Jaipur City.

Jaipur City is expanding at a faster pace than had been anticipated, and therefore the city is facing challenges in the maintenance of its civic facilities and their expansion to meet the growing requirements. Presently, the total wastewater generation in Jaipur City is approximately 378 million liters per day (mld) (as estimated by the Rajasthan Urban Infrastructure Development Project), while the existing capacity of around eight STPs operating in the city is only 235 mld, or 62% of the requirement of the city, out of which the Delawas STP has a capacity of 125 mld from its two units of 62.5 MLD each. The Delawas STP plant is functioning successfully and is an economically viable model that works on a substantial cost-recovery mechanism using waste-to-energy practices.

Before the commissioning of the STP at Delawas, sewage was discharged directly into the Amanishah Nallah through a 180-centimeter outfall sewer at Delawas. Farmers used this untreated sewage for growing vegetables, and this caused stomach and intestinal diseases in people. The groundwater quality also deteriorated due to the percolation of untreated sewage. Thus, with the objectives of ensuring the proper management of wastewater, removing the various contaminations present in the sewage, and using the treated water beneficially, phase I of the Delawas STP was established and commissioned in 2006, and phase II was commissioned in 2010. The formation of the Rajasthan Urban Infrastructure Development Project with support from the Government of India and the Asian Development Bank led to the implementation of the STP.

Pumps drawing water to irrigate nearby farms for growing vegetables and other crops from the treated sewage water discharged into the Nallah (photo by Kislay Raja).

A study carried out by Manipal University Jaipur in 2018 revealed that the commissioning of the STP has changed the scenario in Jaipur City. The successful functioning of the Delawas STP has brought immense changes in the urban sanitation system. The overall lifestyle and living conditions of the residents of the area have significantly improved. No major abnormal health issues or water-borne diseases, such as diarrhea or infant and child mortality, have been reported among the residents in the area during the past few years. The nuisances of odor and the high potency of wastewater have been eliminated, bringing more residential complexes to the area, which has enhanced the social connectivity. Real estate and land prices after the commissioning of the STP have increased drastically, even by 100–250 times in some areas. This trend has subsequently brought huge infrastructure growth to the area. Private hospitals and private universities have been established in the vicinity, meaning more employment opportunities and better urban services. The treated wastewater is discharged into colonies for agriculture, and this has developed the beautification in terms of enhanced horticulture and revenue from farming. There has been an increase in employment opportunities and better development in the whole area. Jaipur Municipal Corporation has experienced a win–win situation, with additional revenue from selling biogas and electricity along with the elimination of the key menace of wastewater.

The Delawas STP is a success story and fully justifies the investment made to create this asset. To repeat more of such success stories, laws and policies need to be oriented and framed in such a way that municipal authorities are mandated to tackle the problem of the pollution of water bodies and pay attention to their liability to set up STPs in cities and towns to prevent this pollution. Considering the widening gap between sewage generation and treatment capacity, thoughtful action plans are needed. Full cost recovery should be targeted for the development of new STPs by introducing tariffs and costs for the reuse of treated sewage/recycled water and incorporating waste-to-energy methods. STP Delawas is an example of a self-sustaining STP. Even if that seems to be a somewhat distant target for some governments and urban local bodies, they should at least attempt to make adequate initial budget provisions for recurring costs, such as the running and maintenance of STPs.