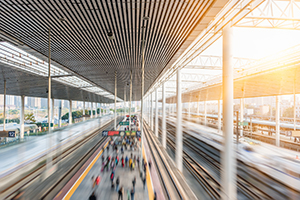 Since its inception in Japan in 1964, high-speed rail (HSR), and its impact on the economy, has received attention from policymakers worldwide. Early HSR development was more of a race to go faster, and the early success led policymakers around the world to believe in the power of HSR for catalyzing growth. For the next 4 decades, the global HSR network saw moderate growth, reaching a combined distance of around 10,000 kilometers (km) in 2005. However, until that time, a number of criticisms of HSR emerged regarding the sluggish success of the new HSR routes compared to some early predecessors. The costs were seemingly too high for the benefits that the new HSR bought in.  It is in the last decade that the world has seen rapid growth in the HSR network, with the People’s Republic of China (PRC) alone building around 30,000 km of the network. The rapid economic performance of the PRC, in tandem with its economic development, has once again fueled the debate on whether HSR is good for the socioeconomic development of a country.

This debate was deliberated on in a two-day conference on HSR Spill-Over Effects and Quality of Life (QOL), held at the Asian Development Bank Institute in Tokyo. The conference was attended by close to 75 eminent international researchers from academic institutions and government organizations, and senior officials from various HSR-operating companies. The conference focused on the modeling of the spillover and QOL effects of HSR, the impact of HSR on local and regional development, and deriving lessons from HSR-operating countries. It would be apt to summarize the discussions in the conference in one line: HSR is a necessary but not sufficient condition for the socioeconomic growth of a country. The following sections of this article will expand on this statement.

HSR is a safe, convenient, and environmentally friendly mode of transportation. In Japan, HSR operates at a maximum commercial speed of 270–320 km/hour. HSR in Japan is not only known for its speed (time-saving for passengers) but also for its remarkable safety (zero fatal accidents in 5 decades), punctuality (less than 30 seconds’ average delay per train), and convenience (1 train every 4 minutes).

Experience from the PRC has demonstrated the effects of HSR on QOL for people with regards to well-being, clothing, food, and transportation. People can afford comfortable housing in distant cities without compromising on commuting time or saving money. Such diversion to outer cities has also contributed to alleviating the problems of traffic jams and pollution in high-density urban areas.

Despite the advantages, operating a successful HSR comes with its own challenges. Although HSR may be the most preferred travel mode for the majority of HSR routes, not all HSR lines in Japan are commercially successful. However, such challenges have not deterred HSR operators from improving the quality of services. Instead, they have innovated the business model by efficiently utilizing station space. A typical HSR station in Japan is filled with shops, restaurants, and public services, creating an opportunity for HSR travelers and the public to use the space while generating revenue for the HSR operators. Stations are well-connected with urban railways, buses, and taxis, creating convenient transfers for passengers for their ongoing journeys. Typically, all large stations are surrounded by high-rise buildings, with large office and commercial spaces. Such concentration of economic activities has enabled operators to attract new trips. In this context, the discussions at the conference focused on finding answers to the following questions: Is HSR alone sufficient for creating such development opportunities? How can countries with no previous HSR experience achieve the same?

One of the fundamental challenges with HSR is its capital-intensive nature. Various methods for private sector participation have been unsuccessful because of the high risk of HSR investments. One proposed solution to counter the challenges was to use property tax revenues to improve the yield of HSR investments. Evidence discussed in the conference showcased a rise in property prices in the nearby regions after the introduction of HSR. These are spill-over effects of HSR. If some of these spill-over effects could be monetized and returned to investors, the overall yield could be improved. However, monetization of such spillover effects is not an automatic process. Evidence was also presented to show that investments in sectors such as education are essential for materializing these spillover effects. The governments local to the station area have a crucial role to play in land readjustment and land development processes (key to the property price appraisal). Moreover, practices of property price monitoring, tax collection, and revenue sharing must be institutionalized through effective stakeholder coordination.

Other evidence showed that HSR contributes to regional development. However, the interventions necessary to enable such regional development should be planned well in advance of the HSR opening. It is important is to promote the localization of the HSR, i.e., carefully assimilating the HSR in the regional master plan and taking measures to integrate the unique characteristic of each region with that of the HSR. For example, the data presented for the case of Japan suggests that the mere connection to HSR did not lead to a rise in local economic activities (tourism or the number of businesses, etc.), but only those regions that developed unique strategies using HSR as a tool benefitted. In Japan, a common practice among local governments is to develop tourist packages in collaboration with HSR operators to promote local tourism. In the absence of these unique characteristics, chances are that because of the HSR, economic activities might even move away from the region. Hence, efficient coordination between the national and local governments, local businesses, and the HSR-operating companies is necessary for realizing the abovementioned benefits.

Finally, the efficiency of HSR operation is dependent not only on its effective operation but also on the quality of each of the previous steps, such as design, materials, construction, etc. In this context, the need for robust capacity building and training efforts for managers, engineers, and the workforce, alike, were deemed necessary. Moreover, it was stressed that the objectives of training programs should not only be limited to skill development but also the development of the attitude that “quality is everyone’s responsibility”.

In such a way, only when the recipient countries have taken sufficient measures to localize HSR as much as possible, the wider economic benefits, which can last for decades, can be realized.