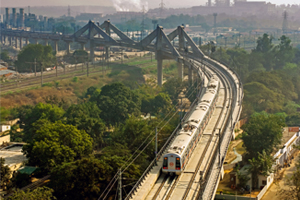 In India, the project to build the country’s first 500-kilometer high-speed railway (HSR) from Mumbai to Ahmedabad is underway. For comparison, all top 10 economies in the world except the United States have constructed several HSR lines in the past 30 years. The People’s Republic of China (PRC) alone has built nearly 28,000 kilometers of HSR in the past 20 years. Nevertheless, opinion makers in India are expressing contradicting views, questioning whether it is suitable for the country to develop expensive infrastructure such as HSR.

At the 15th World Conference on Transport Research in Mumbai in May 2019, the special session organized by the Asian Development Bank Institute titled “Need for HSR and Importance of Dedicated Track towards Safe, Available and Reliable Operations” brought together practitioners, academics, and policy makers to discuss the suitability of HSR development in India. In particular, Dr. Hiroyuki Takeshita from Chubu University, Japan, presented original research on developing key socioeconomic indicators for introducing HSR in relation to a country’s economic development stage.

Before delving into the suitability of HSR in India, its benefits should be clear. India’s first HSR is based on the shinkansen or Japanese bullet train system. The key characteristic of the shinkansen is its exclusive grade-separated tracks. It is this exclusive track system that enables high-capacity utilization to be achieved while maintaining high service reliability and high safety performance. The train between Tokyo and Osaka runs every 4 minutes. Despite this high frequency, the average delay per train is well below 1 minute. Moreover, the shinkansen has maintained a record of zero passenger fatalities since its opening in 1964.

Given the current status of transport safety and reliability in India, an efficient system such as HSR could immediately help provide many passengers with safe, reliable, and comfortable train journeys. Such efficiencies through HSR ultimately create long-term spillover effects for a country and the regions served by HSR. Over the past year, ADBI has worked extensively on developing evidence-based policy recommendations focusing on the long-term impacts of HSR investment. The conclusion is clear: HSR is a necessary ingredient for the socioeconomic growth of a country.

The ongoing debate in India is not new. Japanese policy makers had a similar debate before HSR was first introduced. Over the years, Japanese HSR has faced public criticism on a number of occasions, but its success is cemented in the firm commitment of all stakeholders to continuously improve the whole system. When starting a new project, it is important to match the HSR system to the socioeconomic conditions of a country. Comparing India’s position on certain socioeconomic indicators with that of countries that have introduced HSR gives a reasonable estimate on whether it is suitable to introduce HSR in India.

Dr. Takeshita’s study conceptualizes two types of criteria. The first set of criteria focuses on a country or region to evaluate whether it has the aptitude for HSR introduction. The related specific measures are gross domestic product (GDP) per capita and population density. The second set encompasses corridor-level criteria, where indicators such as railway passenger volume and corridor distance are taken into consideration to identify suitable HSR corridors.

First, a look at a comparison of GDP per capita (measured in purchasing power parity or PPP terms) in the year when HSR construction began. In Japan, GDP per capita was $4,700 in 1959. In many European countries, which introduced HSR after that, it was above $14,000 in the starting years of their HSR construction. In the PRC, the figure was $6,200. Over the past decade, the PRC has rapidly developed its HSR network to now cover more than 30,000 kilometers. The collective experience from abroad suggests that GDP per capita of more than $5,000 is suitable for HSR introduction. India, as one of the fastest-growing economies in the world, reached that mark in 2015. As of 2017, GDP per capita in PPP terms is more than $6,000, signifying that India meets the criteria of HSR introduction based on the GDP indicator.

However, GDP per capita alone cannot be an indicator for HSR introduction. The overall demand for HSR is also a function of population density in the HSR corridor. The figure below shows India’s comparative position when looking at its current state of GDP per capita and population density along a corridor relative to that of the economy. Each economy is plotted according to the figures from the year in which the HSR construction commenced. The red dotted line represents the best-fit line—i.e., any figure near the line demonstrates suitability for HSR construction. It is evident that the socioeconomic conditions along the Mumbai–Ahmedabad corridor in India in 2017 make it suitable for HSR construction, according to its location just on the dotted line.

In addition, a corridor-level analysis indicates that the daily railway passenger volume between the terminal stations at the time of HSR construction is another important criterion. Reviewing the experience of Europe, Japan, and the Republic of Korea, 5,000 passengers per day appears to be average. Again from the experience overseas in terms of intermodal competition with air transport, HSR is competitive against airplanes for distances less than 1,000 kilometers. These criteria, when applied to the Indian context, reveal that many of the proposed seven routes in India are indeed suitable for HSR construction.

In conclusion, the suitability of HSR construction in India is not a question in our view. We have looked at a range of socioeconomic indicators for countries with successful HSR systems. Comparing these with the current socioeconomic situation in India makes it clear that the economy is mature enough for HSR introduction. India’s GDP per capita along the proposed Mumbai–Ahmedabad corridor already surpasses that of the Tokyo–Osaka corridor in Japan and many others in the PRC. The population density is also comparable to the Osaka–Fukuoka corridor, another HSR model case in Japan.

The success of the upcoming Indian HSR relies on the collaborative efforts of all the stakeholders. Working together, they can ensure that the HSR project delivers on its promises of long-term socioeconomic growth for India.

← Expanding trade opportunities for SMEs in Asia and the Pacific
What explains the growing global demand for cash? →