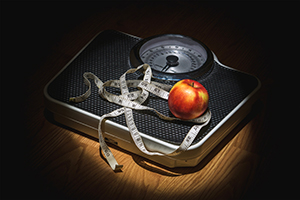 Overweight and obesity are on the rise in Indonesia. The results of the Basic Health Survey, a national, community-based survey that measures body mass index (BMI), for 2007, 2010, and 2013 show the rising prevalence of overweight and obesity in Indonesia. The prevalence among males aged 18 or older was 13.9% in 2007, 14.8% in 2010, and 19.7% in 2013. For females aged 18 years or over, the prevalence was 13.9% in 2007, 15.5% in 2010, and 32.9% in 2013. Thus, the increase in prevalence was higher among females than males. Several combining factors increase overweight and obesity. These include the consumption of energy-dense food, the intensive advertisement of unhealthy food, and the consumption of unhealthy school meals.

The estimated total number of cases of 12 diseases attributed to overweight and obesity in 2015 was around 1,997,385, and the total number of deaths was 102,792. The total productive years lost in Indonesia due to morbidity, disability, and premature mortality from high-BMI-related diseases in 2016 was 5,004,851 daily-adjusted life years. With a gross domestic product (GDP) per capita in 2016 (World Economic Outlook, October 2017) of $5,660, Indonesia’s total indirect costs (loss of productivity or DALYs Loss) due to overweight and obesity totaled around $28.3 billion, equal to around Rp368.25 trillion.

The estimated medical expenditure caused by obesity was around $116 million. These costs include hospital costs (in-patient services) based on the Standard Tariff of the National Health Insurance in Class B Hospitals (Region 1) and out-patient services in primary care and secondary care facilities.

In 2016, the total estimated macroeconomic loss due to overweight and obesity was around $28.4 billion (Rp369.70 trillion). This figure includes the total medical expenditure for in-patient and out-patient services as well as the total indirect costs (loss of productivity/DALYs Loss) of around $28.3 billion (Rp368.25 trillion).

Tracking the risk factors to health with precision and disaggregation is a key national health priority for curbing the major obesity epidemic. The prioritization of interventions should be based on their potential impact, cost-effectiveness, and feasibility. There is an urgent need to focus on the implementation of multi-component “best-practice” interventions to reduce the prevalence of overweight and obesity and the attributable burden. The suggested channels of intervention include, among others, active transport (walking or cycling) to improve physical activity; the disclosure of calorie and other nutritional content; consuming only healthy meals, reducing high calorie food and drinks, and providing food labeling to educate consumers on the content of food; media restrictions on high calorie food advertising; parental education; portion controls for food, the price promotion of healthy foods, and public health campaigns to promote healthy eating, improve physical activity, and introduce healthy nutrition in school curricula; applying subsidies, taxes, and price instruments on food and beverages; and improving weight management programs and counseling.

To achieve success, personal goals and commitment have important roles. Urgent country leadership is required to effectively intervene against the major determinants, such as excessive caloric intake, physical inactivity, and the active promotion of food consumption by industry.

Soewarta Kosen is a health policy researcher and a member of the Scientific Research Commission, Indonesia.
View all posts by Soewarta Kosen →

← Globalization and the environment in India
Managing financial globalization: A guide for developing countries →