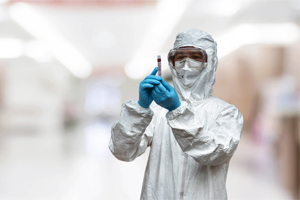 The number of COVID-19 cases in many Asian developing countries is surprisingly low, but this may simply reflect inadequate levels of testing. The high correlation between rates of testing and per capita GDP strongly suggests that lower-income countries face a number of barriers to carrying out adequate testing. This raises the risk of rapid increases in infection rates in the future and points to the need for support for additional testing, as well as for increases in medical spending and general fiscal measures.

After the initial outbreak of the COVID-19 virus in the People’s Republic of China (PRC) and its initial spread to the Republic of Korea, Singapore, and Hong Kong, China, attention has turned to the further spread of the disease in Europe and the United States. The prevalence of the virus in Asian emerging economies has been surprisingly subdued on the whole, so far. However, it is unclear whether this fortunate development is real, or simply a function of a lack of adequate testing. Since infection by the COVID-19 virus can only be detected by a specialized test kit, this raises the suspicion that the scarcity and cost of such kits may lead to a substantial undercounting of the number of cases in developing economies. This has implications for the size of the expected impacts on the economy and the amount of financial support that may be needed to offset those impacts.

For example, the Asian Development Bank’s latest Asian Development Outlook estimates that the negative impact of the COVID-19 pandemic on developing Asian economies, excluding the PRC, will range from 1.0–2.2 percentage points of GDP (ADB 2020). However, this reflects the assumption that the negative impacts will mainly come from external shocks, such as declines in tourism and the indirect effects of declines in consumption and investment in those economies already experiencing a large number of cases.1 Clearly, the impacts will be much larger if the infections take hold in developing Asian economies, leading to lockdowns of varying degrees and resulting in declines in consumption, investment, and employment.

As of 13 April, the number of cases has risen sharply in several developing Asian economies, including India (9,205), Indonesia (4,241), Malaysia (4,638), Pakistan (5,230), the Philippines (4,648), and Thailand (2,521). However, these numbers are still quite small relative to the overall populations of these economies, and far less than the numbers seen in some advanced economies. Figure 1 shows that there is a strongly positive relationship (correlation of 0.64) between the number of reported cases per million population and per capita GDP in purchasing-power-parity (PPP) terms. Armenia is an outlier on the high side, while Macau, China and Taipei,China are outliers on the low side, but otherwise the relationship is relatively close. There are two possible interpretations—either people in lower-income economies have higher immunity, or those economies have less testing.

Figure 1: COVID-19 cases per million population and per capita GDP in Asia 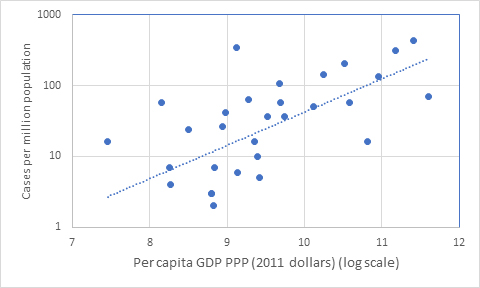 But this may simply reflect low rates of testing

The evidence strongly supports the latter hypothesis. Figure 2 shows that there is an even stronger correlation between the number of tests per million population and per capita GDP (0.72). The much lower rates of testing in lower-income countries imply that the number of cases is being substantially undercounted. One of the key issues for the monitoring and control of the pandemic is the extent to which testing is capturing those who have the virus but do not exhibit symptoms. Economies with aggressive testing programs, such as the Republic of Korea, Singapore, and Hong Kong, China, can identify such persons, but those with much weaker testing programs cannot. This further supports the view that the number of infected persons is being undercounted, which raises the risk of future rapid increases in infection.

Figure 2: COVID-19 tests per million population and per capita GDP in Asia 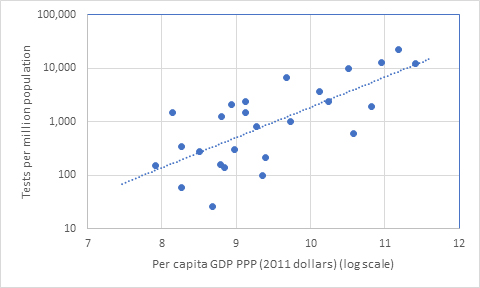 A number of factors may inhibit the ability of lower-income countries to carry out adequate testing. First, simply obtaining testing kits may be difficult due to their cost and competition with advanced countries for limited supplies. Even if testing kits reach a country, the capacity to use them may be limited due to inadequacies in the health care system, a lack of laboratory facilities, or a relatively high share of the rural population, which is more difficult to reach. Country-level strategies may focus on testing only those with symptoms, rather than trying to sample the whole population.

This points to the urgent need for multilateral banks and other development agencies to provide support for: (i) additional testing in lower-income countries; (ii) needed medical expenditures that are likely to arise from a rapid increase in COVID-19 cases (such as for constructing emergency health care facilities); and (iii) fiscal measures needed to tide economies over during the period of sharply falling demand. Multilateral institutions could also be a focal point for technology transfer related to information and telecommunication technology that could help trace the movement of infected cases.
_____

1 According to ADB (2020), this includes Australia, Brazil, Canada, the European Union, Japan, Norway, Switzerland, Turkey, the United Kingdom, and the United States. These countries were selected on the criteria of having more than 2,000 reported cases as of 27 March (except Japan).

Trinh Q. Long is a project consultant at the Asian Development Bank Institute.
View all posts by Trinh Q. Long →

← Global stimulus to fight the COVID-19 pandemic
How should ASEAN and ASEAN+3 respond to the COVID-19 crisis? →