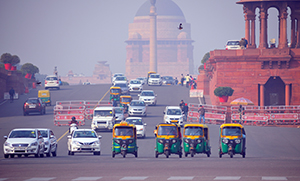 India embarked on a path of liberal economic reform in the 1990s after years of nurturing an intensively regulated and controlled economic environment that was loosened slightly in the mid-1980s. The most important and critical segments of this reform were trade and foreign investment. India has felt the impact of globalization through increased prosperity, partly triggered by increasing trade volumes, investment, and growth. The theme of this article is to make readers aware of the impact of international trade and foreign direct investment (FDI) on climate change with special reference to the Indian economy.

Scholarly work on trade, FDI, and the environment in India with rich theoretical insight and solid empirical evidence is scarce. However, there is a good amount of work on general environmental issues. Our hypothesis is that trade liberalization has not directly or substantially affected carbon dioxide (CO2) emissions. However, it has probably had greater effects through its impact on gross domestic product (GDP). In other words, we impress upon readers that the direct impact of trade and FDI on environmental conditions is less of an issue compared to the indirect effects through the positive impact on GDP growth and resultant prosperity. We also emphasize that enforcing regulations is a complex task given corruption, informal markets, and the inability of citizens to cooperate and form effective lobbies.

Preliminary calculations using data from the World Bank show that GDP has a direct, proportional relationship with the extent of CO2 emissions in India, and the relationship is even stronger after the introduction of the liberalization policy in the 1990s. However, trade seems to have an inversely proportional relationship, consistent with the view that Indian imports are mostly manufactured items that may involve polluting production processes and are currently being produced outside India.

We believe more specific research is needed to assess the overall environmental impact of patterns of production and consumption. Recent scientific analysis focuses on better scientific measures of the damage and impact of climate change and its effect on inequality. Clearly, warmer regions around the globe, including India and many developing Asian countries, will be affected more than their northern counterparts due to global warming. In fact, recent estimates show that climate change has increased inequality in the United States between the north and the south. Patterns of production are generally induced by the conditions of global trade and investment and by physical infrastructural support and local resources. India and the People’s Republic of China, the two largest countries in Asia, have very different GDP compositions. This poses the question of whether excessive industrialization coupled with the usual transboundary and climate concerns make the People’s Republic of China more vulnerable than India, which thrives on service sector growth and in turn benefits from the low pollution content of growth. This also calls for serious exploration of green accounting and the preparation of databases with better environmental indicators.

In future, it will be worthwhile to explore the effect of liberalization on other climatic aspects, such as water pollution and land salinity, with the help of large scientific databases. But the fact remains that only through trade can countries replace the local production of pollution intensive goods with imports and reduce CO2 emissions. Countries that can replace the production of pollution intensive goods by imports will reduce CO2 emissions on this count. The growth effect, however, will go the other way. Countries with different trade patterns may suffer on both counts. India is possibly a mixed case and more detailed analysis is needed to examine the hypothesis.

Sugata Marjit is Reserve Bank of India Professor of Industrial Economics at the Centre for Studies in Social Sciences in Calcutta, India.
View all posts by Sugata Marjit →

← What can countries in Asia learn from the Republic of Korea and Malaysia about sanitation and its economic impacts?
The Economic Burden of Overweight and Obesity Reaches 3% of GDP in Indonesia →