Impact of climate change on agriculture

Agriculture is extremely vulnerable to climate change due to its heavy reliance on precipitation and natural temperatures. Long-term changes in climate patterns can shift cropping seasons, affect the suitability of crop cultivation zones, and also increase the incidence of crop and livestock diseases and crop pests, jeopardizing yields, the storage of harvests, and, overall, the value chains of food markets. In India, global warming already reduced the wheat yield by almost 5% between 1981 and 2009 (Gupta et al. 2017). In Pakistan, between 1980 and 2014, spring maize growing periods shifted by about 5 days per decade, while the sowing of autumn maize was delayed by 3 days per decade, severely affecting yields (Abbas et al. 2017). Despite adaptive changes in crop management practices, negative effects of both season-long and terminal heat stress have been observed in the rice-wheat systems of South Asia (Arshad et al. 2017), which have ultimately affected the livelihoods of millions of farmers in the region, particularly those with a low adaptive capacity.

Climate change is highly likely to increase the occurrence and intensity of crop pests and diseases across the globe. With rising temperatures, crop pests and diseases are projected to expand to higher latitudes (Rosenzweig et al. 2001; Grünig et al. 2020). Global yield losses of three staple grains (i.e., rice, wheat, and maize) due to insect pests are expected to increase by 10%–25% per degree of global mean surface warming and will become more acute in temperate regions (Deutsch et al. 2018). 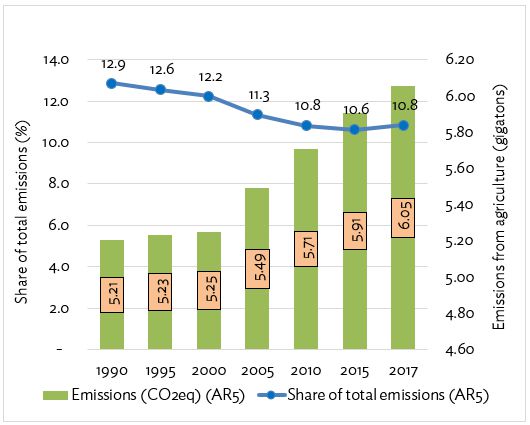 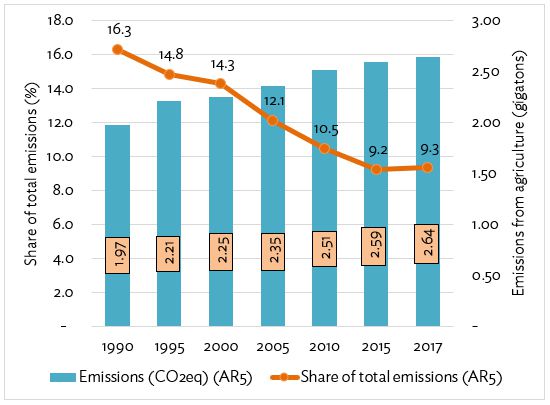 There are several other CSA practices, such as laser land leveling, climate-smart livestock farming, site-specific nutrient management (SSNM), and the use of climate-stress tolerant varieties, that can contribute to reducing the climate challenges in agriculture. However, the benefits of CSA practices are yet to be realized on a full scale as many smallholder farmers, primarily in the Global South, face several constraints to adopting such practices. Limited knowledge of CSA practices, lacking or sparse rental markets for the machinery and equipment required for adopting these practices, and the low economic capacity of smallholders for investing in these practices are among the major constraints. As the large-scale adoption of CSA contributes to the global public good through the reduction of GHG emissions from agriculture and helps achieve the targets of the Paris Agreement and the Sustainable Development Goals, global coordination and cooperation for scaling up CSA is crucial for effective climate action in agriculture. One possible starting point is the dissemination of fertilizer management or SSNM in agriculture.  Given that fertilizer markets and value chains are active across the globe, using this network for disseminating SSNM methods in agriculture can help reduce a significant amount of nitrous oxide emissions, which are a major source of anthropogenic GHG emissions as Aryal et al. (2021) and Sutton et al. (2013) attest. As smallholder farmers in developing countries have limited resilience capacity, the international society and national governments should consider using multiple networks for disseminating knowledge on SSNM, enhancing coordination between the public and private sectors to provide training to farmers on CSA, and investing in the scaling up CSA to address the climate change problem in agriculture.
_____

← Social infrastructure to drive sustainable development in Asia beyond the pandemic
Which financing sources matter for private investment in renewable energy in Asia? →