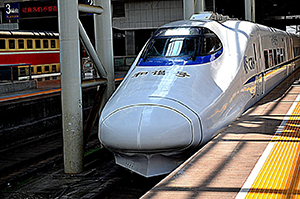 International capacity cooperation (国际产能合作 guoji channeng hezuo) was a 2014 addition to the “Go Global” policy suite that the People’s Republic of China’s (PRC) central bureaucracy expanded throughout 2016. It is the result of seeking a way forward from “new normal” low industrial growth rates and is a novel solution to the industrial capacity utilization problems the PRC has suffered since the 2008–2009 spending stimulus flooded into traditional industries. Steel, cement, aluminum, paper, glass, and everything from pork production to robots are in 2017 mired in cyclical overcapacity.

The first major capacity cooperation plan was issued to lower levels of government in May 2015 through the State Council’s Guiding Opinions on the Promotion of International Capacity Cooperation and Equipment Manufacturing, aiming to build on the PRC’s existing technological complementarities and industrial base to offshore sophisticated equipment plants. The document outlined 12 key sectors for cooperation: steel, nonferrous metals, construction materials, railways, electricity, chemicals, textiles, automotive, information and communications technology, engineering machinery, and aerospace and marine engineering. Fifteen months later, according to official Ministry of Commerce statistics, non-financial overseas direct investment stood at $130 billion for the first 3 quarters of 2016, with outward investment in the equipment manufacturing sector recording a 350% year-on-year increase.

For example, Jiangsu is paired directly with the China Development Bank and matched with Indonesia, Cambodia, Ethiopia, and the Russian Federation to offshore industrial clusters in engineering machinery, rail transportation, new energy, shipbuilding, and marine engineering. Meanwhile, Gansu has been instructed to draw funds from the China-Africa Development Fund and to pair with Iran, Zimbabwe, Ghana, Indonesia, and Thailand to offshore production chains in mineral resources, textiles, non-ferrous metals, traditional energy, and photovoltaic energy.

Considering the policy banking infrastructure, and the geographies and industrial sectors targeted by central and provincial government policy, it is difficult to assert that state-owned enterprises are making firm-level decisions in their non-financial outward direct investment.

International capacity cooperation is the PRC’s outward direct investment strategy. It is essentially a state-capital strategy designed to allow capital export and consumer goods imports without reciprocal opening of the PRC’s capital and consumer markets to foreign competition. However, it is presented in the form of capital investment and technology transfer opportunities to middle- and low-income developing countries.

Extending the lifespan for reform in the PRC’s industrial economy by offshoring production from industrial-policy-protected provinces into the global system is a novel solution to the country’s industrial slowdown. However, the financial ramifications of continuing to avoid standard accounting and competition principles mean the bitter pill is yet to be swallowed.

But the policy of international capacity cooperation is not a sinecure for the PRC’s industrial investment architecture. It extends the lifespan of the country’s Keynesian project-system model of investment-driven industrial policy, but does not transform the PRC’s domestic productive capacity or the state finance system upon which industrial production is dependent.

The underlying financial structure of the PRC’s export of excess industrial capacity to strategic partners in Africa, Eurasia, and South America is essentially uncharted waters. However, as the PRC struggles to audit its own local government debt, there could be serious financial risks present in the export of industrial capacity.

Tristan Kenderdine is Research Director at Future Risk and a PhD Candidate in political science and international relations at the Australian National University Crawford School of Public Policy.
View all posts by Tristan Kenderdine →