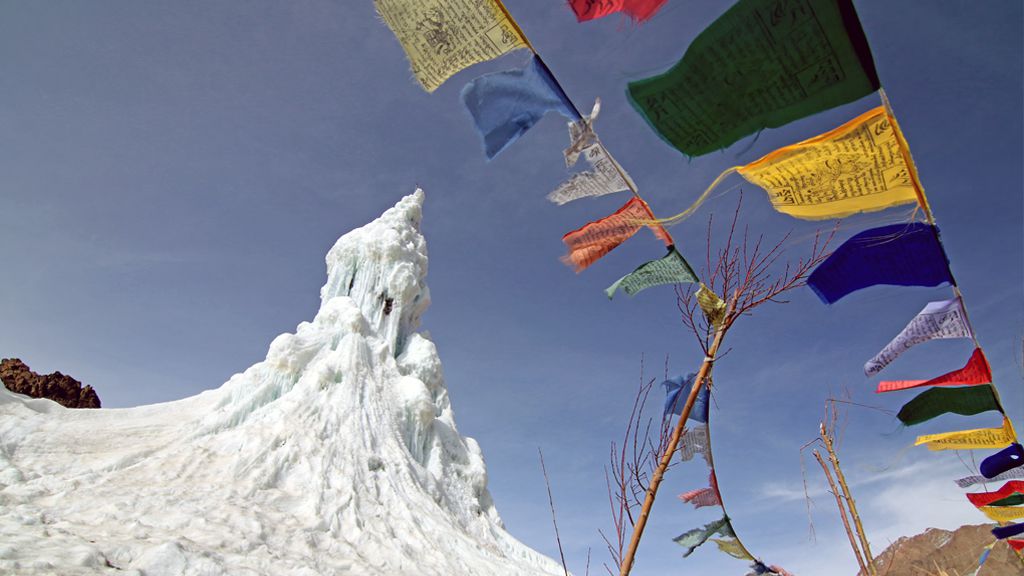 Global climate change caused by human activities will continue to be catastrophic for humanity. In particular, climate change is having serious impacts on the world’s water systems (United Nations 2020), and changes in these systems can have an enormous impact on people’s lives. This is because water plays a critical role in the very existence of all forms of life on earth as the foundation of human well-being and prosperity (Asian Development Bank 2020) and a source of life and livelihoods. For example, without water, farmers could not grow crops or raise animals. In Asia, most of the climate change risks come down to water.

First, climate change is altering rainfall patterns in Asia, both in terms of the amount of rainfall and its timing. Climate models indicate that rising temperatures will increase heavy rainfall during the rainy seasons (Allan and Soden 2008) and extend the dry durations during dry seasons (Naumann et al. 2018).  These changes will, in turn, shift seasonal water availability and increase floods and droughts. Figure 1 shows that the number of flood and drought events in Asia is on an upward trend. The total number of flood events increased from 303 events during 1970–1980 to 1,541 events during 2011–2020. During the same periods, the total number of drought events increased from 85 to 152. These floods and droughts can endanger human lives, damage homes and public infrastructure, destroy crops, and harm the economy.

Figure 1: Number of Flood and Drought Events in Asia 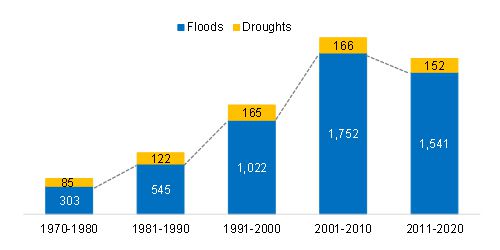 Heavier rainstorms will also increase surface runoff, the rainwater that flows across the surface of the land. Runoff is a major source of water pollution because as the rainwater moves along a surface, it picks up litter, chemicals, fertilizers, and other toxic substances, flushing them into nearby rivers, streams, and ponds. This contamination can be detrimental to human health and the aquatic ecosystem and make it more expensive to clean water to drinking standards, thereby making it more challenging for people to access safe drinking water, sanitation, and hygiene.

Second, glaciers are receding because global warming is causing a reduction in snow and ice cover. Glaciers are vital to water resources because as the winter snowpack melts, it slowly adds fresh water to rivers and streams. As the atmospheric temperature rises, more precipitation is likely to fall in the form of rain rather than snow. This means less water being stored as snowpack. Maurere et al. (2019) show that due to climate change, glacier ice loss rates across the Himalayas have accelerated from just 22 cm a year during 1975–2000 to 43 cm a year during 2000–2016.  Scientists also estimate that two-thirds of glaciers along the Hindu Kush and Himalaya ranges will be lost by 2100 if we fail to cut carbon emissions. Moreover, even if we succeed in limiting global warming to 1.5°C, a third of the ice will still be lost (Wester et al. 2019).

Rising temperatures are also changing the timing and magnitude of streamflow in glacier-fed rivers and the pace of polar ice melt. These changes will negatively affect human livelihoods, economies, and ecosystems, particularly in the countries across the high mountains in Asia that depend on meltwater for their drinking water supply, irrigation, mining, hydropower, agriculture, and recreation. The sea-level rise caused by the increase in polar ice melt will also affect coastal nations, and most of the impact will be felt in Asia. Specifically, six Asian countries—the People’s Republic of China, Viet Nam, Bangladesh, India, Indonesia, and Thailand—account for approximately 75% of the 300 million people on land projected (under moderate reductions in emissions) to be flooded due to sea-level rise by 2050 (Kulp and Strauss 2019). Glacier lake outburst floods arising from the glacial melting also threaten populations living downstream. Meanwhile, changes in the snowpack will also negatively impact people who generate their income from skiing and winter tourism.

As with the coronavirus disease (COVID-19) pandemic, climate change impacts are likely to play out disproportionately across Asian countries. Developing countries are most vulnerable and are among the least ready to respond to climate change impacts. Since people in Asia will mostly feel the impacts of climate change through a change in water systems, innovation and a transformation in water management are indispensable for climate change adaptation in the region. For example, the shrinking supply of glacial meltwater in India’s Ladakh region has led to the creation of ice stupas or manufactured glaciers. This innovative water management strategy allows farmers to have sufficient water to irrigate their crops during the spring months (Clouse 2017). Given that many Asian countries are dealing with similar climate change impacts, the international research community can contribute to building climate resilience in Asia by creating, analyzing, and sharing ideas and best practices for water management so that countries can learn from one another’s experiences and adopt measures suitable for their context.