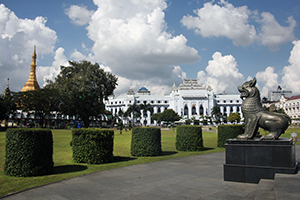 The coronavirus disease (COVID-19) has highlighted the importance of the civil service but has also, ironically, hindered its reform activities. Civil service personnel will have to work with government leaders to find the right balance between addressing public health and economic concerns and implementing policies for mitigating the effects of the pandemic. It is crucial that the civil service is equipped with the capacity and mindset to address this crisis. However, in Myanmar, COVID-19 has slowed down capacity building in the civil service. Recent news reports that one of Myanmar’s two civil service training institutes has been repurposed as a medical facility to handle the rising number of cases. We do not know how long this arrangement will last. This decision is an example of how this pandemic will, unfortunately, set back the progress of civil service reform in the country as the government has shifted its focus to the current crisis.

Since 2010, Myanmar has continued to implement political and economic reforms to address the multitude of issues facing the country after decades of isolation. Among the many areas that are up for reform is the civil service.

The Union Civil Service Board (UCSB), the entity tasked with handling civil service affairs, has been working with international organizations to institute reforms. The UCSB faces three main challenges in its path to reform: accountability issues1, lack of transparency, and insufficient resources.

These challenges are not unique to Myanmar. For example, when Singapore became newly independent after having been a British colony, it faced corruption issues, ethnic diversity, and an administration that was new to governing. Five decades later, Singapore now has one of the lowest rates of corruption in the world according to Transparency International.

Both citizens and civil service personnel in Myanmar seem to think that government processes lack transparency. The UCSB has acknowledged that citizens see government procedures and processes as complicated and opaque. They are not sure how to raise complaints and doubt whether any action would be taken even if they were to do so. A survey conducted on civil service personnel found that decisions made on recruitment, promotions, transfers, and other career-related matters are based on personal networks rather than merit.

The UCSB does not have the resources to adequately train civil service personnel for a world that is rapidly changing and increasingly complicated. A report on UCSB training institutes pointed out their reliance on external lecturers for teaching advanced courses. In addition, there are no written guidelines that clearly state how training activities should be carried out or evaluated. These activities are conducted on an ad-hoc basis, leading to inconsistencies in the training of civil service personnel.

Since it is the last year to implement the Strategic Action Plan, we will look at the progress of the reforms implemented until now. The UCSB and the United Nations Development Programme (UNDP) are continuing to work together to bring about the competency frameworks and performance-based assessment requirement and have consulted with stakeholders from national and local governments, UCSB’s institute rectors, and experts on proposed competency frameworks, performance management systems, and leadership development plans, according to state media. From online sources, it is unclear what kinds of discussions have taken place.

The UNDP is also working with the Central Statistical Organization, a government agency, and the UCSB to conduct the first nationwide public perception survey on the quality of service delivery in Myanmar. Only technical details about the survey have been released publicly.

Established in 2013, the Anti-Corruption Commission of Myanmar is responsible for investigating and deciding on the outcomes of corruption complaints. Amendments to the 2013 Anti-Corruption Law were made in 2018 to broaden the scope of the commission. As the commission began to charge high-level officials with corruption after these amendments were enacted, we can say that they have had a positive effect in tackling corruption in the country. While Myanmar has made towards achieving the goals in the Strategic Action Plan, implementing all of the broad and comprehensive reforms in the plan, is unlikely to be completed by 2020.

A UNDP publication discusses how the government of Singapore brought corruption under control through the strengthening of legislation and enforcement by the Corrupt Practices Investigation Bureau. While Myanmar has empowered the Anti-Corruption Commission through legislation, it should devote more resources to the commission.  The commission was criticized for only being able to prosecute 46 of the 10,000 complaints it received due to a lack of manpower. Therefore, more resources should be provided to the Anti-Corruption Commission to be able to carry out its work.

The Prevention of Corruption Act of Singapore protects the identities of informants. This practice is supported by the Organisation for Economic Co-operation and Development (OECD) as necessary to promote accountability, and Myanmar should also adopt protection measures for informants. Without the protection of informants’ identities, Myanmar may be missing out on potentially uncovering deeply rooted networks of corruption within its civil service.

The Singaporean civil service system is centered on meritocracy in order to ensure that only the best will be leading the country’s government institutions. In the short term, the UCSB should work on creating performance-based review schemes for non-gazetted officers2. Other ministries and government organizations should be encouraged to design their own performance assessment frameworks for the personnel they hire and submit these frameworks to the UCSB for review to ensure consistency across all government entities and all categories of personnel. Having a clear set of performance requirements and criteria for various levels of civil service positions will increase the transparency and accountability of civil service personnel.

Due to COVID-19, we are living in an uncertain world. No one can definitively say what the world will look like after this pandemic. Myanmar needs a capable civil service that can effectively deal with uncertain challenges that emerge in the future.
_____

1 Corruption is believed to be widespread among civil service personnel. The UCSB itself acknowledges that civil service personnel are also perceived to be unresponsive to complaints lodged by citizens. A survey conducted by the United Nations Development Programme showed that civil service personnel thought that small cases of bribery are justified as salaries are too low. One instance of corruption within the UCSB itself is a case involving two foreign universities, which were contracted to provide postgraduate courses to civil service personnel. News outlets reported the discovery of the false accreditation of these universities and the ties that one of the universities might have had to the Chairman of the UCSB and his nephew. While the UCSB has stopped working with the universities, members of the public called for investigations into the UCSB, but no action has been taken so far.
2 Non-gazetted officers (those working in administrative roles), as opposed to gazetted officials (those working in professional and managerial areas), are hired by individual ministries and government organizations. Rules and practices regarding these officers are handled by their respective ministries or organizations. These officers comprise the majority of civil service personnel in Myanmar.

Poe Oo is a master’s student at the University of Tokyo’s Graduate School of Public Policy and a former intern at ADBI.
View all posts by Poe Oo →