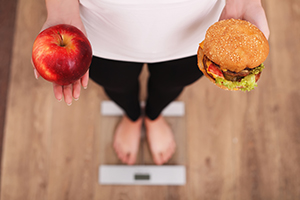 Increased prosperity in Asia and the Pacific has led to lifestyle changes with unwanted impacts. Studies have shown that as a result of economic progress, regions are shifting to a diet that is linked with noncommunicable diseases (NCDs), particularly overweight and obesity. The World Health Organization estimates for 2015 show that about 15 million people aged 30–69 years die annually because of NCDs (Waqanivalu 2018).

How overweight and obese is Asia and the Pacific?

Countries and regions in Asia and the Pacific have registered high rates of overweight and obesity (Helble and Francisco 2018). Two out of every five adults, or 1 billion people overall, are considered overweight or obese (Helble and Sato 2018).

Among countries in East Asia, prevalence of overweight and obesity is high in Mongolia at 49.4%. In Southeast Asia, 46.3% of Malaysia’s population is considered overweight or obese. Meanwhile in Central and West Asia and South Asia, Afghanistan (45.89%) and Maldives (40.3%) have high rates also, with other countries not far behind—Bhutan at 35.3% and Pakistan at 33.1%. Prevalence of overweight and obesity in the Pacific is almost double compared to other Asian countries with the highest rates in Samoa and Tonga (84.0 % and 86.1%, respectively), followed closely by Kiribati (79.1%), the Marshall Islands (76.9%), and the Federated States of Micronesia (74.9%).

As so-called “time bombs,” being overweight and obese has serious consequences for both the individual and for the state. It increases the risk of NCDs including heart disease, hypertension, stroke, diabetes, and cancer. And while the mortality rates associated with NCDs are overwhelming, the socioeconomic costs of NCDs are equally staggering. Findings suggest that NCDs can worsen poverty: treatment costs are high, exceeding as much as 25% of total household income. Long-term care, particularly for diabetes; out-of-pocket expenses; and household members leaving to care for the sick or other non-working members taking up jobs to be able to augment income used to cover health care costs—all these combined with poor health care systems in many countries in Asia can leave people vulnerable to chronic poverty.

The implications of being overweight and obese go beyond higher health care costs both for the individual and for the health care system (direct costs) to include costs related to decreased work productivity, disability, and higher mortality (indirect costs). But how do we measure the costs of overweight and obesity? Having data to accurately measure the direct and indirect costs is key in gauging the impacts—and knowing the disease burden will emphasize the seriousness of the epidemic.

There is a dearth in the literature looking at the absolute costs of overweight and obesity. On the one hand, studies measuring the direct costs are relatively few, with data on medical expenditures and procedures being sparse and hard to come by. Direct costs can be measured in two ways. The first is the epidemiological approach, which assumes that overweight and obesity contribute to certain diseases that generate medical costs for treatment. The second approach is an econometric approach that measures the additional medical costs borne by people considered overweight and obese (Chung 2018; Helble and Francisco 2018).

Measuring indirect costs, on the other hand, relies on the disability-adjusted life year (DALY) metric from the Global Burden of Disease Study 2010 developed by the Institute for Health Metrics and Evaluation where DALYs represent a year of healthy life lost due to premature death (mortality) as well as the time lived with disability (morbidity).

Estimates by Helble and Francisco (2018) show high direct costs in East Asia, in particular in Japan and the Republic of Korea. Japan has a relatively low prevalence rate of overweight and obesity at 23.3% and rather high direct costs at 15.47% of total health care costs. Japan’s absolute direct costs are estimated to be the highest in the region, primarily because of its advanced health care system. The Republic of Korea follows the same pattern as Japan, although the overweight and obesity prevalence rate is higher at 32.3% and direct costs are slightly lower at 14.4%.

Interestingly, the shares of indirect costs to total health care costs in East Asia are among the lowest in the region except for the People’s Republic of China and Mongolia. This can be attributed to relatively low prevalence rates.

The same can be said about the fast-growing Southeast Asian economies such as Singapore and Malaysia where absolute direct costs are among the highest in the region and shares to the total health care costs are 37.18% and 8.40%, respectively. Indonesia, Thailand, and the Philippines have comparable total direct costs. However, Indonesia’s total absolute value of indirect costs is among the highest in the region, at 10.39% of the country’s total health care costs.

Countries in South Asia, compared to the other regions, have the lowest proportion of direct costs. Indirect costs are relatively similar to other countries with India having the highest absolute indirect costs.

Finally, looking at the Pacific, indirect costs are the highest in the region. Indirect costs range from as much as 68.66% of total health care costs in Palau to 16.79% in Solomon Islands. To add perspective, we look at the costs in equivalent gross domestic product (GDP) terms. For Palau, for example, indirect costs equate to as much as 6.36% of its GDP.

Low direct and high indirect costs: A cause for concern

While current estimates of the costs of being overweight and obese may seem small, with the continuous increase in the rates of overweight and obesity all over the world, and particularly in the developing economies of Asia and the Pacific, we anticipate increasing costs, which could undermine the development of the region.
_____

← Financial development and stability in the People’s Republic of China: Evaluating the policy challenges
Malaysia’s affirmative action should be based on need →