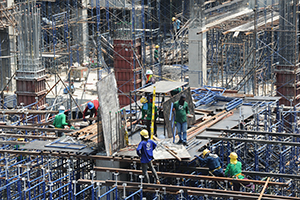 The study of the labor income share plays an important role in understanding the relationship between national income and personal income. However, most of the empirical studies on the labor income share are conducted at the country level, while the limited number of industry-level analyses focus primarily on advanced countries due to limited data availability.

In order to analyze the sector-level labor income share incorporating data from developing countries, we construct a new dataset at the 10-sector level.1 We collect information from three secondary data sources: the Groningen Growth Data Center 10-Sector Database, the Socio-Economic Account (SEA),2 and ILOSTAT.3 These datasets allow us to calculate the sectoral labor income shares for 53 countries across six regions.4 Of the countries, 20 are classified as developing countries.5 In this article, we would like to share the preliminary findings from the new dataset at the three-sector level to unveil the bigger picture.

In Figure 1, we show the unweighted regional averages of the labor income share in three broad categories.6 One must note that the numbers could be biased due to potential measurement error arising from sector-specific characteristics. For example, the labor income share could be overestimated for industries with many self-employed or seasonal workers, such as the agriculture and construction industries. This is because it is difficult to capture all the workers in such industries, and, as some studies suggest, in surveys, the self-employed tend to report incomes that are higher than their actual incomes. 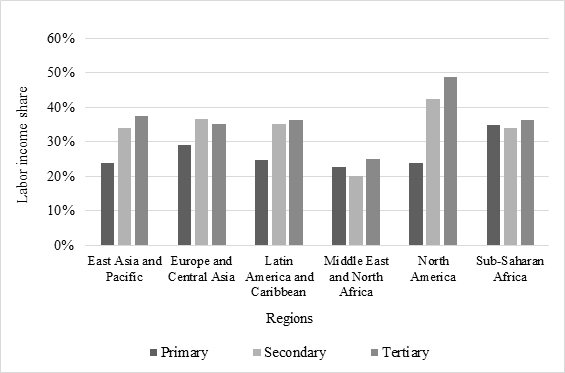 With these caveats in mind, we find that the tertiary sector offers the most generous rewards to labor. One exception is for the Europe and Central Asia region, where the secondary sector’s ratio of labor income to sectoral value added is larger than the other two sectors. In contrast, labor in the primary sector receives the smallest share of income and is significantly lower compared to the other sectors in all regions but two. The two exceptions are the Middle East and North Africa region and the sub-Saharan Africa region. Interestingly, both regions have their smallest labor income shares in the secondary sector, and the differences between the three sectors are smaller than for the other regions.

To see the relationship between sectors, we plot the changes in the labor income share in the secondary sector against those in the tertiary sector. The left-hand panel of Figure 2 shows the scatter plot for 22 countries in the Europe and Central Asian region. A quick glance at the graph suggests a positive correlation between the changes in the two sectors.

LIS = labor income share.
Note: The change in the labor income share is based on the starting and the ending year of the sample available for each country. For further details, see: Oishi and Paul (2018), Sectoral Labor Income Share Dynamics: Cross-Country Evidence from a Novel Data Set. ADBI Working Paper No. 875.
Source: Authors’ calculations.

Yoko Oishi is a research associate at the Asian Development Bank Institute.
View all posts by Yoko Oishi →

← Productive services with the help of internet technologies
What can services trade policy do for sustainable development? →