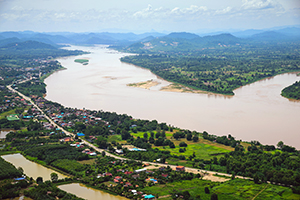 Rapid economic development in recent decades has transformed Southeast Asia and prepared the region to join international production networks, which allow greater exports of manufacturing products, textiles, and other primary high-quality valued added products to the international market. This economic development has been achieved thanks to investments from around the globe into the region as a result of a favorable labor force, connectivity and innovation growth, and regional political stability as driven by the Association of Southeast Asian Nations (ASEAN) vision. Faster connectivity along with human resource development in the Southeast Asia region, especially the Mekong subregion, has provided many opportunities for the region for growth and increased the social well-being of the people through income generation and employment. Connectivity through roads, railways, sea, and air has compressed time and space, allowing goods and services to flow internationally in a much faster manner and more efficiently in terms of cost reductions in logistics and, thus, has created a favorable functioning market for supplying goods and services linking production from the Mekong subregion into regional and global supply value chains. Besides hard infrastructure connectivity, the Mekong subregion has also progressed steadily in soft infrastructure as terms, regulations, and standards have developed to facilitate trade and investment in the region as well as outside the region.

The coordinated development of soft and hard infrastructure is essential for maintaining growth in the region. The new international division of labor calls for a novel approach to infrastructure development, in which the Mekong subregion has been prepared to participate actively for the promotion of economic corridors, including the Southern Economic Corridor (SSEC), East-West Economic Corridor (EWEC), and North-South Economic Corridor (NSEC). These economic corridors, together with the fast acceleration of domestic infrastructure development with special economic zones, urban amenities and other economic activities, have promoted the region to some extent to participate in production networks, reducing the cost of service links that connect remote places of production to urban agglomeration. Mekong subregional connectivity is just one part of the puzzle of larger connectivity in ASEAN and, further, ASEAN connectivity to the rest of the world. Another initiative is the One Belt One Road (OBOR) initiative, led by the People’s Republic of China (PRC), which is a large connectivity development strategy linking the PRC to Eurasian countries and the rest of Asia.

The Mekong subregion has embarked on fast progress toward infrastructure development in recent decades. Thus, quality infrastructure, connectivity, and innovation are keys for ensuring prosperity and sustainable development in the region. The development of connectivity and innovation promotes agglomeration forces and dispersion forces generated by production–consumption interactions in both internal and external economies in which people and ideas can move more easily (Kimura 2018). One practical example of new economic geography creating a “location advantage” through connectivity and innovation is the Cambodian labor force migration. Currently, about 1 million out of 16 million Cambodians are in Thailand working as unskilled labour—in intensive sectors and the informal sector—rather than in Phnom Penh. The question is how Phnom Penh can attract labour from rural areas and, at the same time, invite production from Thailand. If the wage gap between Bangkok and Phnom Penh is too large, people will not come to Phnom Penh, but production blocks may be motivated to come. On the other hand, if the wage gap is too small, production blocks will not come, but people may flow into Phnom Penh. How can Phnom Penh attract both production blocks and people? The answer is the improvement of location advantages and liveability in Phnom Penh (Economic Research Institute for ASEAN and East Asia 2015).

Mekong-Japan connectivity aims to promote quality infrastructure development in the Mekong region and enhance institutional connectivity through the improvement of systems, the development of special economic zones and other industrial bases, industrial promotion measures, improvements in customs procedures, and people-to-people connectivity so that the whole region can benefit from growth. The key pillars of cooperation development for infrastructure are to fill in the missing links in the East-West and Southern Economic Corridors; connect the corridors more smoothly through the improvement of systems, such as customs procedures, to promote land development along the corridors (e.g., through the development of industrial parks and industrial promotion measures); improve access from neighboring areas to corridors so that the region can develop as a whole; and develop the industrial human resources for supporting growth in the region and strengthening people-to-people networks.

During the Mekong-Japan Cooperation (MJC) meeting in 2018, it was reported that in 2015, Japan pledged ¥50 billion of official development assistance (ODA) over 3 years in order to support quality growth, and it has already implemented two-thirds or more of that ODA. In recent years, Japan has advanced cooperation relating to infrastructure development, such as Cambodia’s Sihanoukville Port, Myanmar’s Yangon-Mandalay railway, and Thailand’s high-speed railway. Japan is contributing to the development of “quality infrastructure,” but is simultaneously moving ahead with expediting yen loans. The Japanese government also expects that the Mekong countries’ governments will undertake initiatives to expedite this process. Strengthening soft connectivity is the key to reducing distribution costs and facilitating trade within the region.

Connectivity and innovation play central roles in economic growth. Thus, countries in the Mekong subregion, particularly Cambodia, the Lao People’s Democratic Republic, Myanmar, Thailand, and Viet Nam (CLMTV), require different levels of policy environment to facilitate investment opportunities. Among the key development partners, it has been recognized that MJC has brought about quality infrastructure, helping to build human resources in CLMTV and bring knowledge and innovation to the region. It is worth mentioning that the Asian Development Bank’s investment in the Mekong subregion and the MJC ODA, together with other investment partners, such as the People’s Republic of China, the eurozone, and the United States, can and will transform this region to catch up with other advanced countries in the near future.

Below are key recommendations for the Mekong subregion, especially CLMTV:

The views expressed here are personal and do not reflect ERIA’s position.
_____

← Productivity spillovers from services firms in low- and middle-income countries: What is the role of firm characteristics and services liberalization?
No matter how poor you are, there is always a way to improve sanitation →