Productive services with the help of internet technologies 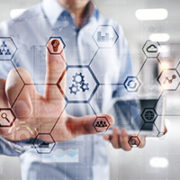 One long-standing concern in the economic field has been that services contribute little to economic development. Services would suffer from a so-called Baumol’s cost disease (Baumol 1967), meaning factors such as labor cannot be easily substituted for more productive factors using existing technologies, as it happens in manufacturing. Over time, this would lead services to become a drag on the economy relative to other more productive industries.
Comment