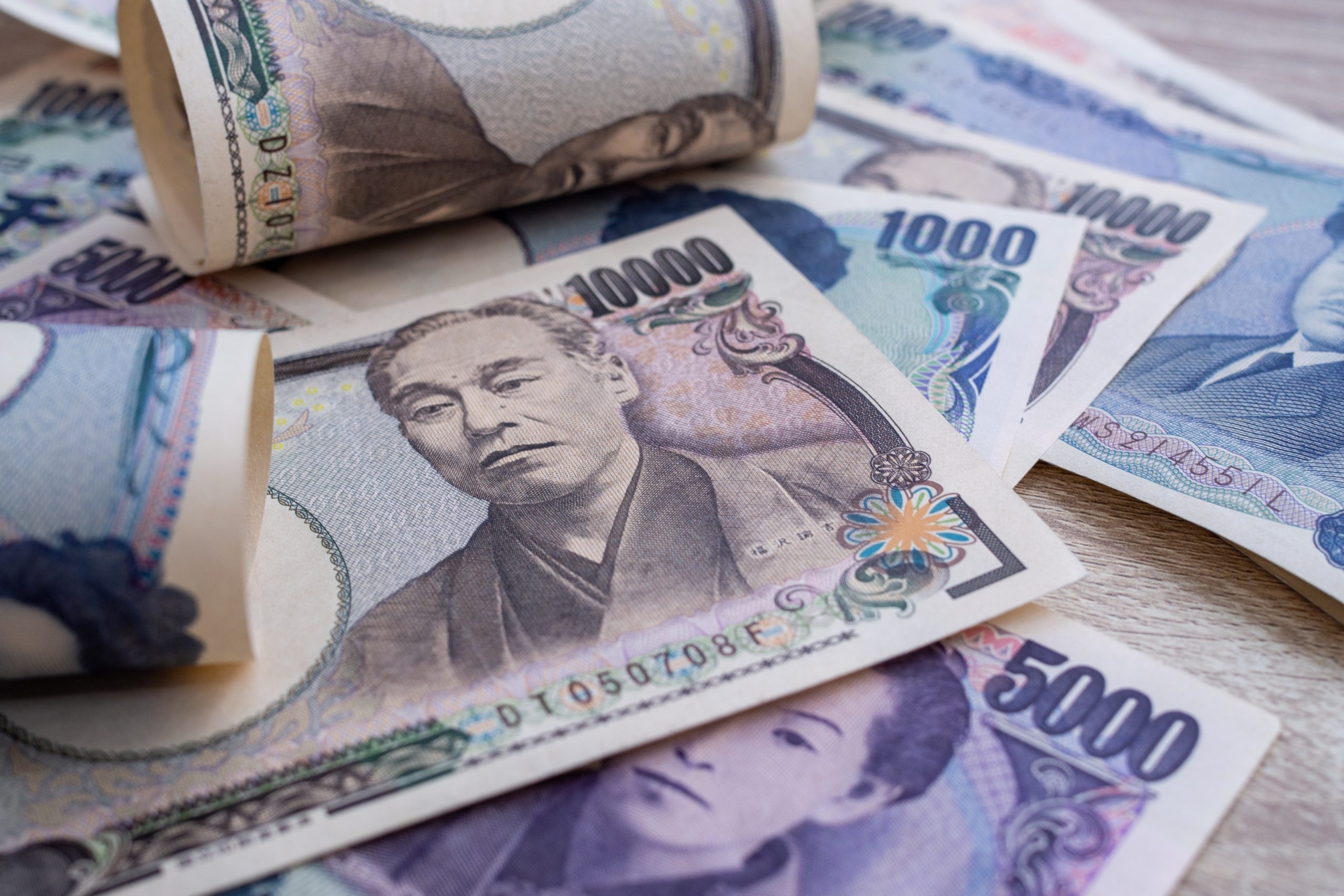 The Japanese yen is widely regarded as a safe-haven destination for investors in times of heightened stress in markets or financial crisis episodes (e.g., Fatum and Yamamoto (2015) and Ranaldo and Söderlind (2010)). This has been linked to Japan’s dominant position globally as the world’s largest creditor and its substantial holdings of net foreign assets (e.g., Rogoff and Tashiro (2015) and Habib and Stracca (2012)). The yen’s safe-haven status has been called into question in 2022, however, after depreciating sharply following rising energy prices due to the Russian invasion of Ukraine and widening global interest rate differentials relative to Japan. At the end of April 2022, the yen reached its weakest level in over 2 decades, breaching ¥130 relative to the US dollar.

Some context can be provided by taking a historical perspective on yen fluctuations (Figure 1). At the start of the global financial crisis in 2007, investors tilted their portfolios toward the yen in search of safety amid prevailing high global risk aversion. The yen appreciated strongly as a result, with evidence of negative real spillovers in Japan and persistence in domestic economic policy uncertainty (e.g., Beirne and Sugandi (2022)). This appreciation was bolstered by the Tōhoku earthquake and tsunami of March 2011 as Japanese investors sold assets denominated in foreign currency. At the end of 2012, the announcement by new Japanese Prime Minister Shinzo Abe that the Bank of Japan should aggressively increase the money supply to stimulate inflation (part of the so-called “Abenomics” strategy) triggered a yen depreciation. Global risk appetite resumed as investors engaged in yen carry trade operations, borrowing in the low-yielding yen to fund investment in risky assets abroad. An equity market shock and slowdown in the People’s Republic of China (PRC) at the end of 2015 increased global market volatility, leading to yen safe-haven flows, marking the end of the depreciating trend that had been in place since the end of 2012. Since 2017 until recently, the yen has been relatively stable, even during the COVID-19 crisis, although a mild appreciation was observed in the first stage of the pandemic, which later reverted towards the end of 2020 as uncertainty declined.

The Russian–Ukrainian conflict marks a turning point, however, whereby an abrupt and disorderly yen depreciation has been underway since March 2022. As the global economy continued to recover from the COVID-19 pandemic during Q1 2022, the Russian invasion of Ukraine created unexpected disruptions in global supply chains and energy price rises, setting back post-pandemic recovery efforts (e.g., Subacchi et al. (2022)). In the period since the conflict began until mid-May 2022, the yen has fallen by around 12% against the dollar. Meanwhile, oil prices rose by around 17% to $114 per barrel and the spread between US and Japanese long-term bond yields widened by around 90 basis points. 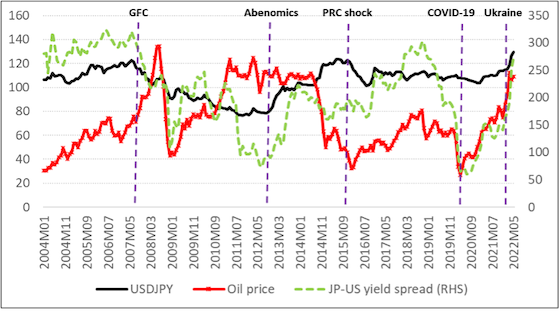 Notes: USDJPY denotes yen per $1 in nominal terms. An upward shift in USDJPY indicates a yen depreciation, and vice versa. Oil prices (per barrel) are denominated in US dollars. Interest rate differentials are denoted by the JP-US yield spread (based on 10-year bonds): an upward shift indicates a more negative widening of the spread (in basis points). The scale is inverted for illustrative purposes.
Source: Constructed by the author using Bloomberg data. Latest observation: 17 May 2022.

While “risk-off” episodes of the past have led to yen appreciations as market risk aversion led to flows of foreign capital into Japan (e.g., the global financial crisis, PRC shock, and first stage of COVID-19), the Russian Federation–Ukraine conflict is having the opposite effect. The first reason relates to interest rate differentials in Japan relative to the US. Unlike in past crises, the US is currently in the midst of a cycle of monetary policy tightening in the face of high post-pandemic inflation. Previously, accommodative monetary policy globally, in particular by the US, typically prevailed during crisis episodes. Meanwhile, the Bank of Japan has not embarked on a tightening interest rate cycle in 2022, partly related to the weaker post-pandemic recovery in economic growth. US relative to Japanese interest rate differentials and higher rates of return in the US have led to flows of foreign capital to the US and an appreciation of the US dollar relative to the yen, as shown in Figure 1.

A second factor weighing on the yen relates to commodity price developments directly. As these are priced in US dollars and Japan imports the vast majority of its energy requirements from abroad (almost all of its crude oil needs), rises in the prices of commodities due to the Russian–Ukrainian conflict are reinforcing dollar strength relative to the yen. A third and related factor is the relative current account positions in the US and Japan, with rising commodity prices placing pressure on Japan’s current account surplus. As Japan’s import prices are rising more sharply than export prices, this is leading to a worsening of the balance of payments.

Abrupt moves in currencies lead to market uncertainty and negative sentiment. While the yen depreciation is positive for Japanese exporters, it could potentially weigh on domestic demand as imported inflation via higher energy prices reduces the purchasing power of households and firms in Japan. Although very low inflation or even deflation has been a feature of the Japanese economy since the 1990s, a rate of 1.9% was recorded for April 2022, the highest year-on-year change in consumer prices in 7 years. It remains unclear, however, the extent to which this affects inflation expectations over the medium term. Japanese businesses are typically unwilling to pass on price rises to consumers for fear of losing them to competitors.

The duration of prevailing external price pressures is key. The longer it goes on, the more pressure on Japanese businesses to pass on at least some of the price increases to consumers, and this may also help to stimulate aggregate demand. This would then make wage rises more feasible for Japanese firms. They remain reluctant on wage rises for a number of reasons, such as protracted periods of weak economic growth, low inflation, and low profitability. Changes in price-setting behavior and mindset by firms in Japan would be necessary to stimulate rising inflation expectations by passing through price rises in raw materials and commodities to consumers. Demographic factors also play a role in Japan, with an aging population weakening the outlook for aggregate demand and, therefore, inflation. Measures aimed at stimulating wage increases by firms may help to kick-start rising inflation expectations.

While there is some uncertainty about the persistence and duration of the prevailing external “cost-push” factors driving inflation in Japan (i.e., supply chain disruptions and energy price spillovers), it could be the case that there would be second-round effects over the medium-term that would require monetary policy action. On the other hand, to the extent that the Bank of Japan regards them as being transitory, then it would be unlikely to alter its monetary policy stance.

The pandemic and the Ukraine invasion episodes will eventually pass, and indeed the recovery from the pandemic is already well underway not only in Japan but globally. For Japan, reducing reliance on imported energy and building diversified supply chains with less concentration risk will be important for sustainability in the economic growth outlook. Achieving an environment of price stability in line with the Bank of Japan’s inflation target of 2% will be important for stimulating aggregate demand over the longer term. Looking ahead into Q3 and Q4 2022, while uncertainty prevails, the risks for the yen would be a sharper than expected tightening in US monetary policy, a protracted conflict in Ukraine, and stronger than anticipated rises in commodity prices, which would lead to further abrupt and unexpected yen depreciation. Such a scenario could prompt large-scale foreign exchange intervention by Japan to attempt to halt the slide.

John Beirne is vice-chair of research and a senior research fellow at ADBI.
View all posts by John Beirne →
← Resilient education systems critical for learning continuity during crises
Digital governance can unlock connectivity potential and transformation →