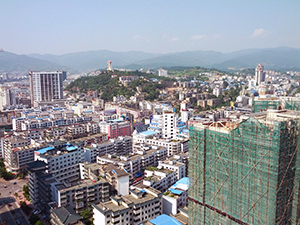 In recent years, the People’s Republic of China (PRC) has accelerated its urbanization process and increased its urbanization rate from 35.88% in 2000 to 56.7% in 2016, equating to over 1% year-on-year growth. The PRC proposed the “people-oriented” New-type Urbanization Plan in 2014 to definitively release further domestic demand potential, promote social equity and welfare improvements, and facilitate economic, social, and ecological integrated development. Since effective development, inclusive development, and sustainable development are the three key elements of new-type urbanization, the sustainability of financing is a common concern. Three important issues arise: the reason for financing, how to finance, and how to improve efficiency. The reason for financing relates to the appropriate scale of urbanization financing, namely the allocation of resources for urbanization; how to finance relates to the approach to mobilizing urbanization funds; and how to improve efficiency relates to the enhancement of the efficiency of the financing mechanism.

Source: National Bureau of Statistics of the PRC.

Features of new-type urbanization from the financing perspective

From extensive and land-oriented urbanization to intensive, people-oriented, high-quality urbanization. Urbanization development in the PRC was once characterized by urban land expansion, large-scale urban construction, face-saving projects, and deindustrialization. The urbanization process ignored the dominant role of the market in resource allocation, and rural migrant workers often did not have security of education, medical care, social security, or affordable housing, etc. Thus, a “new dualistic” structure existed between rural migrant workers and urban residents. New-type urbanization is people oriented and places emphasis on the quality and coordinated development of industrialization and agricultural modernization instead of the pure pursuit of urbanization development speed. In a sense, new-type urbanization can be considered as a strategic choice to eradicate the “new dualistic” structure. As such, the government must raise new-type urbanization funds for the equalization of fundamental public services.

From reinforced concrete, identical cities to characteristic cities and towns with green hills, clear water, and nostalgic elements. Some local government officials have blindly pursued mass-demolishing and mass-construction urbanization to further their careers while ignoring the consequences of their urbanization projects. As a result, reinforced-concrete cities have replaced natural forests and green spaces. In contrast, new-type urbanization advocates the uniqueness of cities, the adjustment of measures to local conditions, and green development and financing for the environment and ecology.

From local government financing vehicles and land financing to local financing modes with strict budget constraints on local government debt. It is not difficult to see the low level of social capital in the PRC’s urbanization. To make up for the shortage of funds for infrastructure construction, urban construction has increasingly relied on land sale revenue or land mortgages, leading to rising implicit and explicit debt and higher debt risk. New-type urbanization requires the government to absorb low-cost social capital and participate in construction via the market mechanism. The government must also mobilize resources through fiscal and taxation policies, local bonds, and public–private partnerships based on marketization operation and management to solve the problem of construction and maintenance funds shortages and lower financial risk. From this perspective, new-type urbanization places emphasis not only the financing mode but also financing efficiency.

Although new-type urbanization and innovations in the local government debt system, etc. have reduced non-standard financing behavior to some extent, the deep problems in the system and its mechanisms cannot be completely eradicated in the short run. New-type urbanization still faces financing bottlenecks and new problems.

Obscure boundaries. Obscure boundaries are reflected in two respects. First, the vague boundary between the government and the market leads to the situation where the scale of government financing exceeds reasonable limits during urbanization. Second, as a result of the vague administrative power or authority of the central government and local governments, local governments suffer heavy expenditure duties in many areas. The PRC has established a fund guarantee system for the equalization of fundamental public services for county-level governments, which has relieved the situation to some extent. However, misplaced resource allocation is not conducive to the reasonable sharing of urbanization costs or financing for efficiency.

Capital bottlenecks. Some local governments obviously lack enough capital to break the new-dualistic structure. With respect to the taxation system arrangement, because of the imperfect local tax mechanism, local governments are not entitled to the corresponding taxation rights that are held by the central government and, therefore, fail to effectively mobilize local resources. The transfer payment system has improved the situation at present, but special transfer payments still account for a large percentage, showing that the science and fairness of the transfer payment system need to be improved.

Path dependence. Due to the preference for expanding the budget scale and decreasing the shortage of infrastructure funds, some local governments greatly depend upon land sale revenue, and some even resort to a disguised form of financing under the name of “government purchase of public services” and fake public–private partnerships. New policies for local debt management have encouraged local governments to broaden their sources of income and reduce expenditure, but moral risk and adverse selection behavior still exist. Meanwhile, there is room for improvement in the efficiency of public expenditure and the financing mechanism.

New-type urbanization is people oriented. The issues of how to truly realize the concept, remove institutional barriers, clarify the border between the government and market, and mobilize social forces to participate to the greatest degree depend on intensified reforms, institutional constraints, policy incentives, and diversified financing channels.

A distinct boundary is conducive to determining the financing scale of new-type urbanization and sharing the costs. The first step is to clarify the boundary between the government and the market. This is the precondition for determining the financing scale of new-type urbanization. The market must play a decisive role in resource allocation and support industrial selection and development in the urbanization process. Meanwhile, the government should take charge of the areas of concern and better exert its functions in a variety of respects, such as by creating a conducive institutional environment, providing infrastructure, delivering public services, and enhancing social governance.

The second step is to clarify the administrative power and authority and the duties of expenditure for the respective governments. The power and authority of governments at all levels should be divided as far as possible with fewer overlapping responsibilities based on the attributes of public goods. They should abide by the overall principles of efficiency and beneficiary and incentive compatibility and take into account information symmetry to form a detailed list of the powers, authorities, and duties of expenditure at the central, provincial, and municipal/county (district) levels and reasonably share the urbanization costs.

Orderly prioritization and the rational allocation of resources are the keys to high-quality, new-type urbanization. Due to the roles played by the government and the market in urbanization, the funds necessary for industrial development should be mainly allocated by the market, while government financing should mainly cover the four previously mentioned aspects: creating a conducive institutional environment, providing infrastructure, delivering public services, and enhancing social governance.

First, “financing” does not merely refer to capital but is a comprehensive concept covering capital, resources, and assets. Second, intergovernmental revenue should also be divided reasonably so that governments at all levels can have the sufficient financial resources to execute their powers and perform duties of expenditure, including the key tasks of improving the tax system and the transfer payment system. The top priorities are to confer a certain level of authority of tax administration upon local governments and nurture a complete and stable local tax system, such as by collecting real estate taxes from individual non-commercial properties. They should also further improve the transfer payment system, increase the proportion of general expenditure, and improve allocation methods. Third, with respect to risk prevention at the time of issuing local government bonds, the debt scale should be set in a scientific and reasonable way with reference to the demand for urbanization funds.

Improve the efficiency of the financing mechanism to avoid moral risk and adverse selection. Improvement in the efficiency of the financing mechanism depends upon the optimized institutional supply and an improved level of public governance. The government should enhance budget constraints, optimize the fiscal expenditure structure, and enhance fiscal transparency. It should also prepare medium-term budgets, strengthen the ability of fiscal policies for dealing with structural challenges, provide stable fund guarantees for necessary infrastructure projects during the process of new-type urbanization, overcome short-term governmental acts, and ensure the consistency and stability of policies.

As for the standardized management of government debt, in addition to the debt repayment system and risk-warning mechanism, the establishment of a budget control system for local government debt is important. The central government should proactively and comprehensively promote government accounting reforms while requiring the preparation of balance sheets on an accrual basis and conducting comprehensive assessments of the financial positions at all levels of government. Finally, an accountability system should be implemented as a warning for officials, just like the sword of Damocles, as a method of exposing a variety of deceptive behavior, such as fake public–private partnerships, and effectively preventing decision-making and fiscal risks.

← Innovations in managing local government debt in the People’s Republic of China
Opening-up in the upper middle-income stage: Implications from international experiences →