Exploring the implications of TPP negotiations for Latin America 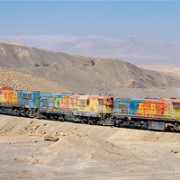 Chile, Mexico, and Peru are the three Latin American countries participating in the negotiations of the Trans-Pacific Partnership Agreement (TPP). Although these countries have cultural and geographical proximity, they exhibit different export structures and consequently different objectives toward the ongoing TPP negotiations. Even more intriguing is to understand the particular interests of each country in light of the key issues being negotiated and discussed, such as agriculture, intellectual property rights, and trade in services.
Comment