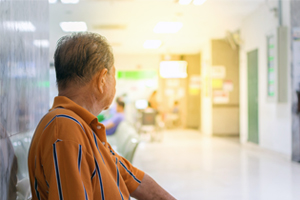 Asia is advancing toward becoming a gray society, though some countries are in the early stages and some are more advanced. The longevity revolution is being demonstrated through longer life expectancies due to medical innovation and improvements in medical care, as well as people having healthier lifestyles. Meanwhile, a continuously decreasing trend in fertility rates is being witnessed across the region. These two factors combined create the demographic transition of population aging. This demographic transition is not new, and its socioeconomic impacts have spread widely in many economies in Asia and the Pacific.

Population aging is a global phenomenon that Asia is experiencing. The United Nations (2019) forecasts that by 2050, the global number of persons above 65 years old will double to over 1.5 billion, with the largest increase projected to occur in East and Southeast Asia to reach 573 million (Figure 1). The proportion of the aged in Asia compared to the global aged population has grown since the 1980s. Among others, Japan, the People’s Republic of China (PRC), the Republic of Korea, Singapore, and Taipei,China are facing this serious challenge. The speed of population aging is the fastest in the last three economies, meaning that by 2050, Asia will continue to have the largest share of the world’s aged population, and the rate of aging will accelerate and have broader coverage. 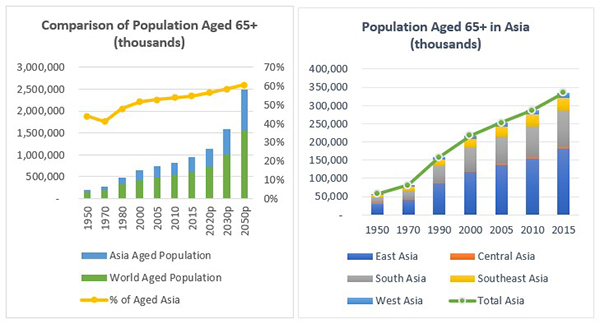 Although fertility rates have decreased around the world, Asia’s fertility trend has dropped even more dramatically and faster than expected, from almost as high as 5% in 1950 to nearly 2% in 2020 (Figure 2). Due to such circumstances, it is unavoidable that the old-age dependency ratio  of the total population continues to increase. The dependency rates in Europe, North America, and Australia are higher as a result of better medical technology, healthcare, and social security systems. Asia and Latin America and the Caribbean are forecasted to have a sharp increase in the ratio. Unfortunately, many economies in these regions are not well equipped with advanced medical services or effective social security systems. A challenge then emerges that some developing countries may get old before getting rich.

In Asia, countries can be categorized into three groups based their stage of demographic transition. Japan, the Republic of Korea, and Singapore are in tier one, as the countries have entered the aged society where life expectancy has grown comparatively higher over time and the total fertility rate has stayed constant. Japan has experienced the most severe degree of population aging, with a negative population growth from 2010 and the highest proportion of people aged over 65 in the world. The second tier, which includes the PRC, Thailand, and Viet Nam, demonstrates a gradual decline in the total fertility rate as life expectancy continues to go up. The last tier of younger population economies, i.e., Indonesia and the Philippines, reveals comparatively higher total fertility rates but lower life expectancy compared to other Asian countries.

Much of the literature argues that an increase in the aging population can negatively impact economic productivity. Generally, population aging can have multifaceted implications on economic growth—some studies suggest downward pressure on gross output and returns to capital, while some point out demographic dividends. Theoretically, the early phase of demographic transition has a larger proportion of workers, which increases aggregate consumption, cumulative investment, and total labor inputs—thus, output increases. As the transition progresses, economies experience a significant drop in labor supply due to lower total fertility rates and a decrease in the mortality rate, which reduces aggregate output as well as domestic savings. Though lower productivity is not necessarily implied from a rising aging population, changes in patterns of economic behavior are observed toward lower consumption and lower investment, which in turn hamper overall economic growth (ADBI, OECD, and ILO 2020).

A shrinking working population and lower productivity negatively affect government tax revenue, while a growing aging or aged population creates a fiscal burden through an increase in public health expenditure. The challenge then emerges of how to balance fiscal revenue against the increasing burdens from social security and pension systems and rising healthcare expenditures (Yoshino, Kim, and Sirivunnabood 2019).

To deal with these challenges and achieve fiscal sustainability, policy makers must manage revenue and spending together. Policies can be adopted to maintain the tax-payer base; for example, enhancing the participation of female and senior workers in the labor market. Another option is a shift in the tax mix. Japan, to compensate for a potential shortfall in individual income tax, increased its consumption tax from 8% to 10% since September 2019. Other developed countries have turned their focus to environmental taxes, including carbon and emission taxes, to raise substantial government revenue without compromising efficiency. It is a no brainer that in response to the drastic imbalance, fiscal reforms are needed for an effective tax system along with a thorough review of government spending. The review should be done to stabilize public debt and ensure efficiency. A cut or removal of unnecessary subsidies that do not translate to social and economic inclusiveness must be prioritized. For developing economies, strengthening tax administration can help to enhance the revenue-generating capacity of governments, and a thorough review procedure is also required. Nonetheless, there is no one bullet for all when it comes to fiscal design. The tax system should be designed and customized subject to each economy’s characteristics and demographic stage. Some changes in fiscal design may have more impact and be more politically feasible if done earlier than later (OECD 2019).

In addition to fiscal policies, social security systems as well as public and private pension schemes must be strengthened, taking into account socioeconomic factors, such as human capital, financial education, labor movement, informality, and equality.

New challenges always emerge to test the ability of governments to maintain fiscal sustainability. Recently, the fast spread of COVID-19 has not only threatened people’s lives, particularly those in vulnerable groups, but has also caused public health turbulence and disruption to the fiscal balance as governments are dealing with the social and economic impacts. The elderly will be the most affected group, especially those who still work in the informal sector. They face significant risks of developing severe symptoms and being harmed by COVID-19. Beyond this, the pandemic can push older people into poverty and isolation (UN 2020b). They are likely to become more vulnerable if they need aged care or stay in a nursing home. In parallel, this also implies that healthcare expenditure will increase in an aging society. It is unfortunate to say that longer lives may increase the costs of the pandemic.

Efforts to protect older populations and maintain fiscal sustainability in the face of the pandemic are needed but challenging. The priority is to design COVID-19 responses that recognize age-related programs, taking into account the risks faced by older people (Wyse 2020). Protection and prevention, as well as infection control protocols, must be in place to ensure safety for older people, particularly those in need of age-related care. It is important to equip family members and caregivers with knowledge of health services, sanitation, and humanitarian support. Additionally, promoting care and support across the life cycle is essential by investing in universal healthcare coverage and expanding the coverage of social pensions and protection schemes to aged groups. A valuable lesson learned from this pandemic for all governments is that it is necessary and mandatory to prepare the required fiscal space for these kinds of unprecedented circumstances.
_____