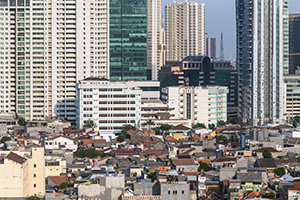 Income inequality is one of the most profound social, economic, and political challenges of our time. A survey conducted by Pew Research Center (2014) found that more than 60% of worldwide respondents regard the gap between the rich and the poor as a major concern. Piketty (2014) draws the unequivocal conclusion that growing inequality between the rich and the poor—between the owners of capital and the rest of society—is the normal state of affairs under capitalism, and that periods of decreasing inequality, such as during a post-war boom, are the exception, not the rule. The income gap is at its highest level in decades for advanced economies (Dabla-Norris et al. 2015), while the inequality trend has been rising in many developing countries. In Asia, despite recent economic growth, income distribution has been worsening as well. Inequality for the Asian region as a whole has grown significantly, rising by almost 42% in around 2 decades.

Many factors, such as globalization, biased technological change, labor market imperfections, education, fiscal policy, and demographic changes, among others, have been identified as drivers of growing income inequality. Although globalization spurs economic growth, it can also affect income distribution if trade increases the differentials in the returns to education and skills, leading to the marginalization of certain groups of people or geographic regions. Liberalization may also not by accompanied by the development of adequate institutions and governance. Meanwhile, improvements in technology have dramatically augmented productivity, but they have also affected income distributions by altering the rate of return on assets, favoring capital over labor as well as skilled labor over unskilled labor. Flexible labor markets promote economic dynamism through the reallocation of resources from less-productive to more-productive firms. However, greater flexibility can increase the risks disproportionately for low-skilled workers (Alvaredo et al. 2013), exacerbating income inequality. Education is often seen as the primary engine for upward mobility. However, unequal access to education has increased income inequality in countries where the rich continue to have access to premium education while the poor drop out or fail. Progressive taxation, usually measured by the top corporate tax rate or top personal tax rate, is associated with lower income inequality in Asia (IMF 2016). However, in some Asian countries, such as the Philippines, poor administration has significantly constrained government tax collection (ADB 2009), which in turn has impacted public spending and driven up inequality.

High and persistent income inequality can significantly impede growth, cause crises, and weaken demand (IMF 2015; Ostry and Berg 2011). Specifically, a 1 percentage point increase in the income share of the top 20% is associated with a 0.08 percentage point decrease in gross domestic product growth in the following 5 years. Growing disparities can entail huge social costs by undermining individuals’ education and occupational choices, damaging trust and social cohesion, undermining the quality of governance, and increasing the pressure for inefficient populist policies. Moreover, income distribution affects a country’s political structure. If high inequality prevents lower-income groups from influencing political decisions, it may result in a loss of trust and generate political instability (Alesina and Perotti 1996; Keefer and Knack 2002).

Income inequality is not only itself an important dimension of development, but it also has implications for governments’ efforts to fight poverty, sustain growth, and maintain social cohesion. It is pertinent to adopt appropriate policy measures. A recent volume published by ADBI, Demystifying Rising Inequality in Asia, contributes to the existing literature by focusing on three broad themes discussed in three parts. The first three chapters in Part I offer an overview of inequality in Asia; Part II focuses on the drivers of rising inequality in Asia; and Part III presents country case studies. It is hoped that this volume will inform and initiate policy debates for tackling the challenge of rising inequality in Asia. Policy measures that create equality of opportunity, equal access to public goods and services, reduce corruption, and improve the quality of institutions and governance will be instrumental in reducing income inequality across the region.

Bihong Huang is a research fellow at the Asian Development Bank Institute, Tokyo.
View all posts by Bihong Huang →