What Do Structural Economic Reforms Promise for the Future of Azerbaijan? 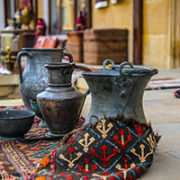 After the oil price crunch in mid-2014, Azerbaijan entered into a new stage of economic development. During 2004–2014, thanks to high oil prices, Azerbaijan achieved substantial growth rates, which were accompanied by improved social conditions and macroeconomic stability. Azerbaijan’s average annual growth rate during 2000–2013 of 11.3% played a key role in the improvement of the country’s international economic ranking.
Comment